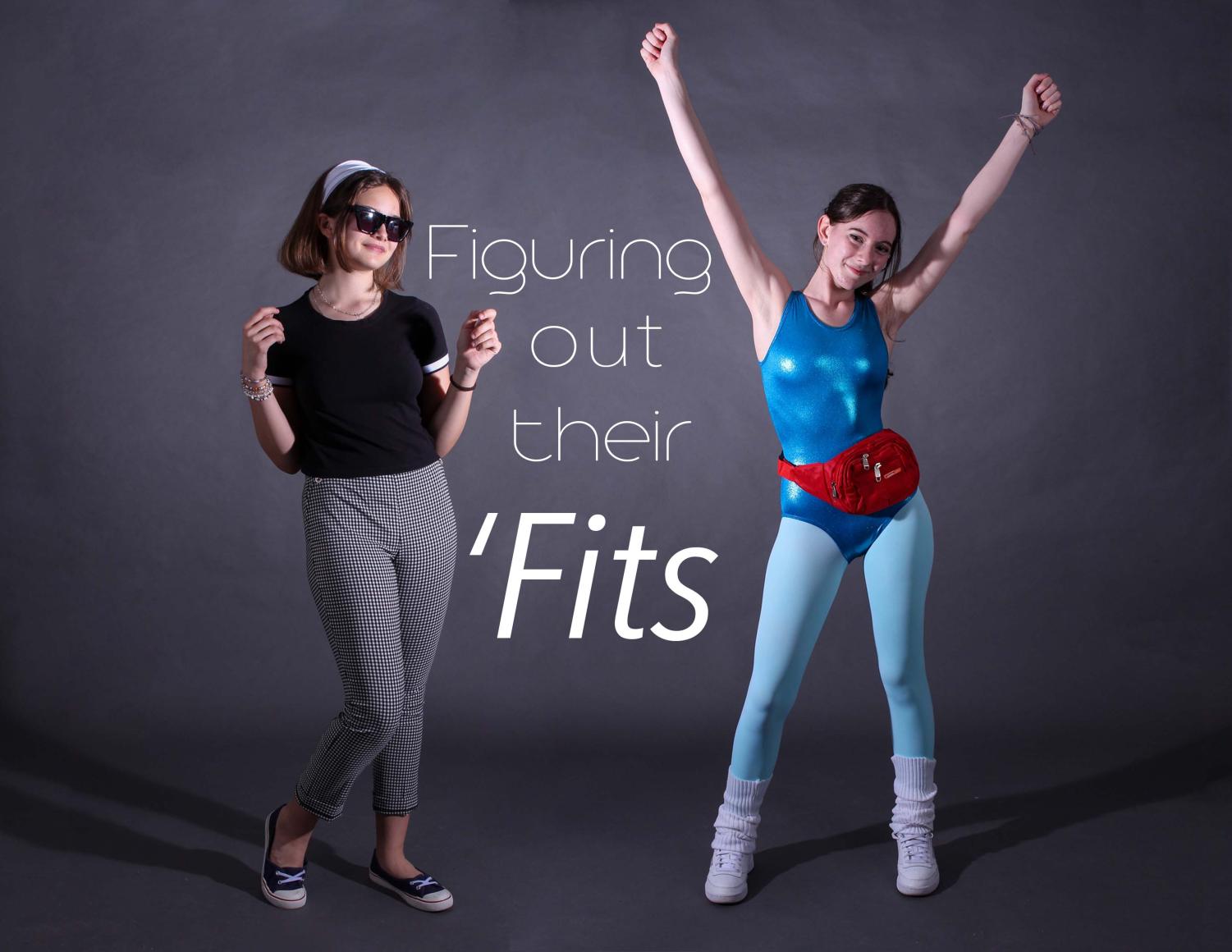 Vocal freshman Maria Clara Da Fonseca and strings senior Natalia Sanchez wear their Generations Day outfits for Spirit Week. Each day of Spirit Week gives students the opportunity to experiment with distinct styles. “I was inspired by the seniors before me,” communications sophomore Emily Singer said. “I think it’s all about finding what inspires you about the theme and then taking it to another level.” (Sofia Hennessey-Correa)

Vocal freshman Maria Clara Da Fonseca and strings senior Natalia Sanchez wear their Generations Day outfits for Spirit Week. Each day of Spirit Week gives students the opportunity to experiment with distinct styles. “I was inspired by the seniors before me,” communications sophomore Emily Singer said. “I think it’s all about finding what inspires you about the theme and then taking it to another level.”

Figuring out their ‘Fits

Next Monday, the school will undergo a transformation — a change of pace from the casual hoodies or sweatpants. Instead of their ordinary attire, students will be decked out for Spirit Week.
“I feel like I’m not one of those people who’s wearing these extravagant outfits on the daily (basis) at all,” communications sophomore Emily Singer said. “So when I make the conscious decision to come to school in a costume, I feel very fun and excited and enthusiastic about whatever’s going on. I think everybody is really into it just because you look around and there’s not a place that you look where there’s not really high energy.”

Coming from a middle school where participating in dress-up themes was deemed “weird,” vocal freshman Maria Clara Da Fonseca said she is ready to experience a “real” Spirit Week.

“Before I went to Dreyfoos, I asked a couple (of) people I know for advice or some tips,” Da Fonseca said. “And one of the first things every single one of them stated was that Dreyfoos goes all out on their spirit weeks. There’s no holding back.”

Da Fonseca has been prepping her outfits since she found out about the freshman themes a couple (of) weeks ago, foraging through her closet for pieces to wear on the Fourth of July and 1950s days. She borrowed clothes and accessories from her friends and mother that would tie her outfits together, and she only bought one new item.

“Most of my outfits (I have planned) make me feel quite powerful,” Da Fonseca said. “For the country and Fourth of July outfit I’m gonna feel a little silly in my opinion, but it’s going to look really cool. Certain outfits are going to make me feel really empowered. It’s very out of character for me.”

On the first day of Spirit Week, Da Fonseca plans to wake up earlier than usual and dress herself as a cowgirl — complete with the boots and the hat — an outfit that she would never think of wearing if it weren’t for Spirit Week. She said she hopes she won’t be the only freshman “decked out.”

“I have high expectations,” Da Fonseca said. “People say it’s super fun. It’s like the best week of the school year. I’m really excited and pumped to see if Dreyfoos can hold up to these expectations I have.”

Strings senior Natalia Sanchez remembers watching her older sister go through Spirit Week. Sanchez went into her freshman year “hyped” thinking her outfits were just as “over the top” as her sisters were, but looking back, she thinks they were “a bit weak.” She was content with her sophomore year outfits, and junior year, she picked the perfect dress to fit Valentine’s Day and curated an outfit for her favorite decade: the ‘70s. Due to COVID-19, she never got the chance to wear them out and is now determined “to try even harder senior year.”

“I remembered wishing I could go back in person just for Spirit Week so I could actually dress up,” Sanchez said. “It’s not the same because the fun of it all is being all dressed up and playing around with your friends. That’s all the hype and the spirit.”

When tackling her outfits, Natalia’s first step is to “think of an icon of that genre.” For early 2000s music, she plans to model her look after Britney Spears.

“I love her and her clothes in the 2000s,” Sanchez said. “They were a lot of Juicy Couture velour tracksuits, so I got a pink tracksuit. They also wore butterfly clips, so I got those too. So hopefully that looks enough like Britney.”

For decades day, Sanchez searched up “#80s” on Pinterest, Instagram, and TikTok to find the exact neon workout outfit that she wanted. She saw that most people wore pink and blue together, but Sanchez didn’t want to follow the trend because she said she had no interest in looking like “cotton candy” even though she enjoyed the look on other people.

“I didn’t want to just wear something just because that’s what everybody else wears,” Sanchez said.

Sanchez spent hours finding the perfect pair of blue leggings across different websites because her go-to site, Amazon, did not have any suitable shades. Even though she feels out of character in her Spirit Week outfits, she still wants to be confident and comfortable.

“I feel I am putting on a show. I’m behaving like someone else,” Sanchez said. “It changes the way I think. It gives you confidence a little bit when you’re dressed in a way that you really like, and it doesn’t look out of place because everybody’s dressed the same way. At least for me, it makes me just happier in general. It brightens the whole mood.”