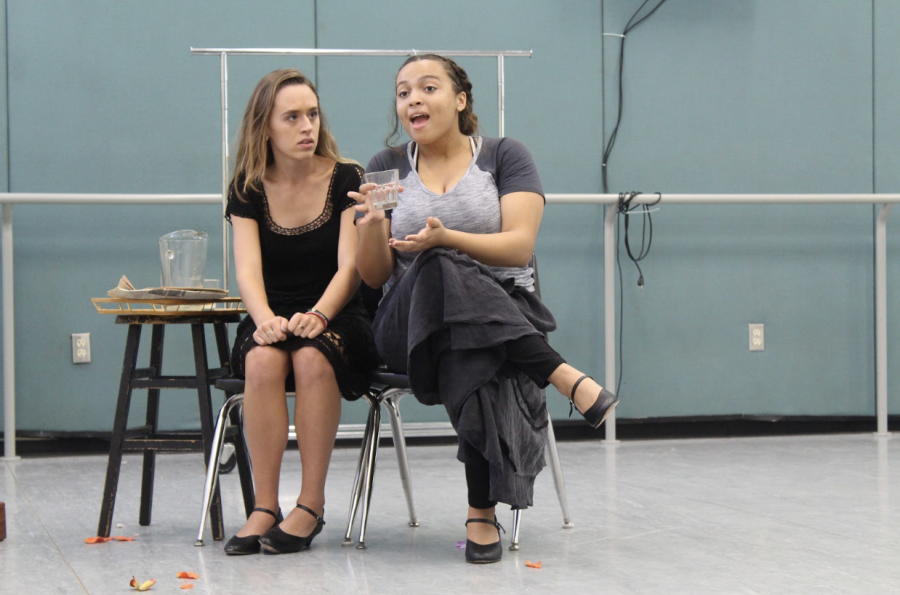 Theatre seniors Madison Burmeister and Azure Kordick begin blocking rehearsals for “All My Sons,” in one of the dance studios in Building 4.

In 2001, Dreyfoos theatre students performed “All My Sons” in Meyer Hall. Nearly 16 years later, on Nov. 10, the theatre department will once again present the treasured American classic to a new generation of Dreyfoos students.

“All My Sons,” written by Pulitzer Prize-winning dramatist Arthur Miller, first premiered on Broadway in 1947. The play reveals the story of factory owners, Joe Keller and Steve Deever, who were partners in a machine shop during World War II. The pair knowingly produced defective airplane parts, causing the death of 21 pilots. It reflects the series of events that occur as a result of their actions and investigates the effects of wartime profiteering on the American family.

“One of the most special things about this show is the ending and the meaning behind it, and just going on this huge journey with the Keller family,” theatre sophomore Maya Mays said. “I’m most excited for it all to come together and [for the audience] to see it unfold.”

Auditions for the show took place at the start of the school year. Actors had to prepare a monologue appropriate to the theme of the play, and then stay after school to perform the pieces in small groups with fellow students. “It was a very simple audition, but that makes it a little more stressful,” theatre senior Monti Cerabino said. “Because you don’t have the time to be like, ‘alright I’m gonna do these kind of things and ease in.’ It was all ‘go’ from the start.”

Rehearsals for the show shifted into full gear in September, as Hurricane Irma caused the loss of valuable production time. Despite the setback, the original premiere date of “All My Sons” did not change, but the cast and crew decided to add time to the rehearsal schedule to make up for the loss.

“Before, we were only having rehearsals until 6:30 p.m. [everyday],” Mays said. “Because of Irma, we have to add six-hour rehearsals on Saturdays, make the sets in class, and the rehearsal schedule has really added on.”

For each play, theatre teacher Bradley Barfield chooses a general theme for the actors to hone in on throughout the production process and future performances. At the end of September, rehearsals were mainly focused on dissecting the material within the play, and finding a theme within the layers of meaning in the text.

“We chose responsibility [as the theme] for ‘All My Sons,’ and that has taken a huge different meaning lately because Mr. Barfield is having a son,” theatre senior Brennah Leone said. “It brings light to the different responsibilities we all have to our country, our family, our neighborhood, and our world, and how those clash.”

Because the play takes place in the late 1940s, it can be difficult for teenage actors to truthfully embody their characters. For that reason, “All My Sons” added a dramaturg, theatre senior Sofia Carianna, to their crew. The role of a dramaturg is to become an expert on the historical background of the drama, and to help both the actors and the production members stay true to the time period in which the play is set.

“I have to know the way the American family ran back then and [understand] everything about the playwright Arthur Miller,” Carianna said. “If the actors have any questions, they can come to me, and if I see something the actors are doing that is not true to the time period, I can tell them.”

Performances of “All My Sons” will be held in the Brandt Black Box Theater. Because of this, the set will be fairly simple, allowing the actors to build and reinforce the environment through their performances.

“In Meyer Hall, your actions are going to be louder and bigger, and the sets are going to be [designed] more for a long-distance view,” Leone said. “In the Black Box, I love the more intimate setting. Actors can really find a truthful place that resonates with the audience. It’s a more interactive feel.”

The 1987 Broadway revival of “All My Sons” went onto win the Tony Award for Best Revival of a Play, and theatre students hope that the Dreyfoos revival of the play will be successful as well.

“The audience doesn’t have a script in their hands; they’re not going to see all of the subtext that we get,” theatre sophomore Jasmine Smith said. “So it’s our job, as actors, to portray that as well as we possibly can for the audience to fully grasp and understand it. A good show makes you think.”