IT’S GONNA BE HUUUUGE: WHY TRUMP DUMPING TOILET REGULATION IS A STINKY IDEA 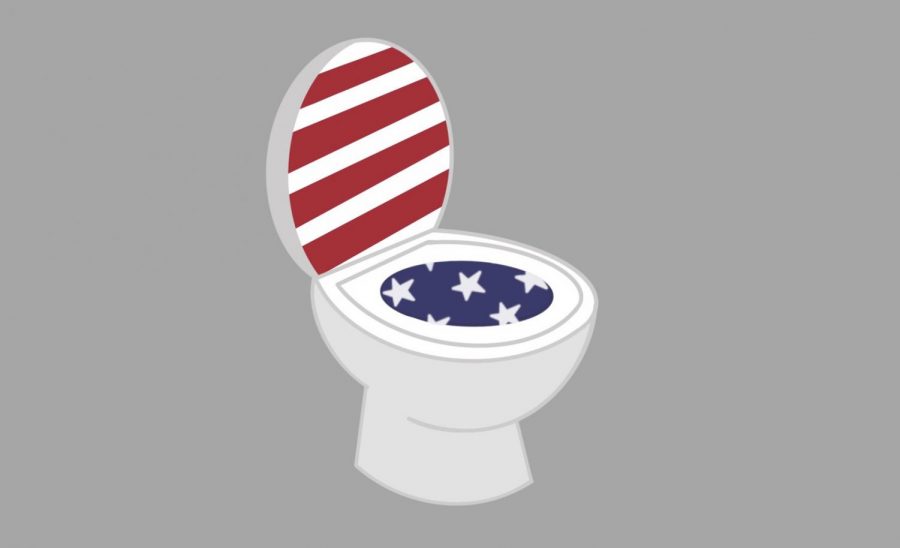 After Trump’s election, there was worry about Madman Donald pressing his big, red nuclear button. Today, it appears that Trump has already caused nuclear devastation.

“People are flushing toilets 10 times, 15 times, as opposed to once,” he said on Friday, December 6th.

For once, President Trump may be telling the truth. His frequent Big Macs could be catching up to to him.

The best part of our great president’s speech came next when he clarified, “Not me of course, not me. But you [are flushing the toilet 15 times].”

Of course, just as these words left Trump’s spongy lips, the cameras zoomed in on the man Trump was pointing at. After a five-hour drive to offer your support to a political candidate, imagine being bestowed the honor of a presidential call-out, knowing deep inside that you don’t flush the toilet 15 times, but cherishing this 1.3874 seconds of fame and knowing that you will tell your grandchildren.

But in all seriousness, if you care about the environment, you can’t just go with the flow here.

Trump’s temper tantrum is over the 1992 Energy Policy Act, which mandated that new toilets use no more than 1.6 gallons of water per flush. He also dislikes regulations on the amount of water that can come out of sinks and showers at a time.

“You can’t wash your hands practically, there’s so little water that comes out of the faucet,” Trump said.

Trump, I’m sorry, but there’s no amount of water that could clean your hands after a dump.

And at the end of the day, we just don’t want a Trump dump in our water supply. These regulations are crucial because they decrease toilet water usage by 20 percent and faucet water usage by 32 percent, according to the Environmental Protection Agency. That’s equivalent to 17 gallons of water a day per household. This saves the average American household $380 in water bills a year.

On a state-level, saving water is crucial. A 2014 Government Accountability Office study found that 40 out of 50 state water managers feared water shortages in their state during the next decade. With an increasing population and decreasing water supplies because of pollution, this is a real crisis.

So here’s my constipation proclamation. Don’t let Trump flush down our future. Without ample water, we can’t survive. Take action. Use the hashtags #toiletgate or #toilettrump on social media.