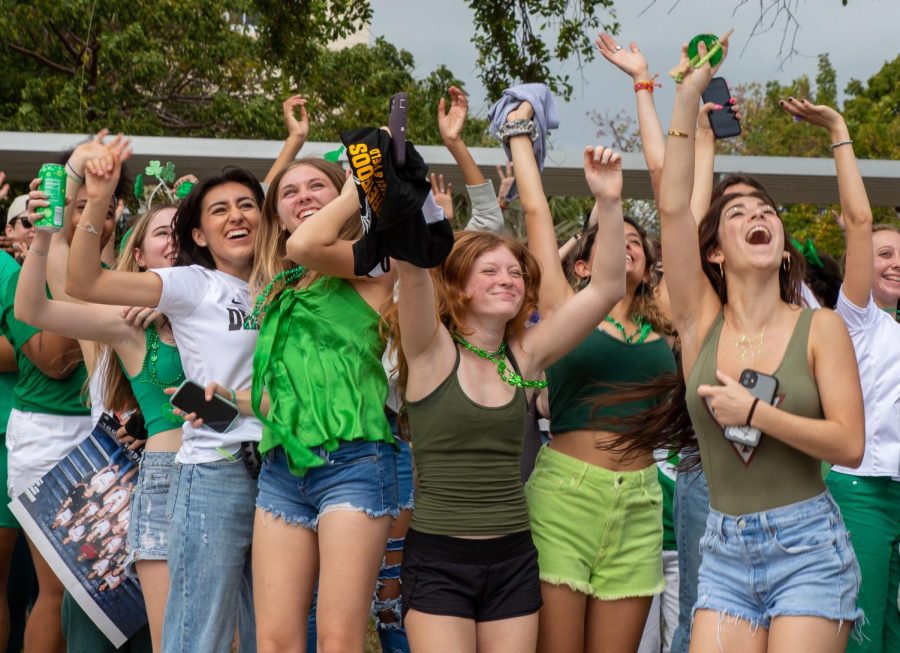 Sophomores, decked out in green gear for their St. Patrick’s day theme, jump, scream, and wave as the drone flies above the front of campus. Caption written by Olivia Metzler.

Field Day ended in a flurry of students scrambling to escape the rain and discussing the day’s games. However, before the rain, events started at 9:15 a.m. when Principal Blake Bennett announced dismissal for the Lip Dub.

The first Lip Dub, a one-shot video featuring students lip-synching to various songs around campus, was filmed in 2019. The following rendition, filmed in 2020, gained nearly 500,000 views on YouTube.

Filming began with the Black-Eyed Peas’ “Pump It” echoing across the soccer field, with the cheerleading team lip synching along.

“Our theme (for the Lip Dub) is ‘Bringing Back the Hype,” Murray said. “We want to incorporate a lot of trendy stuff to engage everyone. Every single song is known by everyone. They are generational classics.”

The “classics” included “DJ Got Us Fallin’ In Love” by Usher, which vocal junior Sophia Burnston and fellow Jewish Student Union (JSU) members lip synched to.

“JSU is important to me because it is where I get to celebrate my Jewish heritage on campus,” Burnston said. “Being able to represent that and what our club stands for in the Lip Dub is super exciting.”

The Lip Dub gave clubs, major departments, and student organizations a platform to share their values and spirit, even if they did it briefly and while lip synching to Usher.

Burnston was also involved in the Lip Dub her freshman year.

“I was just amazed by all of this,” Burnston said. “This seemed like such a convoluted, complex process that I would never understand. Flash forward two years, and I’m part of that process.”

“You see me for a split second,” Alvarado said of the 2020 Lip Dub. “This time, I’m with a more deeply-rooted club, and I’m more excited to be here now that I’m older and I know all of the procedures.”

When reflecting on the importance of the Lip Dub, visual sophomore Nikolai Dutkewych explained that it is the unity the video creates that makes it so popular.

“It’s a way for people to unite and experience all the majors and clubs combined in one single unit. It’s about togetherness,” Dutkewych said.

This “togetherness” was captured in the drone shot outside Building 2, the final scene of the Lip Dub. The video’s finale is planned to feature the entire school. To film it, students stood with their grade levels and waved to the hovering drone, cheering as it cruised above them.

After students returned to their third period class to grab their belongings, the Field Day games began. And so did the rain. It started as a light shower as sophomores took the first win during Hoop Chain, an event which required students to pass a hula hoop from one end of their line to another while keeping their hands connected.

“One person was basically holding the hoop, and we all ran through it,” digital sophomore and Hoop Chain player Ashley Weiler said. “I feel like we used a very clever strategy, and we didn’t cheat at all.”

After coming in last place for Hoop Chain, juniors achieved a two-game winning streak, succeeding in both the Relay Race and Red Light, Green Light.

Vocal junior Mitchell Thai contributed to the victory in the Relay Race by participating in the three-legged race, which he thought “would be really fun.”

“I first decided to sign up because I enjoy participating in these types of activities during Spirit Week, and it’s always so fun showing school spirit and getting competitive against the other grades,” Thai said.

This competition bubbled to the surface in Tug Of War, where seniors faced off with sophomores and juniors with freshmen. After defeating the underclassmen, the juniors and seniors each took an end of

the rope and waited for the call to go. After a battle that wavered back and forth between senior and junior control, the juniors ultimately emerged victorious.

While juniors are currently in last place overall, their performance at the games today will earn them points toward their overall Spirit Week score. Thai attributes his enthusiasm to revitalized school spirit after a hybrid year.

“I think the energy with this Spirit Week feels way more intense and fun than previous ones after coming off of our virtual one last year,” Thai said.

By the end of lunch, students raced to gather their belongings and take cover from a downpour. Huddled under the cafeteria overhang, they listened to The Collective play songs until the lunch bell rang.