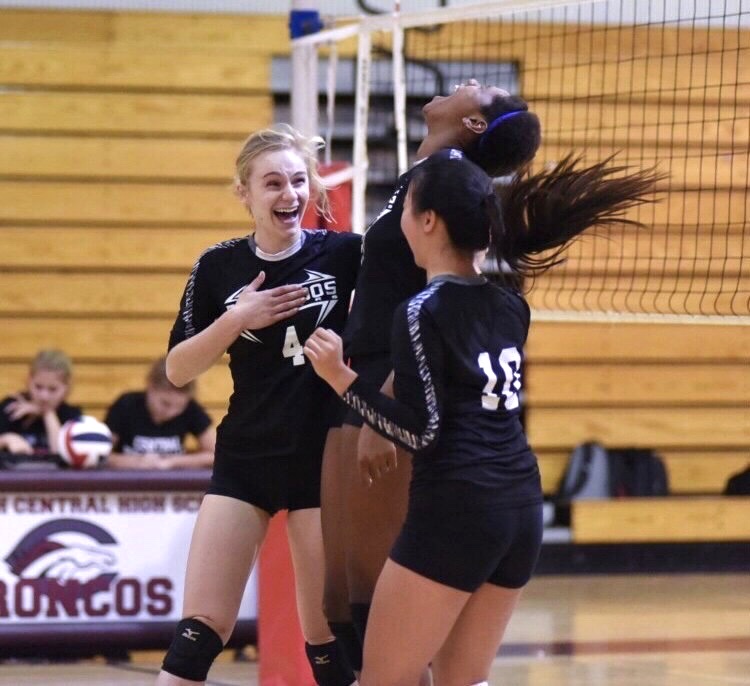 After a point by outside hitter and visual senior Julia Gonello, band senior Autumn Wong and graduate Czhen Beneby celebrate together in a game against Palm Beach Central during the 2020 volleyball season. Photo courtesy of Autumn Wong.

Strings senior Gerrit Felton started his track career on a dare. In middle school, Felton’s friends dared him not only to join the track team, but race the so-called “fastest kid” in school. Felton, as he said, “smoked” him, and after the race, he thought to himself, “I think I belong here.”

In high school, Felton continued his track career for all four years and steadily racked up wins in events such as the 400-meter and 100-meter dash.

“I trained outside of school; I learned proper race technique […] to become a really good sprinter,” Felton said. “Throughout the years I’ve seen my times decrease exponentially in all the races I did.”

Felton won his first track race in his sophomore year when he competed in the 400-meter dash and qualified for the regional competition. Felton attributes his later success in the sport to this first victory.

“After I won my first race I was like, ‘Wow, I’m really getting somewhere,’” Felton said. “It boosted my confidence and led me to train harder [and] become faster.”

In his junior year, Felton had been doing well competitively when the pandemic hit. Felton was improving on his success from the years prior, working to beat his times in order to get to the state competition. Just as he was getting on track to qualify, the track season was cut short due to Covid.

“I was winning races consistently,” Felton said. “It stunk because not only was I winning, my times were improving. I was training harder than ever because I was like, ‘I have a real shot to actually qualify for states.’”

As the pandemic persisted into Felton’s senior year — which Felton describes as a “plain disaster” — the track team was not able to meet until the district competition. At the competition, Felton, ready to start fresh, pulled his hamstring.

“I wasn’t able to place … [or] qualify,” Felton said.“I knew I was capable of beating every kid at that meet.”

Despite some of the competitions not going the way he had hoped, he still values the experience of being with his teammates and competing.

“I love competitions,” Felton said. “ I love to compete against other schools, meet new people, make new friends, and then the team dinners afterwards are always fun […] I’ve made a bunch of friends by competing [and met] cool kids that I’ve had the opportunity to race and learn [of] their experiences.”

After a point by outside hitter and visual senior Julia Gonello, band senior Autumn Wong and graduate Czhen Beneby celebrate together in a game against Palm Beach Central during the 2020 volleyball season. Photo courtesy of Autumn Wong.
Visual senior Julia Gonnello has experience being the underdog — she likes it too. She and the rest of the girls’ volleyball team were able to win the district championship in her junior year after being down five points in the tie-breaker set of the match. She attributes the success to the mindset of her team.

“Everyone’s there for a good time.” Gonnello said. “We’re not some big hotshots; we’re not winning states every year. We just worked our butts off and put our heads into the ground. We never gave up.”

Julia’s volleyball career began long before high school. She started playing recreational volleyball when she was nine through the Jupiter Tequesta Athletic Association. She dabbled in both beach and court volleyball before beginning to play competitively when she was 12.

“Beach volleyball is more fun,” Gonnello said. “I’m a ball hog […] I like to touch the ball, be actively involved in every point. I’m loud, I’m all over the place. With beach [volleyball], there’s only two people, so you’re touching the ball [at] every point.”

Gonello joined the school team her sophomore year and now serves as co-captain with band senior Autumn Wong. Now, she enjoys acting as a mentor to the younger girls.

“I have so many fun memories with those girls,” Gonnello said. “I’ve enjoyed training [them], showing them how to hit. You get a lot of girls who’ve never played before and you get to show them the mechanics and the techniques and get excited when ‘Mackenzie’ makes her first block.”

Making an underdog comeback in her junior year at the district championship was a special moment for Gonnello. Coming from a school that is not known for their sports and obtaining a victory like that meant a lot to the team.

“Winning districts was the highlight of my volleyball career,” Gonnello said. “There was a lot of skill, but there was also a lot of connection on the court that I think is really hard to find. We were very fortunate to have that.”

Though it is a bittersweet experience leaving a closely-knit team for Gonnello, she believes in their ability to stay connected even after she’s gone.

“I’m going to miss all the girls,” Gonnello said. “We keep our little group chats. We still have our group chat from 2019, so we’re gonna keep [it] and keep everyone updated. It’s definitely sentimental, but it was a good way to go. We ended well.” 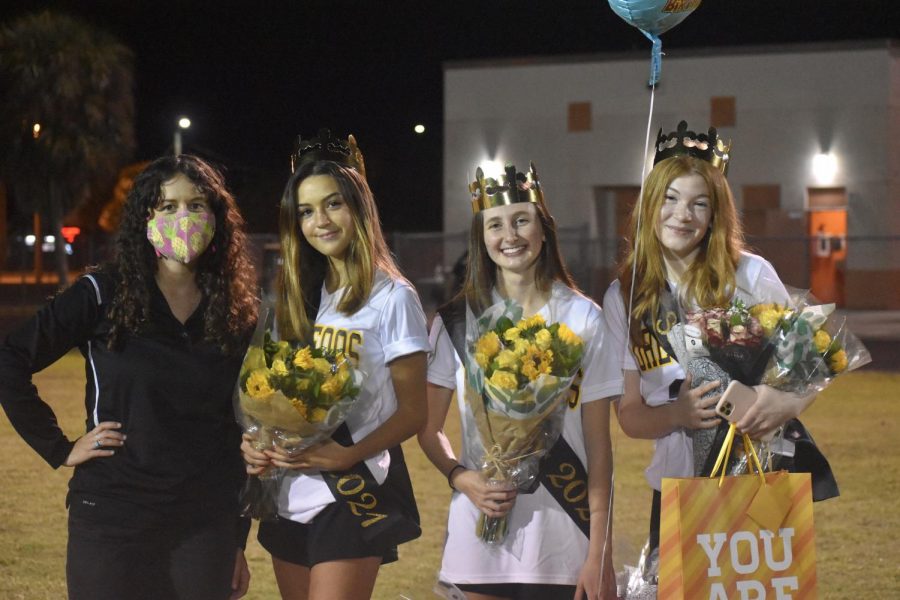 Seniors on the girls soccer team gather together in a photo to celebrate their senior night. Standing next to soccer coach Ms. Sarah Garcia, visual senior Natalia Sanchez and digital seniors Samantha Lorelli and Katelyn Carter are presented with flowers, crowns, and bouquets during halftime. Photo by Isabella Johnson.
To digital senior Sam Lorelli, soccer was just another club. As a sophomore, she was not in any clubs and felt like she needed to get involved. She had played a bit of recreational soccer, so she decided to try out for the team.

“As a freshman I was kind of scared,” said Lorelli. “I was like ‘you know what, they probably have enough people.’ Then [in sophomore year]… I was like ‘whatever, I’ll give it a shot,’ [and] it was actually so fun.”

When Lorelli was a sophomore, she was hesitant on the field. Through the help of her coach and teammates, she has learned to branch out, such as being put on the offensive line as a typically defensive player.

“Until I knew everybody, I [wasn’t] actually comfortable with going on the field,” Lorelli said. “My sophomore year, we had 11 seniors and it was super intimidating. Coach Garcia really pushed me to try new things.”

As she has gotten more comfortable with the team, she has made fond memories with her teammates and through the sport in general.

“I love [that] we did little parties all the time,” Lorelli said. “We would just make up excuses like ‘Hey, let’s have a party for Christmas because we can.’ I [also] enjoy driving to games with everybody.”

During the pandemic, the team still played while wearing masks and getting regular temperature checks. Though hybrid learning did cause some isolation, Lorelli made an effort to make connections with new members of the team that were in-person.

“It was hard to make friends with the freshmen,” Lorelli said. “But when they came to school and since there was a [small] amount of people at school, I got to become really close with them. I sat with a few of them at lunch.”

Now captain of the team, Lorelli’s perspective has changed. She felt she had a certain responsibility as captain that was not present when she was just a player.

“Team literally stands for ‘Together Everyone Achieves More,’” Lorelli said. “Once in a while I did have to remind everybody of that, and just be the positive influence that they needed. That’s something I didn’t have to do as just a player.”

Lorelli encourages kids to not hesitate to join teams or clubs they are interested in. She thinks that the school environment is one of inclusion, where everyone is welcome.

“Just do it,” Lorelli said. “There’s nothing holding you back. Dreyfoos kids aren’t scary. You just have to go for it.”