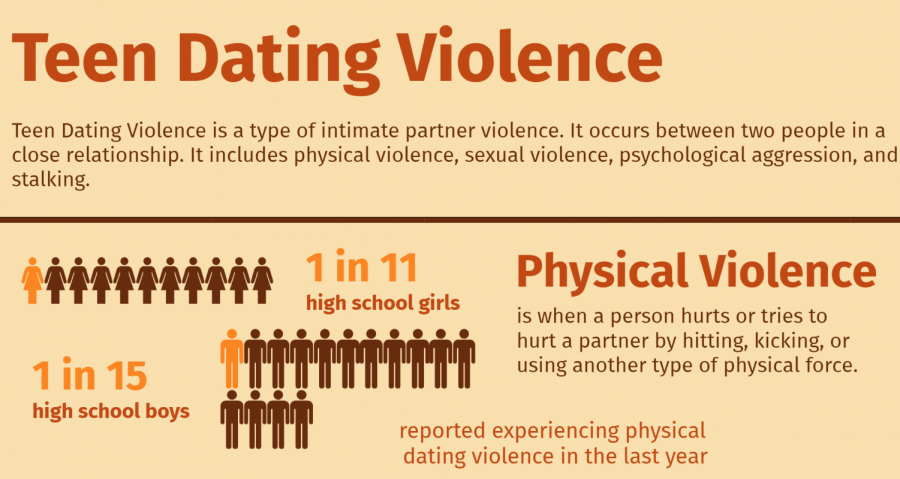 Every year, approximately 1.5 million high school students in the United States report being physically harmed by a romantic partner, with one in three girls experiencing “physical, emotional, or verbal abuse from a dating partner.” February is National Teen Dating Violence Awareness and Prevention Month, and, therefore, an opportunity to discuss this issue in our community.

Dating violence occurs when a current or former partner employs controlling and manipulative tactics in order to assert power. The CDC recognizes four types of behavior associated with dating violence: physical violence, sexual violence, psychological aggression, and stalking. Not all behaviors must be present for a relationship to be considered violent or unhealthy.

Teens may be accustomed to overlooking red-flags that signify the development of violent and abusive traits in their partner, such as teasing or name-calling, due to social norms.

“I think that people don’t always know they are in an abusive relationship, or they think they can change [their partner],” Rebecca Mroczkowski, the school’s Behavioral Health Professional, said. “I think they may not realize that even the threat to carry out violence is abuse. They [justify it] when their partners say things like ‘they really don’t mean it’.”

Teens may also lack life experience that allows them to easily identify characteristics of dating violence. Additionally, many attend the same schools and participate in the same extracurricular activities as their abusers, making it more difficult for teens to distance themselves from or comfortably report their abusers.

There are both short and long-term consequences of these relationships. Teen victims of dating violence can often experience symptoms of depression and anxiety, exhibit antisocial tendencies, engage with unhealthy substances, and contemplate suicide. These behaviors can translate into alcoholism, eating disorders, and further encounters with domestic violence in adulthood if not properly managed. As explained by the CDC, “violence in an adolescent relationship sets the stage for problems in future relationships, including intimate partner violence, sexual perpetration and/or victimization throughout life.”

Many cases of teen dating violence go unreported for numerous reasons. For one, the issue may go unacknowledged. Some fail to recognize verbal abuse or sexual intimidation as dating violence, despite its potential to be as psychologically damaging as physical violence. Teens may also be reluctant to report their experiences out of fear of the way others will perceive them.

“There is a stigma against victims in general in this country, and against victims of abuse particularly,” Brittany Rigdon, a former case manager at a local domestic violence shelter and a current teacher at Dreyfoos, said. “Victim blaming is a real thing. [People wonder] ‘what did you do,’ ‘why didn’t you leave,’ ‘didn’t you know better’ and things like that. I definitely believe that the stigma keeps people in relationships that they know are toxic for them, among other reasons.”

Prevention of teen dating violence can start on a local level. Creating an open dialogue in classrooms, households, and friend groups is essential to eliminating the stigma around dating violence, the shame victims may experience, and the normalcy of abusive behavior. Currently. fewer than one in three teens in abusive relationships confide in their parents about their situation, with only 26% of sons and 34% of daughters saying they have had a conversation about dating abuse with a parent in the past year. This comes in spite of psychologists finding that communication about teen dating violence is a key factor in preventing it.

Education about the subject is also crucial. Recognizing signs and characteristics of dating violence is the first step to leaving unhealthy relationships. Other prevention techniques include practicing bystander intervention, as well as challenging gender norms and the behaviors associated with them.

“If I were to speak to younger people in abusive relationships, I would say get out as soon as you can. Your life is not intertwined with this person and your life should never be intertwined with them,” Rigdon explained. “Yes it’s hard, yes there is stigma, but […] you have so much life to live, you have so many opportunities.”

If you are experiencing or witnessing teen dating violence, reach out. The National Teen Dating Abuse Hotline (1-866-331-9474) is available 24/7 to provide confidential support to victims. Palm Beach County Victim Services are also located at different locations across the county. Additional resources may be found here.

“As always, I will say please talk to a trusted adult,” Mroczkowski said. “It could be any adult you trust! It could be me, a counselor, a teacher, a school police officer, a friend’s parent. Same would apply if you are a friend to someone who you think may be in an abusive relationship. You can call 211 any time, day or night. If it is a real emergency, call 911.”