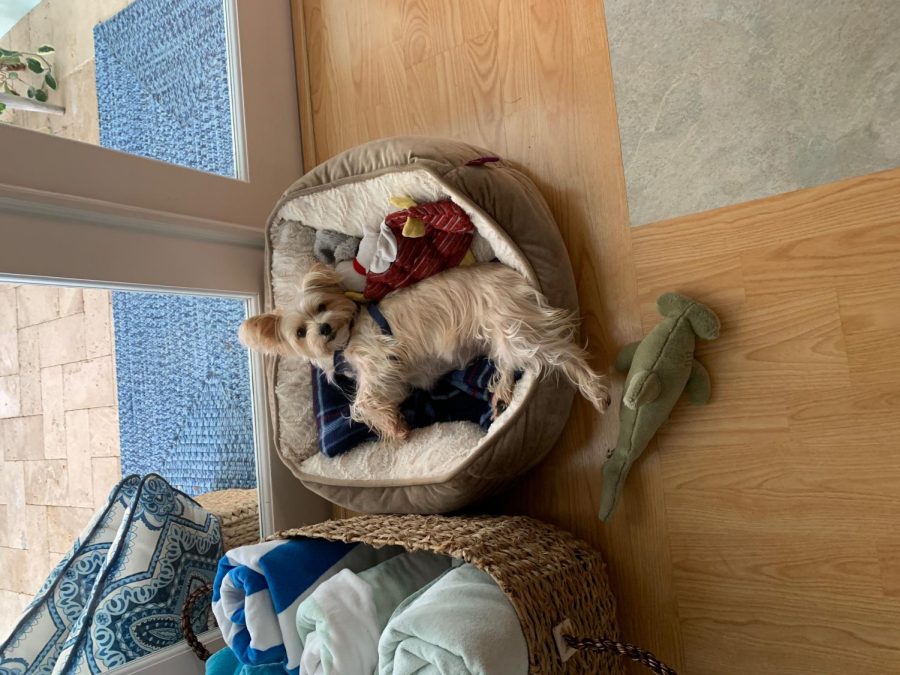 While practicing social distancing, it’s not easy to stay entertained in the house. When they’re not hosting Google Meet sessions, grading virtual assignments, or posting on Google Classroom, some teachers are keeping busy with companions off the screen: their pets! The Muse spoke to communications dean Angela Anyzeski and social studies teachers Kathleen O’Hara, Brett Burkey, and Wendy Zietz about how their dogs and cats are fitting into their quarantine routines.

What kind of pets do you have and what are their names?

“I have one big mutt, and I have two tabby cats that are brother and sister. Barkley is the dog—I let some students name him. The boy cat is named Gary because my fiancé wanted to have a human name—he thinks it’s funny. And then the little girl cat is—well, I wanted her to be named Chairman Meow, but it’s a girl, so it’s Chair-cat Meow. Nobody gets it, so I just call her ‘Mao-y.’”

“Gary is basically a dog. He comes when he’s called. He does tricks. But Mao … if I had a friend to visit over, they wouldn’t see her unless they were in the house for over 10 hours. If there’s somebody in the house, she doesn’t come out. She’s the opposite of [Gary] … Barkley is 70 pounds, [and] he’s really obnoxious. He’s in everybody’s face all the time … If you’re sitting on the couch, he’s going to be sitting on you. He’s a big dog, so it’s not exactly comfortable … It’s funny because he and the little girl cat Mao-y are best friends. When he’s asleep, she’ll creep up and [lie] on him. She’s terrified of everything, except for this big ass dog … [Barkley is] a rescue. Back in 2011, there were a bunch of tornadoes that went through Tuscaloosa, Alabama. Ten weeks later, they had an explosion of puppies. So, there was this rescue company [Paws and Pilots] that picks them up around the country and then flies them down here because Palm Beach County is like a high adoption area … They fly them in from all over the country … He was a tornado puppy.”

How are your pets keeping you entertained right now?

“I don’t do well without human interaction. Barkley forces me to go out and go for walks… so that’s good because, otherwise, I would probably be getting fewer than a thousand steps a day. And working from home, Mao is out a lot now. She doesn’t like when I would go to work every day, [and] it’s like she would punish us for leaving her, so she wouldn’t come out. She was withholding her affection. But now that I’m home all the time, she comes out and hangs out with us. So I’ve really gotten to see how much she and Barkley love each other … If you tap something, [Gary will] jump up to it … When [Chris and I were] working out in the backyard we had a punching bag attached to our mango tree, and we would be hitting the punching bag and Gary would be on the branch above it just meowing at us like ‘C’mon, you can do better than that.’ He’s like our boxing coach.”

What kinds of pets do you have and what are their names?

“I have two dogs. I have a 12–year-old cocker spaniel named Lexi, and then I have a 6-month-old golden retriever. That’s the one all the kids know, Tom—he’s the one that goes on Instagram.”

“Lexi is moody and entitled and spoiled. And we laugh, like her love language is growling at us. And then Tom is everything a privileged South Florida kid could be: gifted, he has a private trainer that comes once a week to the house, and we talk about him being accelerated. I don’t know if he needs a modeling agent or a sports agent for his skills with the ball and the frisbee. Should he be, like, being scouted by the Ivy Leagues because he’s just so smart?”

What are your favorite things about your pets?

“Their anthropomorphic qualities. I would tell the kids in class, ‘giving human-like qualities to non-humans.’ Well, one, my pets have human names, Lexi and Tom, and they give me every answer that I want to hear from them. They’re never…  bratty. They’re never independent like teenagers are.”

What kind of pet do you have, what is their name, and how do they usually behave?

“Sammy is a border terrier. We’ve had him for 11 years. He has the greatest temperament: Nothing bothers him. He’s great with people of all ages.”

How is your pet keeping you entertained right now, and what is your favorite thing about him?

“He allows me to take pictures of him—sometimes in costume—for entertaining and motivational purposes. My favorite thing about him is how he sleeps on his back with his legs in the air.”

What is your favorite memory with Sammy?

“Sammy is one of the family [members]. He’s on the couch with us, sleeps with us, travels with us—we’re inseparable.”

What kind of pet do you have, what is their name, and for how long have you had them?

“Her name is Sandy and she is a blonde yorkshire terrier. [We have had Sandy for] seven years.”

“Well, now [what she does] is different than what she used to do. I mean, when we were gone she would sleep most of the day, obviously, but now she tends to follow us around a lot. She’s much more clingy. I think it kind of disrupted her normal habits just like it’s disrupted ours … I find that she’s much more willing to sit by us for long periods of time … She definitely relocates to where we are.”

How is Sandy keeping you entertained right now?

“I think she gives me a sense of purpose because not only am I doing things I wouldn’t normally do a lot—I’m cooking a lot, and you know I don’t cook—but I’m also much more attentive to her schedule and her needs … I think I appreciate the time with her more and I think she’s adorable.”

What is your favorite thing about Sandy?

“She’s very much a creature of habit. It’s guaranteed. In the morning, it’s always the same … When I start to wake up, I’ll reach down to pet her, and she automatically flips onto her back because she wants her belly rubbed. And then, when I get up to make the coffee, she goes and lies on my husband—not just next to him, on top of him. When I make the coffee, we always put a dollop of whipped cream on it and then we let her lick the whipped cream off, which I know some people would be grossed out about, but I don’t care… So, like I said, she’s very much a creature of habit and I appreciate that because it makes the morning routine really nice, and it’s just kind of our bonding time. Just every day, it’s nice to have her around and know that she’s so happy that [we’re] here.”