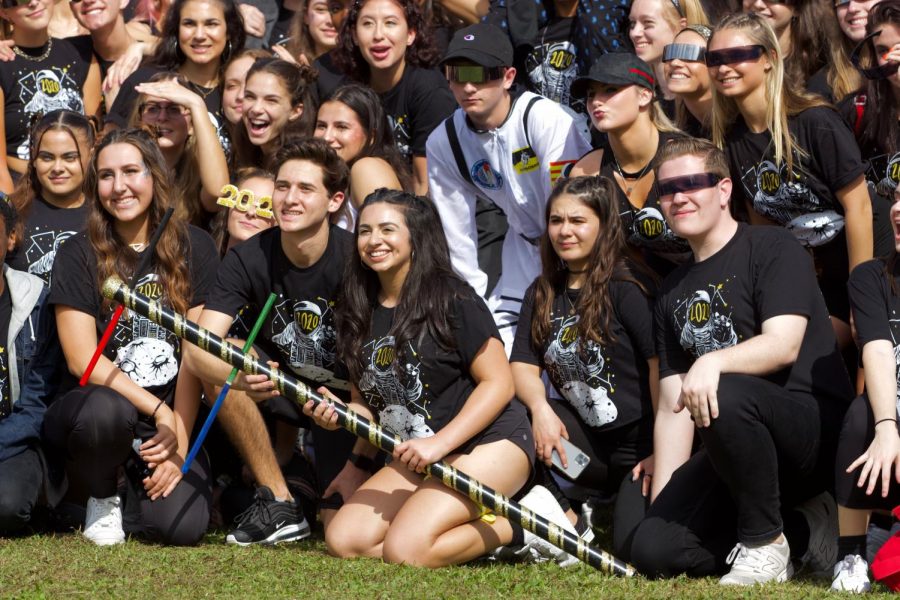 Senior Class Council president Nikolas Zimmerman holds the spirit totem pole with his co-president Mara Vaknin as the entire class celebrates their victory for spirit week. "I was honestly just happy because I love seeing the class so happy," Zimmerman said. The class just worked so much better together this year and I love that we were awarded for the hard work and time that we put into the job."

The stereotypical high school in America gets excited about their football squads, homecoming game, cheerleaders, and adolescent cliques. At Dreyfoos, none of that truly exists. There are glaring differences between Dreyfoos and other high schools that are deemed “normal.” At Dreyfoos, the longest-awaited time of the year is Spirit Week, and the cherry on top is the pep rally on Friday.

“The pep rally really showed our school spirit and … why we’re Dreyfoos and why we’re different from everybody else,” theatre Freshman Seamus Cole said. “It just goes to show that Dreyfoos students are really accepting of the differences between their school and normal high schools.”

This year’s pep rally kicked off with some results in the banner decoration competition. All four class councils had created their own decoration for their class’s area in the gym and it was finally time to see what the hard work had led to. In fourth place were the freshmen, In third place the Juniors, in second were the sophomores, and in first were the seniors.

“What really separated the winners of the competition were the usage of design elements, and the decorations that were specific to each grade, like the juniors using fake fire and the seniors having planets hanging from the ceiling,” Freshman Class council president and communications major Jayanth Kantemneni said.

At the start of the pep rally, each class presented a skitbased on the theme for their class. The seniors’ theme was outer space, the juniors were Firefighters, the sophomores’ theme was Shrek, and the Freshmen used Monsters Inc. The freshmen and seniors both brought in teachers for their skits, whereas the sophomores and juniors used students only. In fourth place were the freshmen, in third place the Juniors, in second the sophomores, and in first were the seniors.

“I think we did great in our skit and we worked really hard with the time that we got,” dance junior Alexander Thomas said. “And you know, sometimes we had our ups and downs with choreography and people showing up, but we did what we did, and overall I’m really proud of everyone because we still worked really hard.”

The madness didn’t stop there, as following the skit competition was a karaoke battle between the four classes. Each class started off with their own simple melodies, but soon transitioned into faster-paced and fun music that had the entire crowd jumping for joy. In fourth place were the freshmen, in third place the sophomores, in second the juniors, and in first were the seniors.

“I think we did really well because [the results] completely exceeded our expectations,” vocal senior Noah Sams said. I totally wasn’t expecting us to win, so when we did, I felt really good.”

Taking a step away from the arts-based competitions, the four classes proceeded to compete in a flurry of different games. These games included Pantyhose Bowling, in which communications senior Anamaria Navarrete came out on top for her class, Musical Chairs in which dance junior Emma Mccue was the last one sitting, a basketball free-throw challenge in which visual junior Camar O’neal sank sixteen free throws for the win, and a game of Hungry Hungry hippos just for fun between each class council’s presidents.

“It felt great, because the moment I made one free throw and then another one, I could hear the entire crowd behind me erupt,” piano sophomore Chris Samuel said. “We didn’t win, but having the entire class hype me up was pretty cool.”

After all of the initial competitions, it was time for the most anticipated part in all of spirit week—the class dances. Each class had spent loads of time rehearsing and practicing their moves, and now they could finally show them off. In fourth place were the freshmen, in third place the juniors, in second the sophomores, and in first the seniors.

“We were super stressed this week because we heard that the other dances were really good, but we pulled through and I think we did amazing,” dance sophomore Emma Jaffe said. “We started in September doing the first few dances, and then we really just pulled it together this week with all of the formations and the different changes. We really just left it all out there for our class.”

Finally, as the pep rally came to a close, it was time to announce the results for the winners of spirit week. Each class council had worked diligently to put on the best show for their classes, culminating in this moment. When the SGA presidents digital media senior Kristina Ronan and communications senior Sebastian Fernandez rushed to the center of the gym to announce the results, the crowd was silent. When Ronan announced that the seniors won, the entire class was ecstatic.

“Starting in sophomore year and junior year, and seeing the class work[ing] so hard and putting in more and more effort each year, it was really rewarding,” Senior Class President and communications major Nikolas Zimmerman said. “I was honestly just so happy that all the hard work we put in got the recognition it deserved.”

Despite that being the end of the pep rally, the day wasn’t over just yet. The Black Student Union, in a joint program with the Latin and Asian heritage clubs, put on a show for the entire school. It educated students while also showcasing the strides that Americans of color have made in so many different areas. Throughout the show were not only speeches, but also vocal and dance performances from students.

“I was doing a monologue about Africa and african civilizations,” communications freshman James McIntyre said. “I was so inspired to give it, because if it could inspire any little black kid from anywhere that they could do anything and all things, that’d be awesome.”