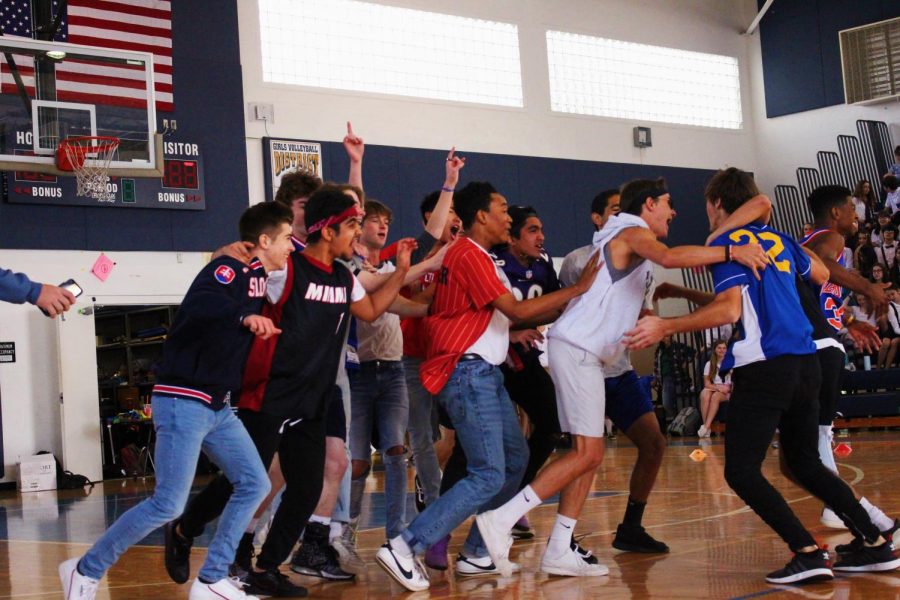 Juniors celebrate their dodgeball victory over the seniors. With first place in the game, juniors brought their total number of Spirit Week points to 40, tying with the seniors for the most points. “I think we won because we all had great teamwork,” theatre junior Christopher Hesse said. “We all were really dedicated to the cause, and we know that this is going to be the year that the juniors beat the seniors, and so we were all so devout to that one cause that we just went bananas.”

If an average American had visited the Dreyfoos campus on Jan. 30, they may have suspected themselves to be on the set of a cheesy high school coming-of-age film with an imaginative costuming department but barely-developed characters.

That’s because, on the fourth day of Spirit Week, students arrived to school as the manifestations of quintessential high school stereotypes. Freshmen, donning glasses and suspenders, dressed as nerds, while sophomores in ties and skirts did their best to look preppy. Juniors became jocks and cheerleaders, and seniors pulled off goth looks that screamed, “It’s not a phase, mom!” To an outside observer, their fashion choices might have appeared bizarre, but to Dreyfoos students, it was all a normal part of Class Clique Day.

“I think Dreyfoos is unique in that we all have this eagerness to be expressive, and a certain vulnerability that allows us to go all-out rather than to only go halfway at the risk of being judged,” vocal junior Amanda Ferber said. “That’s why Spirit Week is so successful and so lively.”

During lunch, students flocked to the gym’s blue bleachers to watch their classmates go to war in a game of dodgeball. After explaining the rules of the game, communications senior and SGA co-president Kristina Ronan counted down to the first round, which pitted the seniors against the sophomores.

To the sound of Britney Spears’s “Toxic,” the seniors and sophomores dashed to grab the balls lined up at the center of the gym floor. Despite the sophomores’ efforts, the seniors emerged victorious.

As the sophomores and seniors shuffled back toward the bleachers, the juniors and freshmen faced off in a second game. Communications junior Lucy Steigenga yelled, “Juniors, where are my cheerleaders at?”, to which a cluster of cheerleaders waving red and white pom-poms responded with an eruption of shouting and applause.

As the end of the match grew near, only communications freshman Corey Goldstick remained standing for his team. Although the freshmen in the audience built up an impressive chant of “Corey! Corey!”, Goldstick was taken down by one of communications junior Kyle Murphy’s fastballs.

“[When I heard the freshmen chanting], I thought that I had to do my best to try and win for them, but it was really cool to hear it, and it made me super happy,” Goldstick said. “If I could have a rematch with the juniors, I would probably drop all the balls and try to focus on catching more to get the rest of my team back in.”

Before competing for the title of dodgeball champions in the final round of the day, the juniors and seniors huddled together and murmured words of inspiration to their respective team members. Seniors maintained a slight lead for the first half of the game. At one point, a blue ball whizzed past the team of juniors into the bleachers where the rest of their classmates were sitting. By the time the ball was returned to the players, the juniors were winning, picking off seniors until only one was left.

“I looked at [the seniors], and they just looked like a whole bunch of chumps waiting to get hit by that shiny red ball,” theatre junior Christopher Hesse said.

In a scene mirroring that of the previous game, theatre senior Nicholas Madruga’s classmates cheered him on with chants of “Nick! Nick! Nick!” But, Madruga wasn’t concentrated on them.

“In the moment, you don’t really think about anything else,” Madruga said. “You just see what’s in front of you, and you don’t see what’s on the side of you; you just focus on the game.”

After a few tense minutes of dodging the colorful balls that contrasted so starkly with his black, goth attire, Madruga was out. The jocks and cheerleaders took advantage of their athletic stereotype and won the tournament, bringing the juniors’ total class points to 40 and tying them with the seniors. Sophomores ended the day with 33 points, with freshmen totaling 20 points.

“I think we won because we all had great teamwork,” Hesse said. “We all were really dedicated to the cause, and we know that this is going to be the year that the juniors beat the seniors, and so we were all so devout to that one cause that we just went bananas.”

In preparation for the pep rally tomorrow, an event that media specialist and SGA sponsor Sarah Garcia called “the rest of Spirit Week times five,” SGA and class council members stayed at the school past 10 p.m. to set up decorations, ensure that music played without issues, and rehearse some of the performances.

“I think Spirit Week is a time for the whole school to come together,” Ms. Garcia said. “I feel like we’re kind of polarized in our own majors, and this is an activity that everyone can participate in, and they can meet people from different majors. It kind of brings out different creativity in students, and we just come together as a whole community.”