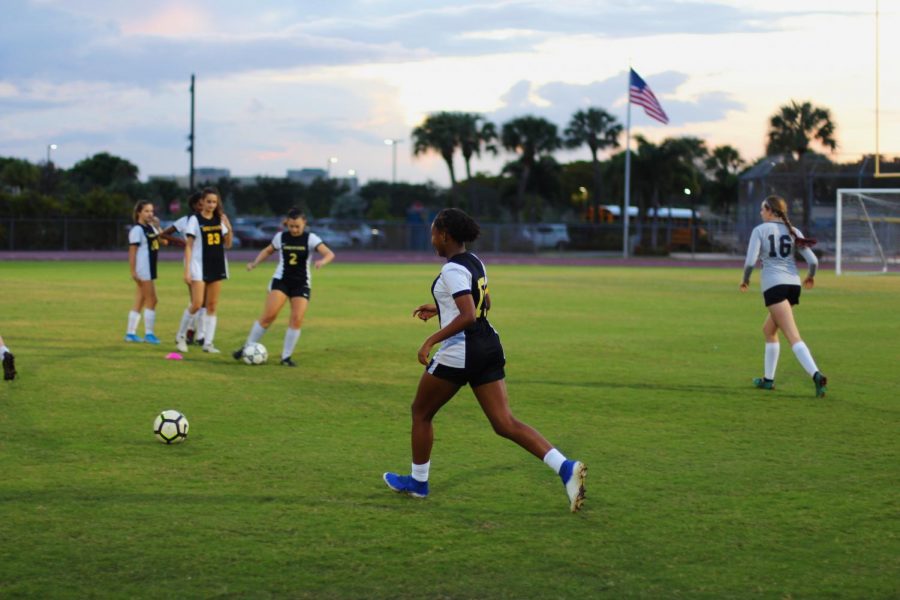 Band freshman Ava DeGaetano receives the ball from a teammate in preparation for their game. They focused on pass accuracy during the warmup, a strength the soccer team has been working on. “We connect very well with each other,” DeGaetano said, “on and off the soccer field.”

The girls soccer team brought home another win on Dec. 11 after fighting through an  80-minute game, challenging the ball, and scoring three goals against Cardinal Newman.

“The team played great overall,” Coach Sarah Garcia said. “The girls were able to pass the ball a lot quicker, which made our attack very strong.”

With many shots on goal in the first half, the offense could pursue many breakways and keep the ball in the offensive third for the majority of the game.

“We dominated most of the game,” digital media sophomore Corina Connell said.

“We really worked together on the field and were able to showcase our hard work over the past few weeks.”

After performing drills to open up the field and using both sides to keep possession of the ball before the game, the team was able to execute more efficiently in goal.

“The drill we worked on [on] Tuesday really gave us an advantage to switch the field,” visual senior Natalia Lanier said. “We were able to open up and get more opportunities on net.”

Both nerves and excitement filled the field as strings freshman Aine Mullen started as goalkeeper for the first time this season. Staying focused and determined throughout the game, Mullen was able to keep a clean sheet in goal.

“Once I got on the field and the whistle blew, I focused on the game and I didn’t feel nervous anymore,” Mullen said. “I wanted to perform well for my teammates.”

The team has improved not only through training, but also through building relationships and respecting one another. The strong bonds they have created carry beyond the soccer field.

With room for improvement, Coach Garcia has plans to continue the growth of the team and work on set plays that were not fully executed during the game.

“We were called offsides many times,” Coach Garcia said. “[That’s] definitely something we need to work on in the future. But overall, the girls fought a tough match and I’m very proud of them.”