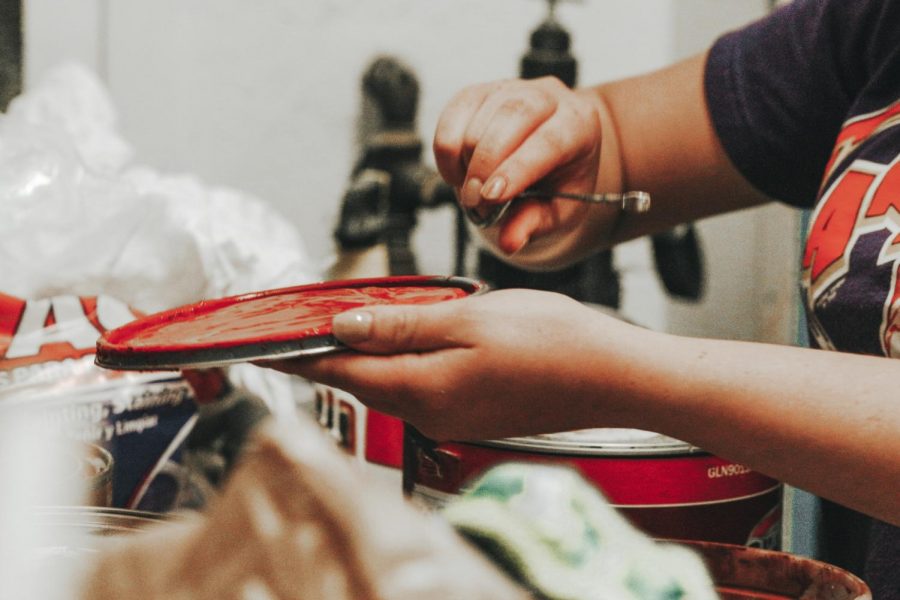 Music blares through the mirrored studio as 20 students lie on the floor, legs pointing to the ceiling. A sit-up punctuates each beat of a pop music track. The students continue this cycle until theatre dean Michelle Petrucci stops them. All of the girls stand in front of the mirror with their backs turned to the boys as they belt the lyrics, “No doubt!” in unison. The pace quickens, and each girl rushes to her dance partner at the other end of the room, tap shoes barely touching the floor.

For the cast of this year’s fall musical, this conditioning has become a daily routine in preparation for the production’s intricate tap routines. The romantic comedy “Crazy For You” opened in Meyer Hall on Oct. 25 and continued through Nov. 3.

“The conditioning allows my ankles to be looser, and I’m able to keep up my stamina,” female lead and theatre senior Dylan Lugosi said. “I’m more able to sing and tap at the same time because of the cardio in conditioning.”

The story follows Bobby Child and his plan to put on a play at his soon-to-be foreclosed theater so that he can pay the mortgage.

Though the musical opened in 1992 on Broadway, brothers George and Ira Gershwin wrote the music and the lyrics in the 1940s. The show is largely made up of numbers from other Gershwin productions such as “Treasure Girl,” “A Damsel in Distress,” and “Girl Crazy.”  The band department has joined the production to deliver the complex rhythms and harmonies of the Gershwins’ compositions.

“It sounds like an old classic musical because the music is from the ‘40s, but the show was written and put together in the ‘90s,” theatre teacher Andrew Gilbert said. “[The songs] that were in the ‘40s were brought by [Ira and George] Gershwin, so it sounds like a really old show.”

Similarly, the tap component requires extra coordination for students who are learning the fundamentals as they rehearse.

“I feel like [tap is] a dying art, [and] I’m really glad I’m getting the experience right now,” theatre junior Jaime Brustein said.  “Especially since [tap] is something I want to pursue, being involved in productions requires work.”

While some agree that the art form is indeed dying—The Washington Post called the Signature Theatre Company’s 2017 revival of the musical “prefab”—stage manager and theatre junior Isabella Betz sees tap not as an “old showbiz style,” but as an agent of change in the plot.

“When it comes to musicals, sometimes people think, ‘Oh, there’s so much excess dancing. How could this bring along the story?’” Betz said. “But you realize that these tap numbers really do move the story along, even if it’s just seven minutes of tap.”

Theatre dean Michelle Petrucci choreographed the tap numbers along with theatre junior Heather Cruise, who demonstrated the movements to the rest of the cast.

“[The students] will actually be able to approach style and intricate sounds together a lot better,” Ms. Petrucci said. “[One of the things] I have said is [to] imagine you’re tapping on ice. You don’t break the ice, because we have a tendency to bang our feet on the floor.”

In addition to tap, the first act includes a number with “sounds and rhythms from everyday stuff,” Ms. Petrucci said. Performers used buckets, hammers, and shovels to create rhythms to dance to.

In addition to the actors, the band students in the pit have been practicing after school to piece everything together during tech week. Lugosi is already anticipating the combination of the diverse art forms.

“I love the collaboration between the departments in order to make this show really come to life,” Lugosi said. “[It] allows the pieces of the puzzle in the show to come together.”

As far as the musical component, Mr. Gilbert has been preparing music students to play the production’s songs live.

“What sets us apart from other schools is that we use a completely student-based system: The set is built by students, our orchestra is students, [and] our cast is students,” Mr. Gilbert said. “There’s no other school that could pull off a Gershwin show without the calendar musicians that we have here at the school.”

“I’m excited for it all to come together, because that’s what’s so cool about theatre,” Ms. Petrucci said. “I want a supportive full house for opening night.”