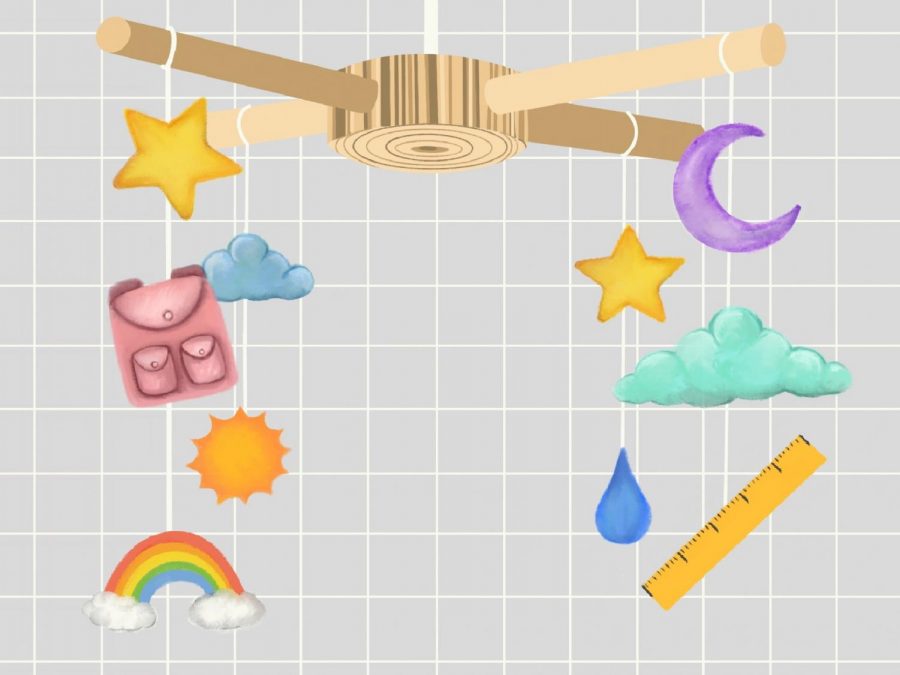 Leaning back in her desk chair with her hands rested on her stomach, science teacher Diana Hertel jokes about her recent experiences going through pregnancy. She laughs about her sudden shift to a “5-year-old’s diet” of pizza and pasta, and she’s far from alone in her pregnancy journey.

“Baby on Board” signs won’t be an uncommon sight in the faculty parking lot, with multiple staff members expecting newborns in the coming months. Four faculty members—science teacher Anuska Larkin, technology support Edward Maniaci, social studies teacher Kathryn Bregman, and Ms. Hertel—are due between Halloween and February, so the school has begun preparing for their leave.

Before a teacher can officially go on maternity or paternity leave, they must submit a request to the School District of Palm Beach County and discuss their leave with the principal. The District, Principal Dr. Susan Atherley, and the teacher can then begin scouting for a fill-in.

To find a temporary replacement, the District is required to advertise for at least five days. The teachers and Dr. Atherley, along with other faculty members, can join in on the hunt to ensure a reasonable substitute is selected. Once candidates are identified, they are interviewed by Dr. Atherley and go through a process to get cleared to substitute.

“I feel like we’re putting the best qualified people we can find in there,” Dr. Atherley said. “Most of our teachers care enough about our kids that they want them to get good instruction.”

In Ms. Hertel’s case, science teacher Marilynn Pedek Howard recommended a recently retired chemistry teacher she knew, whose name hasn’t yet been released. Dr. Atherley and Ms. Hertel have been working to get this retired teacher cleared and prepared to replace Ms. Hertel while she is on leave for six weeks after winter break, since her baby girl is due on Jan. 8, 2020.

“The plan is to have somebody come in that has a lot of chemistry experience,” Ms. Hertel said. “As long as she’s still OK to do it when the time comes, that’s what’s going to happen. She definitely knows what she’s talking about. I just hope [my students] take advantage of her expertise.”

In addition, Ms. Larkin will temporarily be entrusting her position to Sandy Schulman, a previously certified teacher who taught physics. While Ms. Bregman’s substitute is still undetermined, Mr. Maniaci will not be temporarily replaced in his position as technology support. Instead, technology coordinator Edward Hornyak will be absorbing a heavier workload in regard to addressing technical issues around the school.

“I want to be there for my wife and my new son … I just need time to settle with the new growth of my family,” Mr. Maniaci said. “[Mr. Hornyak] oversees the whole department, in which it’s just me and him. He’s going to be the one taking all the mission critical calls while I’m gone. He’s fully capable of doing both roles, but there’s a lot of work to be done.”

Although finding temporary teachers hasn’t been a problem thus far, problems could still arise if the stand-in were to cancel. Ms. Hertel has expressed her concerns with the uncertainty of the status of her prospective substitute, stating that nothing is “set in stone.”

Regardless, having a temporary teacher for any period of time can have an effect on the students in the classroom. Many trust the assurances of their teachers, although they are still skeptical as to whether they will learn as well as they have been under their current teachers.

Despite students’ concerns, many believe teachers deserve the time off to bond with their family and newborn. The faculty who are leaving will be taking breaks ranging from about two weeks to 12 weeks.

“I feel like they should get at least three months off,” Dormeille said. “You want to love that baby, you want to comfort that baby—I don’t think that can happen in a few weeks.”

Dormeille speaks from personal observations. Her mom has three kids, while her dad has six, so “it’s a lot stacked up,” Dormeille said. She has experienced first hand the stages of raising a small child and the amount of attention needed for a baby. Other students agree with Dormeille’s opinion on teachers having extended time for maternity or paternity leaves.

“It’s challenging to balance work and the kid: Trying to do and get everything on time is [hard],” visual sophomore Veronika Zaloginova said. “[They] definitely deserve more weeks [off] because it is important to look after the baby before it’s old enough and it’s a lot of hard work, especially for new moms.”

Zaloginova is also no stranger to taking care of a baby, as she has helped her stay-at-home mom take care of three younger brothers most of her life. Her father is able to support the family and allow for her mother to stay home with the kids, which is a full-time job in and of itself. However, some choose to return fairly quickly after giving birth.

“They don’t give us a lot of maternity leave, so I decided to come back [after six weeks],” Ms. Hertel said, “but only because I can afford it, in terms of my dad, [who] is here. He will be our nanny, so I trust him. My dad is a retired elementary school teacher, so he knows how [to take care of] kids.”

Most teachers need to turn to family members to help take care of their newborns because of the lack of paid maternity leave available. Ms. Hertel is applying for Short Term Disability, which allows her to be gone for six weeks but only receive a portion of her regular salary.

According to Article 22 Section 1 of the “Collective Bargaining Agreement Between the School Board Of Palm Beach County, Florida And Service Employees International Union/ Florida Public Services Union (SEIU/FPSU),” faculty requesting maternity leave must use their “accrued sick days.” Teachers are given one sick day every month of employment and four sick days on the first month of every contract year.

However, if the accumulated sick days don’t cover the desired time, teachers must use unpaid personal leave. This is often an unaffordable option for teachers, as most of them need to go back to work in order to support their family. In fact, having and raising a kid from birth until age 17 costs over $200,000 for a middle-class family of four, according to CBS News.

“[It’s hard] having to go back to work so soon after having a child, because you want to be there for your kid,” Dormeille said. “But at the same time, you need to rack up that cash to take care of the kid, so I feel like that would be the biggest challenge.”

Because many sick days are used for doctors appointments and actual days off needed for illness, some teachers are faced with a shorter amount of time with their newborns. This can be difficult for new mothers who want to be there often for their children.

“The reason why people do maternity leave is because it’s a bonding time with your baby and this is what, I think, all mothers look forward to,” Ms. Hertel said. “Six weeks is going to pass by really quickly, it’s going to be hard to come back, but, you know, [I’m] just being there [when] I can.”

Besides the restricted time and pay, teachers have to focus on preparations for their children both inside and outside the home. Mr. Maniaci mentioned that his in-laws would be helping with the baby and that his wife has been reading up on parenting books in preparation for their newborn.

“It’s a life-changing event. My life, as it is now, is going to be totally flipped upside down when it’s time for me to have responsibilities with helping a new human being,” Mr. Maniaci said. “You know, it’s exciting, [but] the anxiety levels are so high right now. I almost feel like I’m swimming.”

Despite the anxieties that come along with raising a new child, the faculty is confident in themselves and in each other to take on this new chapter of their lives.

“We want them to really enjoy the process,” Dr. Atherley said. “It’s a very special time.”

“Well, it’s all going to be a challenge,” Mr. Maniaci said, letting out a chuckle. “I’m going to learn how to be a parent. It’s my first child, so that’s the challenge right there—just learning how to be [a parent]. [But] we’re humans, so every day is a learning experience. From riding a bike to … learning how to drive a car. You know, life is all about new experiences, so [this is a] new chapter of my life and my wife’s and my family’s life.”