KICKING OFF THE SEASON WITH GIRLS SOCCER JAMBOREE 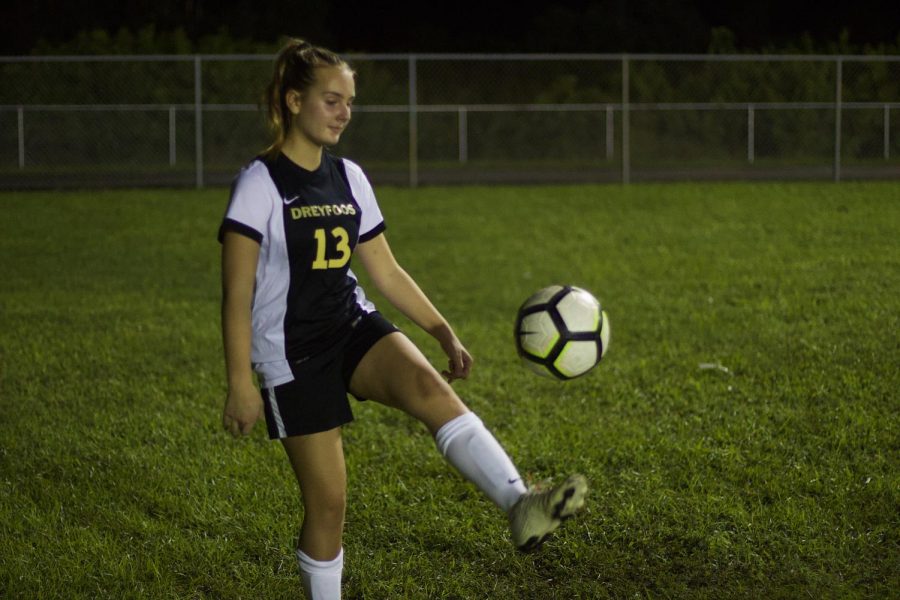 Playing left back, theatre sophomore Grace Trainor juggles the soccer ball during warm-ups in preparation for their game against Santaluces High School. “It was a good season opener,” Trainor said in reference to their tie. “We have a lot to work on.”

The girls soccer team competed against FAU High School and Santaluces High School in two separate 20-minute games as a part of Olympic Heights High School’s ninth annual soccer showcase on Nov. 4. The Jaguars walked off the field last night after tying with both their opponents 0-0.

“We’ve been conditioning for a month, and we’ve been getting together as a team to try and find that cohesiveness, but I think we’ve still got a long way to go as far as getting used to playing with each other, which is why I like these pre-season games,” Ms. Garcia said. “You can see that whole field experience we don’t have at school.”

In the first game against FAU, theatre sophomore Grace Trainor started on the field as the left defender. Trainor had been busy tapping her toes at “Crazy For You” rehearsals, but when the show closed, she laced up her cleats to join the Jaguars for the start of the season.

“I think the first game was a rough start, [but] I feel like once we get adjusted and get more put together by playing together, it’ll be better than it was tonight,” Trainor said. “Now, we know what was good and what needs more work for the second game.”

With that in mind, the Jaguars were optimistic for the outcome of their second game, but the end result was the same. Shortening the clock to 20 minutes per game raised the stakes and pushed both teams to play the best they could.

“Both teams fought for the ball, so the game was going back and forth,” Santaluces freshman Allison Winchester said. “All the girls were working hard, so the game was at a high intensity rate. It was a good season opener for both teams.”