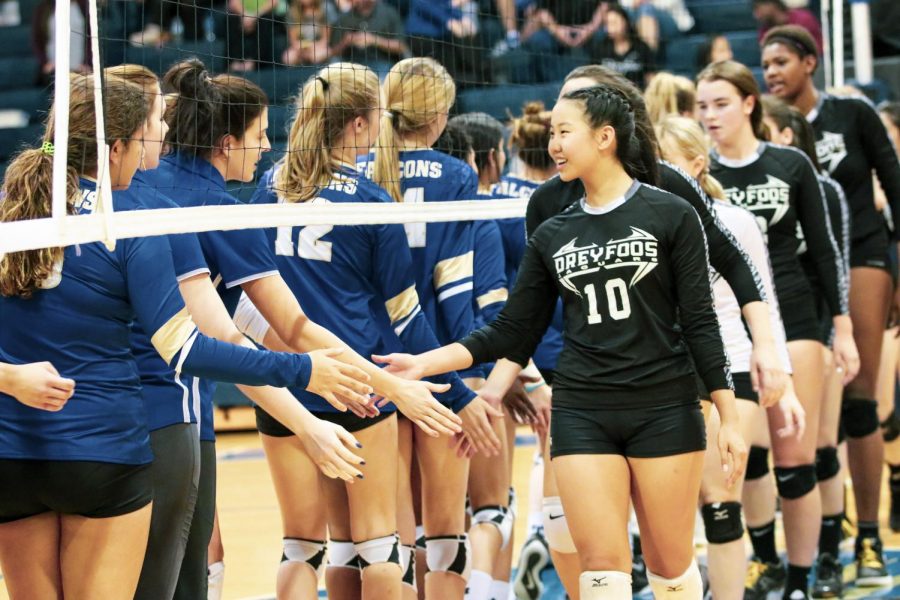 The girls volleyball team congratulated the Menendez High School Falcons on their win after the Regional Quarterfinals game ended.

After winning their preliminary games, the girls volleyball team won Districts for the first time ever, advancing to the regionals bracket. The Regional Quarterfinals game was played in the gym, filled with supporters cheering for the Jaguars. Fans’ voices were lost, players’ knees were bruised, and many tears were shed for the seniors, who played their last game and lost to the Menendez High School Falcons.

Dreyfoos won the first set as Co-Captain and visual senior Amanda Cohen hit the winning serve, ending the first set at 25-10. Instantly starting the second match, visual junior Julia Gonnello spiked the ball over the net, scoring a point for Dreyfoos. Without letting the loud fans or the high intensity of the game distract her, Gonnello channeled her energy into the ball, exerting power with every shot.

“I think certain situations can be more stressful and some more exciting,” Gonnello said.  “Having a supportive team, an amazing coach, and good energy on the court makes pressure way less stressful. I feel like I perform better in fast-tempo games as well.”

Later on in the second set, Co-Captain and vocal senior Czhen Beneby leaped into the air, blocking the opposing spike and tying the two teams at 3-3. After Beneby’s success, vocal freshman Erin Crossey led the stands in chanting “Let’s go, Jaguars” as Beneby ran into the center of the court to celebrate with her teammates. Crossey attended a few games prior and predicted that the Jaguars would catch up to the Falcons’ 11-18 lead based on their improvement throughout the season.

“I have definitely seen the girls improve because I don’t think they won very much in the beginning of the season, but once they got to Regionals, they got really good,” Crossey said.

The Falcons took the second set, but as the third set began, the teams switched back to their home courts and the crowd grew rowdier.

“I think the energy in the gym helped the players in the game [during the] first period,” band junior Samantha Nickles said. “But during the second period, the team kind of died down and didn’t do as well, therefore losing 15-25 in the second game.”

With both teams tied 7-7 in the fourth set, band junior Autumn Wong cheered on the other players on the court. As setter, Wong had the role of maintaining a high energy level for the team. Wong encouraged her teammates to get out of their heads after losing the second set.

“Getting good sets is half the battle, as volleyball is a mental game,” Wong said. “Calling out the other [team’s] setter and getting into the other team’s head helps boost our confidence.”

Dreyfoos won the third set 25-16 and continued on to face Menendez in a fifth tie-breaker set, which was only played to 15. The Menendez Falcons won the set 16-14, therefore advancing to the next round. Although the season was over for the Jaguars, Gonnello was content with their successes.

“This team has been truly amazing and absolutely hysterical,” Gonnello said. “Winning Districts was definitely huge. Proving to ourselves that we could come back from losing 9-13 in a fifth set and win was super rewarding. We all worked so hard, and it paid off despite the outcome of the game.”