IN HONOR OF OCTOBER 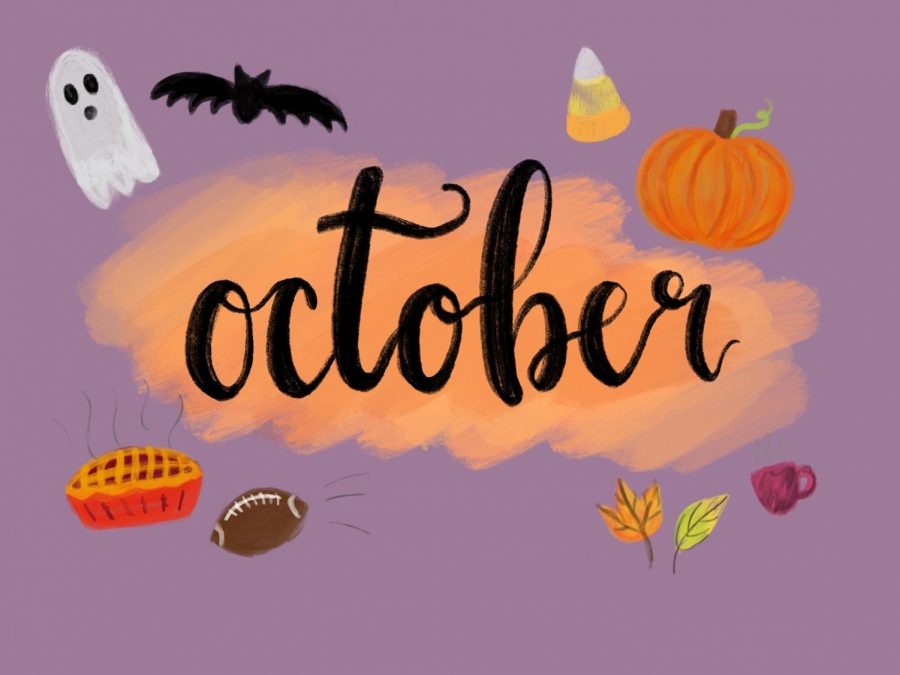 After taking its sweet time, September has gone and October has arrived. For many, that means Halloween decorations, three days of cool weather, and seeing #spookyszn on every social media post. In honor of October, The Muse has compiled a few recipes and movies to set the tone for fall.

I’ve always wanted to make macarons, but I was never quite sure how to go about it. I know there are recipes and resources online, but the Kids Baking Championship made it look so hard that I never got around to trying to make these. Courtesy of Tatyana’s Everyday Food, now is my chance to finally make macarons, and you can feel free to make your own, too!

Place parchment paper on two baking sheets and prepare a large pastry bag with a round tip.
For the macaron batter, sift the almond flour, spices, and confectioners’ sugar into a large mixing bowl.
For the meringue, mix the egg whites and granulated sugar for three to five minutes on high speed until the consistency is fairly thick. Stiff peaks should begin to form in the mixture.
Fold the meringue into the dry ingredients until it settles back down onto itself in 10 seconds. Then, place the batter into the pastry bag.
Pipe 1–1 ½-inch disks of the batter at least 1 inch apart on the baking sheets. Let the cookies sit for an hour at room temperature and preheat the oven to 320 degrees Fahrenheit. Then, bake for 17–18 minutes until the edges of the macarons are golden brown. Let them sit and cool.
To make the buttercream, whisk the softened butter, vanilla, and spices on high speed for several minutes until the cream looks fluffy. Continuing to whisk at high speed, gradually add the sugar for two to three minutes.
Lastly, add the pumpkin puree to the buttercream and mix for about 20 seconds, or until the puree is fully mixed in. (If the buttercream starts separating, add ½ cup of confectioners’ sugar.
Place the buttercream mixture into a pastry bag.
Pair up the macaron shells by size. Start with the bottom cookie and pipe buttercream around the edge to leave space for caramel sauce in the center. Then, add the caramel sauce and place the other cookie on top.
Place the macarons in an air-tight container in the fridge for two days, then allow them to thaw for 30 minutes at room temperature before enjoying.

If I’m being 100 percent honest, I don’t know how these are going to turn out and I’m a bit scared. I’m not the biggest fan of apple cinnamon, but for the sake of fall and October, I’m willing to give this recipe a try, courtesy of Rachel Conners.

Preheat the oven to 350 degrees Fahrenheit. Use aluminum foil or parchment paper to line an eight-by-eight inch pan, then spray with cooking spray and put it aside.
Melt 1 tablespoon of butter in a small skillet, then add 2 tablespoons of brown sugar and the diced apples to the skillet.
Stir the ingredients together, letting them simmer for about five minutes on low heat, or until the apples are slightly soft.
Set the skillet aside as you prepare the blondie batter.
Melt ½ cup of butter and combine it with the remaining brown sugar in a large bowl. Add the egg and vanilla; then, whisk the ingredients together.
Stir in the flour and salt, but don’t overmix. Fold the cinnamon chips and apples into the batter, and spread the batter out evenly onto the pan.
Bake the blondies for 30–40 minutes, or until a toothpick inserted into the center comes out clean. Then, let them cool for at least two hours or let them refrigerate for easier slicing.
Enjoy!

Throwback Movies for the Season:

“Halloweentown” (1998) – You can never go wrong with this movie—ever. Watching “Halloweentown” almost feels like an unspoken tradition of every family across America. If you haven’t seen the film yet, it should definitely be in your top two must-sees for the season.
“Hocus Pocus” (1993) – Max Dennison moves to Salem with his family, but upon arriving, he finds an abandoned house where he accidentally summons three witches and has to find a way to reverse his actions. Classic.
“Casper” (1995) – Everyone knows who Casper is. If you’ve seen this movie, then you know him. If you haven’t, then you still probably know him. Casper and his ghost roomies are the pinnacle of fall comedy.
“Twitches” (2005) – This is a classic separated-at-birth story, in which twins build a sisterly bond through their shared magical powers. Total girl power movie.
“The Nightmare Before Christmas” (1993) – Okay, let’s set something straight: Jack Skellington is the cutest. He’s the pumpkin king but is willing to give that up to become Santa Claus because he doesn’t want to scare people anymore. This movie admirably combines the spirit of Christmas with the spooky feelings of Halloween in a way that makes us all excited for the holiday season.
“Ghostbusters” (1984) – Admit it—it’s been awhile since you’ve seen this movie, and that’s okay. But you need to watch it, because it’s a classic. In fact, the theme song is probably going through your head right now.
“Hotel Transylvania” (2012) – I know that this isn’t too much of a throwback, but come on. This movie is comedy gold. The heartwarming story between a daughter and father, along with a cheesy teen romance and a family full of crazy monsters, makes this film a must-see in October.
“The Haunted Mansion” (2003) – I remember this possibly being the scariest movie of my childhood, besides “Coraline” of course. However, Eddie Murphy’s comedic performance as the father of the family is enough of a reason to watch the film.
“Bewitched” (2005) – This puts a lighter mood on the spooky season vibes. Will Ferrell and Nicole Kidman play two co-stars in this fantasy romance. It’s a very I-will-love-you-despite-your-flaws (in this case, her “flaw” was being an actual witch) type of movie.
“Coraline” (2009) – Ah, yes. Your 9-year-old self’s worst nightmare. “Coraline” is by far the scariest children’s movie in history. I know it has a good message about being careful what you wish for and appreciating family, but wow. Sewing buttons into children’s eyes? A blind spider-woman chasing a girl? I guess that’s what makes this movie the best around October.