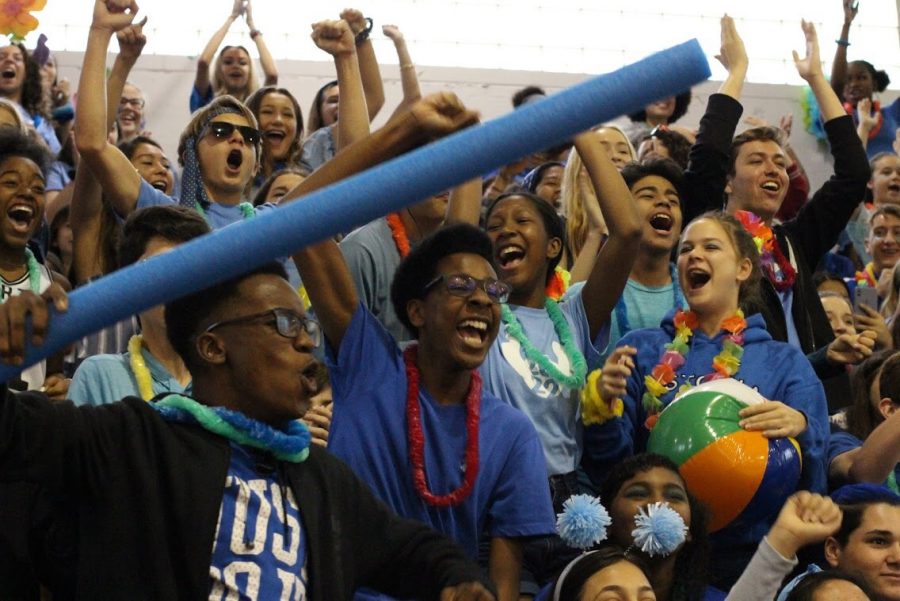 The Class of 2022 cheer on as communications freshman Katie Davis snatches a seat in musical chairs. The freshmen earned second place in the competition, with seniors taking the lead.

The clouds gathering outside the gymnasium on the morning of Feb. 1 may have appeared dreary, but the atmosphere inside the building was anything but. As over 1,000 students crammed into the gym’s blue bleachers, they chattered in excitement, adding to the noise with occasional screams and chants while they awaited the climatic finale to Spirit Week: Pep Rally.

“I was super excited to be attending my first Dreyfoos pep rally because of all the fun people were telling me about,” visual freshman Shina Nguyen said. “Everyone around me was showing off their spirit.”

While most students were only concerned about the state of their outfits, SGA and class council members were busy organizing the week’s events. Planning the pep rally in conjunction with every other Spirit Week activity was no small task.

“It’s a lot of moving parts,” SGA sponsor and media specialist Sarah Garcia said. “There are a lot of different events, not to mention setting up, breaking down, and making sure that my students are getting an SRA so that they can help me. It can get very stressful.”

The seniors, donning black pirate hats with flashing red and blue lights, made their dramatic entrance once the other classes had been seated. Students then engaged in the first game of the day: musical chairs. Seniors emerged victorious, with freshmen in second, sophomores in third, and juniors falling in fourth place.

The next event, in which each class tried to make the most basketball free throws in one minute, ended in a win for the juniors; seniors and sophomores tied for second place after the sophomore competitors demanded a recount. The freshmen took third place.

Meanwhile, piano senior Annemarie Gerlach and vocal senior Armin Khoshbin, the SGA co-presidents, worked to ensure no one lost their enthusiasm, though some may have lost their voices in all the noise. Holding up the spirit stick, Khoshbin yelled, “I got the cake in my hand right now! Who’s gonna take it home? Who wants it?”

Aided by a few inflatable dinosaur costumes to go along with the theme of Jurassic World, sophomores trampled the other classes in the next activity, student-made skits. Juniors came in second, followed by the seniors and the freshmen.

“When our skit came in first, that was really exciting because we were not expecting to do well, but we knew we had a wild factor with the dinosaur costumes,” skit writer and theatre sophomore Trace Baxley said. “[Theatre sophomore] Ava Zausner and I thought that from our experience in theatre, we could create a good skit, and that’s what we did.”

Seniors bested the other grades in a karaoke contest, the final event before the class dances. The juniors, who opted for an acapella performance, came in second. Freshmen placed third with sophomores in fourth.

“Pep Rally Day in and of itself is awesome, and we had so much work leading up to it, so it’s great to see something that you personally worked hard on and planned every single little detail for come together so flawlessly,” Gerlach said. “Well, almost flawlessly.”

The main mistake accounting for an almost flawless pep rally came in the next competition, the dances. In the middle of their dance, the juniors’ music cut out. Despite the minor setback, juniors still managed to defeat the seniors, sophomores, and freshmen.

“The best part of Pep Rally was when the juniors won the dance because the girls had been working so hard,” class council president and communications junior Mara Vaknin said. “There was a period of time when they were unsure about the dance, but they really pulled it together in the last couple weeks. It was so much fun to see all their hard work come to fruition with that win.”

Although the juniors won the class dances, the spirit stick settled in the hands of the seniors, who erupted in shouts and applause when the winner was announced. Freshmen and sophomores had tied for third place, so the score was settled in a screaming match that would have made Beethoven cover his ears. The sophomores edged out the freshmen, who were given fourth place in the Pep Rally.

“The seniors always have so much excitement, and they want to make sure their class has a memorable and exciting senior year,” senior class sponsor and social studies teacher Sarah Ray said. “Their excitement is always really infectious.”

Reflecting on his last pep rally as a Dreyfoos student, Khoshbin revealed how it felt to say goodbye to the experience.

“Honestly, I’ll just miss the feeling before my first couple pep rallies, that excitement of just sitting down, standing up, and yelling,” Khoshbin said. “I’ll really miss that. And I don’t think I’m gonna get that anywhere else.”