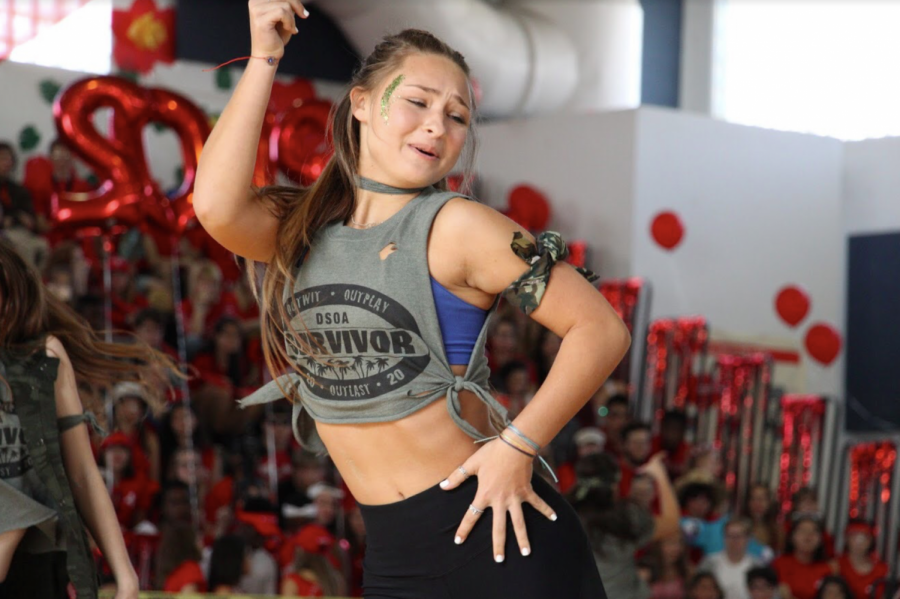 Dance sophomore Ally Christian participates in the sophomore class dance at the pep rally, which included songs such as “Buttons” by The Pussycat Dolls and “Toxic” by Britney Spears. The dance placed fourth overall in the competition, behind the freshmen in third, the juniors in second, and the seniors in first.

Screams and shouts echoed throughout the gym as freshmen, sophomores, juniors, and seniors alike vied for the spirit stick during Spirit Week’s most anticipated event: the annual pep rally. From dodgeball to field day activities, to generation dances and powderpuff routines, students of all grade levels have competed for spirit week points all week in an effort to snatch the coveted title of 2018 pep rally winners. For some, however, preparation for the pep rally began far before spirit week started.

“We put the [day] on the calendar in August before school started and we started talking about spirit week the first week of school at SGA [Student Government Association] meetings,” social studies teacher and SGA sponsor Wendy Zietz said.

Once all students had been dismissed to the gym, the pep rally was underway. After a grand entrance by the seniors, the first game, musical chairs, began. With the freshman eliminated first, followed by the juniors and finally the sophomores, the seniors clinched first place.

In the next event, freshmen faced off against juniors, and sophomores against seniors in a competition to see who could make the most basketball free throws in one minute. The final match between the freshmen and the seniors ended in a surprising victory for the freshmen, in which visual freshman Camar O’Neal only missed one shot of 14.

“[When I was up there] my adrenaline was pumping, it was flowing, and I was just making shots and it felt great,” O’Neal said.

In the final round of freeze dance, the next activity, the freshmen and the seniors battled again for first place, this time with the seniors left as the last ones on the dance floor. The juniors then won both the teacher dress up and karaoke events consecutively, followed by the seniors in second, the sophomores in third, and the freshmen in fourth.

“My favorite part of spirit week is the kids,” Mrs. Zietz said. “And the kids in the sense that when the acapella groups were singing that it went quiet, and the kids started snapping, and just how you honor each other even though there’s the spirit of competition.”

The last event of the pep rally before the winner of the spirit stick and rally itself were announced was met with equal anticipation and excitement. The class dances require much preparation by not only the dancers, but also SGA.

“The most challenging thing, I think, is just communication with the student councils and making sure we have their music, and scheduling out times that they can rehearse,” theatre senior and SGA co-president Madison Burmeister said.

Even after a music mishap, the seniors came out on top, winning the dance competition, spirit stick, and pep rally as a whole. With various decorations and balloons flying everywhere, there was lots of work to be done in order to clean up the gym. Each year, SGA and Class Council members both set up and strip down the gym before and after the pep rally.

“Set-up and break-down is always really fun to me because it’s like the one time of year where all the class councils kind of like get together and kind of just have fun,” digital media senior and co-class council president Ethan Blanc said.

Each pep rally acts as the culmination to a week full of spirited festivities.

“I think my favorite part [is just] this feeling that you get when you’re standing in the middle of the basketball court with the microphone in your hand, and you’re saying ‘Two Oh’ and they’re responding to you,” Burmeister said. “You just get this feeling of warmth that envelops you, and you’re like ‘Wow, this is the school that I go to and I’m so blessed to be a part of it.’”