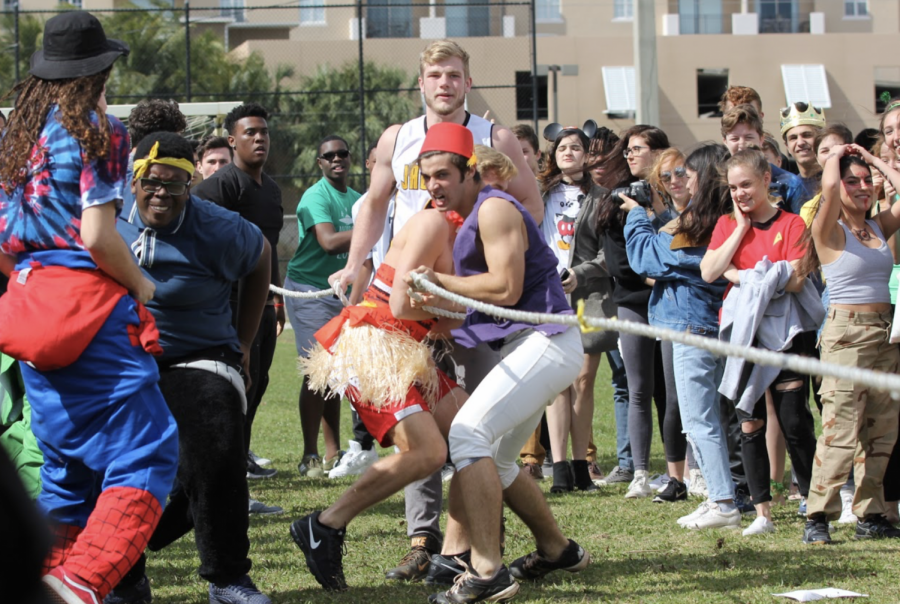 Visual senior Aaron Crawford and strings seniors Allen Cadet and Thomas Devito lead their team to victory during the tug o’ war competition at the end of lunch. The senior team first competed against the sophomores, and later the juniors to secure their win at the end of the match.

Spiderman and Spock compete in a ferocious game of tug o’ war. Vampires and princesses challenge each other to a playful ring-toss match. This is not a behind-the-scenes look at a Warner Brothers movie studio, but day two of Spirit Week: Movie Genre day.

Field day events were held on the soccer field and included a range of contests such as human ring toss and tug o’ war, with participants from each grade level. Of the six total events during lunch, the seniors won four times, with juniors and freshmen each claiming a single victory.

“It’s fun to represent our grades and try to put ourselves out there through participating in these events on field day,” band freshman Maily Nguyen said. “Everyone was really supportive and we felt that we were in a safe space while competing.”

The games began with the frozen t-shirt competition, which consisted of four students attempting to unravel and wear an iced shirt. Visual senior Matthew George represented the seniors for this event, claiming the first victory of the day for his class.

“I was expecting to win, but I realized I was actually winning when I started hitting the t-shirt [against the ground] faster than everyone else,” George said. “I also had a bottle of hot water which helped melt the ice before everyone else’s.”

The next event was the human ring toss competition in which two students from each class threw rings at each other, with one acting as the peg. The juniors claimed their first victory during this event, with the help of communications juniors Pierce Gornick and Johan Kramm.

“It was an exhilarating moment [to win],” Gornick said. “I looked up at God and he said, ‘you’re going to win,’ that’s when I knew for sure.”

After the ring-toss competition was the hula-hoop chain contest, where 10 students from each grade worked as a team to get a hula-hoop to the other side of the chain without dropping hands. Seniors claimed their second victory of the day through this event. The events continued with the three-legged race, leading to the freshmen’s first and only win.

“I think we won because we were experienced,” band freshman and three-legged race participant Sophie Huber said. “We did this at another band event before, and it ended really well. We reminisced on our previous victory to prepare ourselves.”

Following the three-legged race, students took part in the gumball-spoon race and the grand finale: the tug o’ war match. Seniors emerged victorious from both events, securing their win for the day overall. For the past three years, the Class of 2018  has triumphed over the tug o’ war competition, so strings senior Dillon McCormick had “no doubts” about their chances of winning this year.

“I knew we would win and it felt great,” McCormick said. “We won the past three years. It’s good, but it’s going to be sad next year when we don’t have [the victory] to look forward to.”