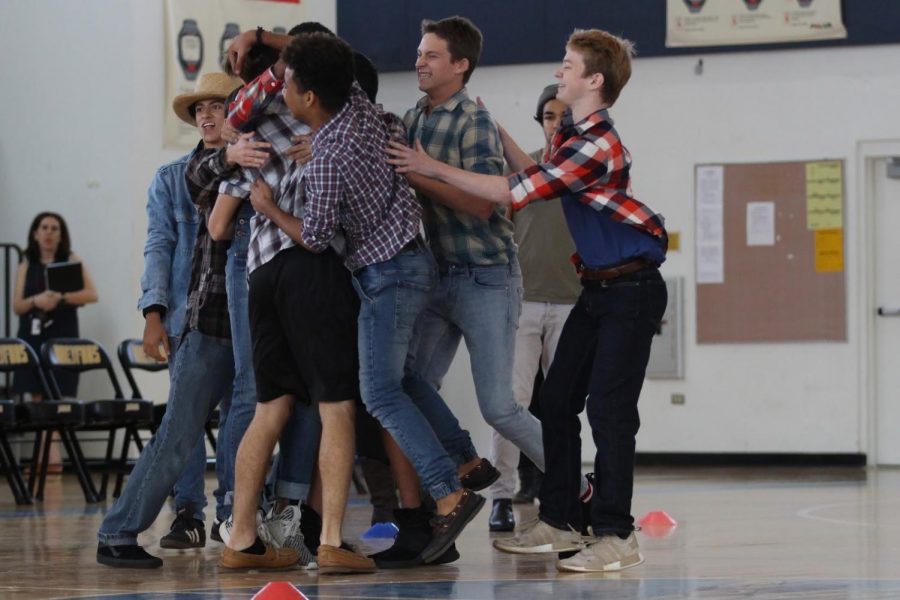 The freshmen dodgeball team celebrate defeating the junior class. Advancing to the final round against the seniors, the freshmen later lost, placing second in the tournament.

A fluorescent red ball hurtled across the gym, as band senior Kyle Tellez caught it with ease. Launching the ball back at the freshmen established a victory for the senior class in dodgeball, the second spirit week event of the year.

“It was pretty awesome to win the entire dodgeball event,” Tellez said. “With the rivalry between classes, I think it was rewarding for the seniors to come out on the top. Everyone has that knowing feeling that the seniors are going to win the events, so I knew that we would win or have a good chance at winning.”

The dodgeball tournament was organized into three rounds: seniors against sophomores, juniors against freshmen, and a final round was determined between the winners of the preliminary rounds. Each round lasted seven minutes, and the victory was based on the team with the greatest number of teammates remaining, or until all the teammates from one class were out.

The first round established a victory for the seniors against the sophomores. The following round was between the juniors and freshmen that ultimately led to a win for the freshmen. Band junior Grant Conley represented the junior class and became the last teammate remaining against the freshmen team.

“I remember just looking around and seeing none of my teammates on the court,” Conley said. “I didn’t even see my teammates go out until I realized that I was the only person left that was representing the juniors. I didn’t expect losing at all. We tried our best, but ultimately, the freshmen beat us.”

“I competed in dodgeball last year,” Tellez said, “But this year, there was a lot more pressure to win because I was in the senior team. I personally had a lot of fun representing the seniors, and I knew that we had the advantage of winning.”

The freshmen came in second at the tournament, fueling the rivalry between the upper classes.

“Competing against the seniors was pretty fun,” theatre freshman Cooper Musser said. “We were able to beat the juniors, and we were fearless the entire time. Although we failed to beat the seniors, I still think we represented our class well, and we did the best that we could.”

Unlike last year where the senior class lost to the other grades, the Class of 2018 were able to redeem their title for first place.

“I competed in dodgeball last year,” Conley said. “Competing in dodgeball this year is kind of like a rite of passage. The day that you switch bleachers on pep rally, you immediately associate yourself with your new grade. It’s that process of representing a new class that is so rewarding.”