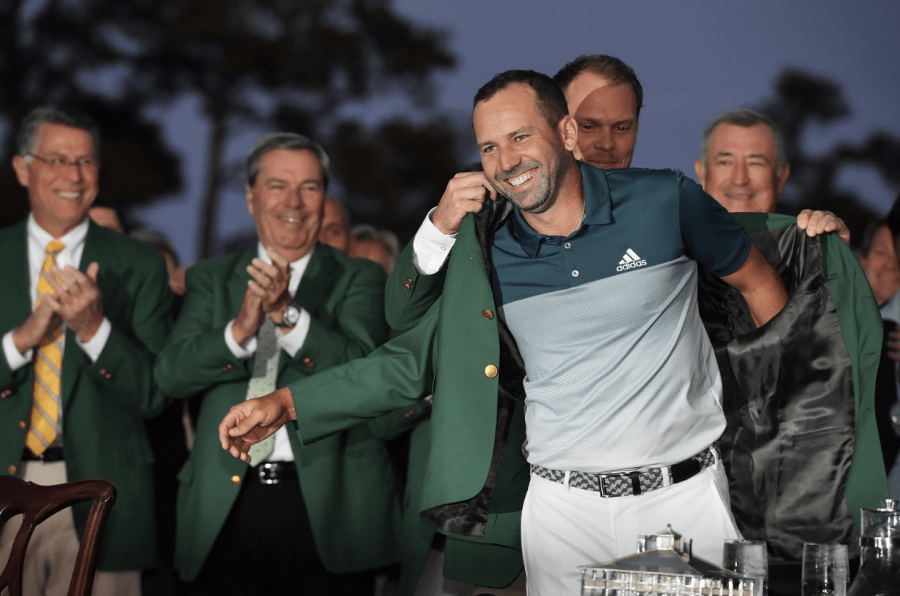 Sergio Garcia, 2017 Masters tournament winner, is awarded with the prestigious green jacket that is passed on every year from previous winners. Garcia won the tournament Sunday after a difficult battle with fellow PGA tour player, Justin Rose.

As one of the most prestigious sporting events in history, The Masters golf tournament is a competition like no other. Tickets are nearly impossible to obtain. Many people hope to be able to witness the crowning of the champions with the iconic green jacket at the end. The Masters is the truly one of the most highly anticipated events in golf.

This year’s Masters was held April 6 through April 9 at Augusta National Golf Club in Augusta, Georgia, where it has been held every year since 1934. The tournament is recognized as a “Major” in golf, which means that it is one of the four most exclusive tournaments in golf along with The U.S Open, The Open Championship, and The PGA Championship. The event never fails to disappoint fans or players with its tradition and class. The course at Augusta National alone attracts thousands of fans with its beauty which can be seen in the rows of Magnolia trees, open fairways, perfect putting greens, and in its famous cobblestone bridge on the 12th hole. Additionally, the event is always star studded with this year’s celebrities including celebrities such as Niall Horan from One Direction and Snoop Dogg. Each year, the venue has the same menu that it has had for more than 50 years: traditional pimento cheese sandwiches for lunch, and sugar cookie and peach ice cream sandwiches for dessert. Much of the attention that the tournament receives every year is because of the value in traditional things that it never ceases to forget.

This year’s event started off with the ceremonial tee shots on the first hole, hit by Jack Nicklaus and Gary Player, in memory of golf legend Arnold Palmer, who passed away late last year. Immediately after the ceremony, the tournament kicked off with fans rooting for their favorites. Dustin Johnson, a PGA tour player, was the favorite going into the tournament and was expected to win, until he slipped on a wet staircase on Wednesday, April 5 (the day before the tournament), injuring his back and having to withdraw from the tournament. Despite this setback for Johnson, the rest of the players were focused on their games and all went into the tournament with a positive mindset which made for an exciting round on Thursday. When the day was over, Charley Hoffman was the leader in the clubhouse, ready to continue his winning streak the next day.

Friday, Hoffman lost his four stroke lead when Jupiter local and PGA professional, Rickie Fowler, rose to the top of the leaderboard, tied with Hoffman. Fowler had a par or better on every hole, except for a bogey on the 15th hole which is what allowed him to place so high. Fowler’s positive spirit and constant love for his fans has attracted bounds of attention toward himself over the years; he has created one of the the largest fan bases in the history of golf. A Masters win would be the first major tournament win for Fowler, so fans everywhere of all ages were likely crossing their fingers that he would pull through with a win after seeing him on the leaderboard on Friday.

The following day, Saturday, is known as “Moving Day” in the golf world. It is the first day in all golf tournaments where the group of players is remarkably smaller due to cuts being made if players didn’t shoot a low enough score to move on. Saturday is where players really start focusing on their game and getting on the leaderboard in hopes of winning the tournament the next day. Fowler didn’t do as well on Saturday, but still managed to stay in the top four along with other fan favorites: Jordan Spieth, Justin Rose, and Sergio Garcia. At the end of the day, Justin Rose held the lead and was set to play with Garcia in the last group to tee off the next day.

Sunday was by far the craziest day of the Masters. Sergio Garcia and Justin Rose stayed close together the entire time as they fought for the lead. Unfortunately, Fowler and Spieth fell apart and lost their spots in third and fourth place, respectively, that they started the day with. However, watching first place move back and forth between Garcia and Rose was entertaining enough to steal the show anyways. Going into the 18th hole, both players were tied and just when we thought it was all over, Garcia and Rose both parred the hole, sending themselves to play 18 once again as a tiebreaker. Garcia ended up making a birdie on the hole while Rose made a bogey, which allowed Garcia to steal the victory making him the 2017 Masters Champion.

The traditional green jacket ceremony happened directly after Garcia’s win and it was a very special time for him as well as for the game of golf as a whole. Golf fans everywhere celebrated his victory and congratulated him as well as other tournament participants on social media. The 2017 Masters is a tournament to be remembered forever. Sergio Garcia’s name will certainly go down in history.