BEHIND THE SCENES OF LIPDUB 2020 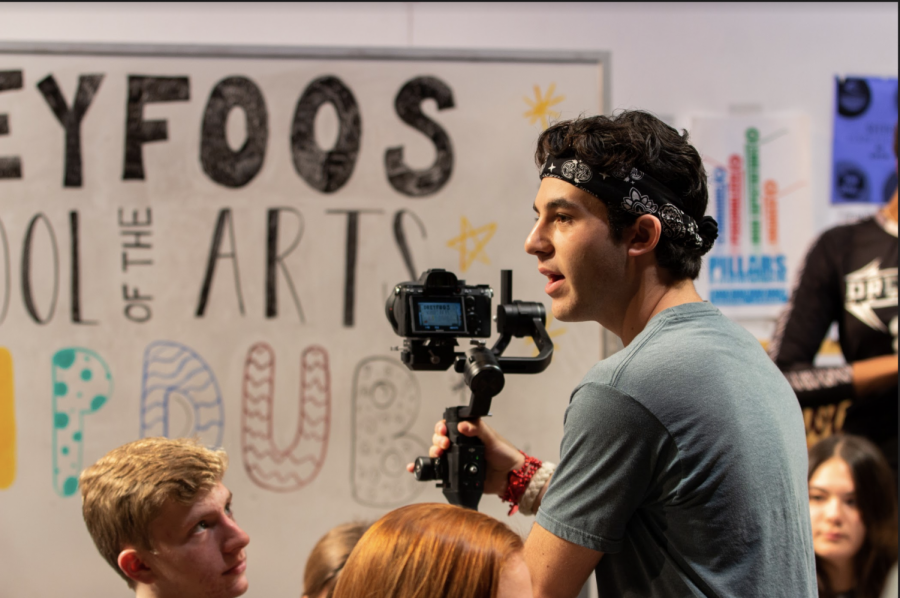 Communications junior Adam Goldstick films the first scene of Dreyfoos’ second annual Lipdub. With over a month of preparation, students came together to sing, dance, and show off their school spirit. “My ultimate goal through all this work and collaboration is to be able to showcase what Dreyfoos really is: the people, the culture, the quality of the school, and the spirit,” Goldstick said.

On Day 2 of Spirit Week 2020, students came together to film the second annual schoolwide lip dub. With spirit radiating through the camera lens, SGA members organized the project and brought the Dreyfoos culture to life.

SGA member and communications junior Adam Goldstick explained that last year’s lip dub was an “experimental year,” so the organizational process was different when planning this year’s video. The first initiative was to make various committees for each art area. These committees were elected by the deans of each art department, who chose two to five students to represent their respective art areas. Once the assignments were complete, they scheduled meetings to plan the event.

“We had the [committees] pick their singers for the area, Goldstick said. “Once we had that all together, we drew the map.”  Over winter break, the committees planned what music they wanted, and, as soon as break ended, the process began with Goldstick mixing the music.

“It was something I had never really done,” Goldstick said. “We had challenges this year finding clean music and shorter songs.”

In the previous lip dub, songs ranged from a minute to a minute and a half, whereas this year, the longest song is one minute. On average, [lip dubs] are about “ten to fifteen minutes, maximum,” according to Goldstick

Compared to last year’s 12-minute video, this lip dub was planned to be eight minutes exactly. The focus was more on art areas and what students do that differentiates them from other schools, along with clubs and sports. Students were divided into these categories on a map organized by SGA.

Over the past week, after-school rehearsals began, the walkthrough was timed, and singers in the lip dub memorized their songs. Late in the week, everyone participating in the lip dub met in Meyer Hall for a brief review of the upcoming day. During this meeting, they took one final look at the jobs of each singer.

“This meeting really brought it all together and was really a turning point for the project,” Goldstick said. “There were a lot more singers than last year, and not only is it their job to sing, but also [to] lead their sections.”

Filling in all of the intricate details was a goal for this year’s lip dub. Seemingly minor objects in the background have the potential to make the video stand out.

“We decorated the school a lot more: The hallway decorating was based around the lip dub. We also ordered a lot of streamers and flags,” Goldstick said. “We wanted to fill in the details and put in small things in the background that [would make] the video that much better.”

On the morning of the lip dub, singers were sent to their spots to listen to their music for the final time, go over the camera movement, and finalize where each singer had to stand to make the placement work.

“Everyone knows what to expect, where to be, and how to figure everything out,” media specialist Sarah Garcia said. “This lip dub should be better than last year’s.”

When students were dismissed and arrived to their positions at around 9:30 a.m., excitement filled the hallways as everyone awaited the camera.

“It’s awesome because everyone gets to see all the majors and it really shows outsiders what makes Dreyfoos so great,” communications sophomore Tyler Backus said.

The lip dub is a unique way to showcase our arts, our clubs, and our school spirit. With schoolwide participation, Dreyfoos students was able to produce and create their second lip dub, which will be ready to premiere on Friday at the Dance Marathon fundraising event.

“Our arts is really what makes us special, and that’s something that I think really needed to be shown through the lens of a camera,” Goldstick said. “The video itself is for everyone to look back on themselves and their friends and the school, and really just be able to reminisce.”