Legislative efforts to ban “controversial” books are spreading across the nation at record rates, threatening students’ access to diverse voices 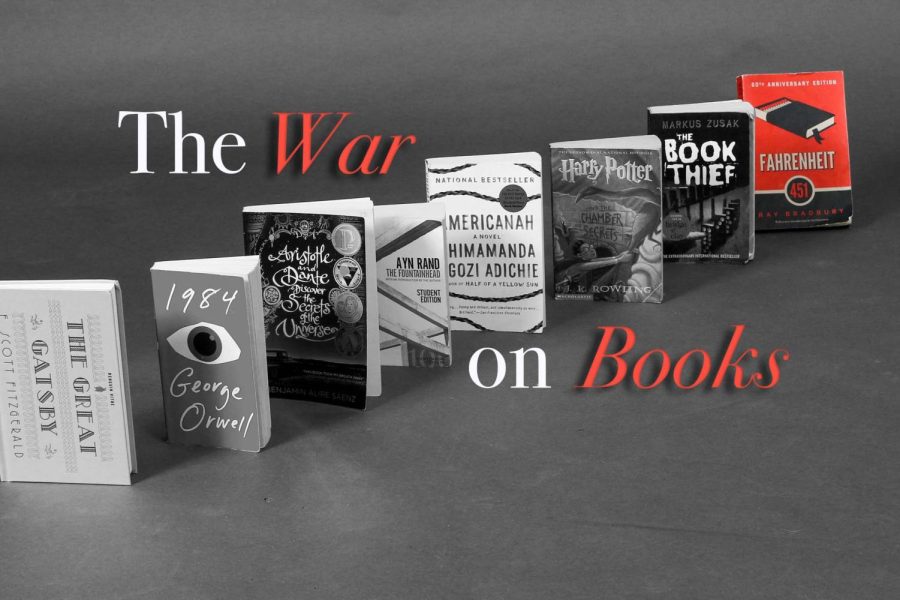 “Fahrenheit 451” by Ray Bradbury serves as commentary to warn against censorship; the title itself corresponds to the degree at which a book burns. It is being censored by parents who clearly missed the point of Bradbury’s dystopian novel, raising the question if people who challenged it even finished the book.

Short on time? Listen to this story on Soundcloud.

“So, this is my life. And I want you to know that I am both happy and sad and I’m still trying to figure out how that could be.” ― Stephen Chbosky, “The Perks of Being a Wallflower.”

“We mistook violence for passion, indolence for leisure, and thought recklessness was freedom.” ― Toni Morrison, “The Bluest Eye”

“Life is a constant struggle between being an individual and being a member of the community.” ― Sherman Alexie, “The Absolutely True Diary of a Part-Time Indian.”

“The only way out of the labyrinth of suffering is to forgive.” ― John Green, “Looking for Alaska.”

These four excerpts are from novels showcasing the human experience. They’re required reading in some classrooms, but they’re banned and removed in others and perhaps most importantly, they’re not alone: These books join 96 others on the list of the Top 100 Most Banned and Challenged Books: 2010-2019.

Book banning is not a problem from medieval times or an overseas issue — it’s a 2022 epidemic that is sweeping over our nation’s schools. The American Library Association’s Office for Intellectual Freedom tallied over 300 challenges of book banning in three months of 2021, not including the majority of incidents that go unreported.

In 2017, the Florida legislature passed a law that permits any county resident, regardless of whether they have any connection to the school, to call for the banning of classroom materials.

This is not an attempt to protect us as students from books that are deemed inappropriate. It is an act of censorship and a violation of our rights.

In recent years, schools have become battlegrounds for political debates. The increased political polarization of our state is seeping into schools, with more politicians trying to push legislation that benefits their own agenda, not the students. Public education should never be political.

Despite dozens of protests against it, Gov. Ron DeSantis signed the Parental Rights in Education Bill, more commonly known as the Don’t Say Gay Bill, into effect on Mar. 28, which intends to limit discussion of queer topics in schools. Not only is the bill incredibly unjust and dehumanizing, but it will likely cause a whole slew of books with LGBTQ+ representation to be removed from school libraries.

Understandable as it may be that some parents would like to have control over what their child reads or learns in school, they should not have any right to control what other parents’ children can and cannot read.

Other Florida bills would make it easier to ban and censor books that are “inappropriate for students,” and Rep. Carlos Guillermo Smith of Orlando expresses major concern that the preface of this law will be twisted, abused, and targeted at books showcasing diversity.

These bills are attempts to suppress our right to education and a ploy to shield us from reality but as many parents note, we have access to that information through other means. And who’s to say that banning books is even effective? In the digital age, what’s stopping students from just looking up banned literature?

When a book is banned from a public or school library, the same text is still accessible to teenagers through the internet. The only thing that banning these books does is keep important conversations about diversity out of the classroom.

Regardless of whether books are banned, people recognize their significance and often celebrate the novels. A surge in book censorship in 1982 spawned the creation of an annual event known as Banned Books Week. The week aims to celebrate the freedom to read any book, even if they are considered “unorthodox.”

Independent and corporate bookstores alike such as Powell’s Books (the largest independent bookstore in the country) and Barnes and Noble (the bookseller with the largest number of retail stores), both showcase banned books sections on their website and in their stores, challenging readers to read what they are told not to.

Just a short walk from our campus is a children’s bookstore, Rohi’s Readery, that has the opposite goal of many book bans: instead of shielding diversity, they promote it and strive to create “great change through reading.”

Many of the books banned every year are the very same books showcasing diverse cultures and identities. By banning these books, our access to new perspectives is limited and our own perspectives are encroached upon.

Notably, a Tennessee county recently banned the graphic novel “Maus” due to “inappropriate language” and a small illustration of a nude woman. Maus, a Pulitzer-prize winner book, depicts events from the Holocaust using mice and cats to represent the Jews and Nazis, respectively. Art Spiegelman, the author, said the school board officials in Tennessee are comparable to Russian President Vladimir Putin and are preferring to “teach a nicer Holocaust.”

The actions of today are reminiscent in the worst way of the era the book is about; a time when book-banning was widespread in the form of large bonfires that destroyed works of literature written by Jews or anything deemed too radical by the Nazis, in efforts to censor “Jewish intellectualism.”

It must be addressed, however, that some books are banned for reasons other than showcasing diversity. They may depict racist caricatures against minorities or use slurs, and countless classic pieces are laden with themes that are deeply offensive towards minority groups.

But banning these books entirely is not the way to handle sensitive topics. These books should be addressed in education and must be taught in a way that addresses the faults in the narrative.

When it comes to battling bigotry, a pen may be stronger than a sword. As the 36th President of the United States Lyndon B. Johnson puts it, “Books and ideas are the most effective weapons against intolerance and ignorance.”

I was always told the entire point of learning history was to prevent ourselves from making the same mistakes again. But, if we forget the darker aspects of our past ever happened, then how can we learn from them?

Whether we like it or not, books with offensive themes are a part of our collective narrative as a society. While these novels do not need to be pushed down students’ throats in English classes, they should not be ripped from their hands either.

​We can not erase aspects from our history just because they are “not pretty,” and we cannot pretend these horrid events did not happen.

As Amy Egbert, a research fellow in Brown University’s Department of Psychiatry and Human Behavior, notes, “the books that are being banned, if handled right, can allow kids to explore the human condition in a safe way.”

But to be frank, the majority of book censorship isn’t even focused on explicit topics or offensive themes.

According to Pen America, an organization that works to defend free speech, most legislation on books seems to target sexuality, gender identity, or race.

The path of book banning we are on now will silence hundreds of nuanced perspectives and leave hundreds of novel stories unheard.

As book bans stifle education across the nation, the Washington Post sheds light on the backdoor book removals “as overworked administrators — weary from managing the pandemic and from turmoil over diversity, equity and inclusion programs — seek to quash further controversy before it can begin.”

It is up to teachers to encourage literature that does not sugarcoat history and instead enlightens students with different perspectives and engages them in a manner that sparks insightful conversation. Society should not be afraid of exposing the truths of the world through literature. It is foolish to think banning books will do anything besides silencing the voices of those unheard.