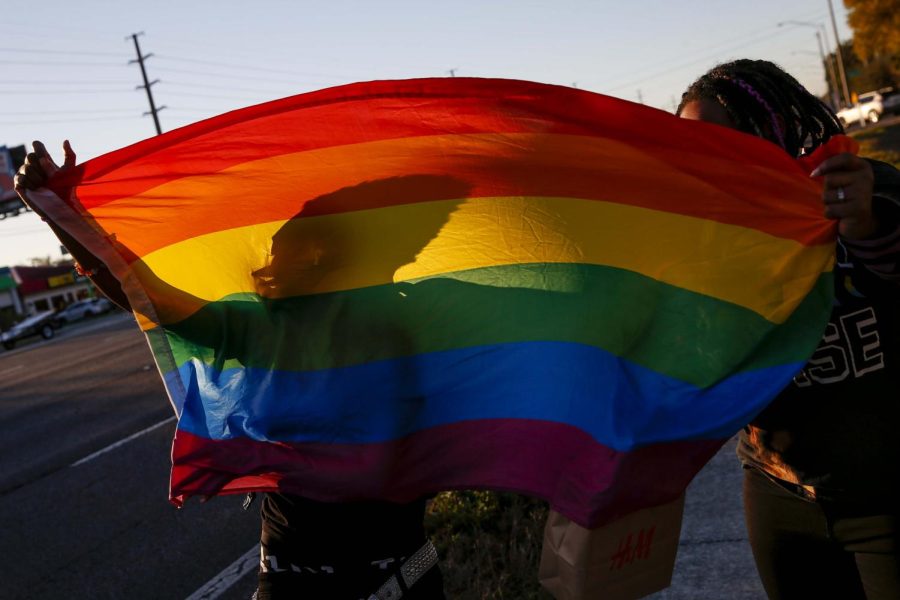 A Pride flag billows in the wind as students go to join a protest at Gaither High in Tampa, Florida, against what critics call the "Don't Say Gay" bills on Monday, Feb. 14, 2022. The Florida Legislature is under scrutiny over the bills that in part read, "A school district may not encourage classroom discussion about sexual orientation or gender identity in primary grade levels or in a manner that is not age-appropriate or developmentally appropriate for students." (Ivy Ceballo/Tampa Bay Times/TNS)

I’ve seen a lot of positive governmental progress in my lifetime. America had its first Black president before I reached double digits, and queer couples had the right to marry before I was even sure of my own sexuality. For most of my life, I have had reason to believe that my rights were secure.

This Thursday, the Florida House of Representatives officially passed the Senator Joe Harding’s “Don’t Say Gay” bill, which will now move to the senate.

Through this, the Florida Legislature has shown they no longer care about the opinions and safety of their constituents, especially those who do not benefit them in upcoming elections. Gov. Ron DeSantis, who is likely to sign the bill if it reaches his desk, is spearheading an authoritarian regime in Florida.

While the bill is framed as protecting parental rights in regards to education, the fundamental concept that schools should protect students from topics surrounding the LGBTQ+ community seeks to demonize queer discussions and students as “inappropriate” for a classroom setting.

This legislation, along with the increasing banning of books with queer representation, deliver chilling deja vu of the sexualization and antagonization of queer people, particularly queer men, during the AIDS epidemic in the 1980s. Queerness was treated as a disease, promoting ostracization for fear of getting too close.

The bill continues this stigma, latching onto these age-old, grotesque apprehensions of queer people. Rather than deal with the harsh realities facing LGBTQ+ students in Florida schools, the legislature found it easier to silence them.

Not only is silencing the queer experience in schools deplorable, it is also downright dangerous. There is a reason that 40% of the youth homeless population is LGBTQ. Queer youth are often driven out of their homes for their sexualities. For many students, school can serve as a safe haven as the only place they can be open about their identity due to an unaccepting environment at home.

Abuses requiring queer students to silence their struggles are especially harmful, considering their disproportionate risk of suicide and mental illness.

DeSantis is waging a war against demographics that threaten his grip on power, and queer students are continually caught in the crossfire. It seems like the walls of his authoritarianism are closing in. It is not only invading our classrooms, but potentially infiltrating our homes.

It is easy to feel defeated. To grieve. To worry about what this means for you and your queer peers. But now is not the time to wave the white flag. It is time, however, to make a lot of noise.

As I write this, my hands shake with equal parts anger and fear. But just as these emotions mobilize me to write, it should mobilize you to act.

Young people are continuously told that their voices don’t matter. As a minor, I have often felt helpless in fighting for policy that I am truly passionate about in a sphere dominated by older men. It’s hard to speak up when you have been shown time and time again that there are always people who can speak louder.

But student voices have become pivotal to widescale reform. It was the students who had first-hand experience with gun violence that pushed for meaningful gun control laws and school safety acts to pass. It was student protests, walkouts, and petitions that got national media attention. Student voices have power, and it is time to use it.

Petitions are a great symbolic gesture, but with a government concerned so little with the public’s opinion, our fight will need more. Message lawmakers directly, and attend peaceful protests. If there are none in your area, be the first to organize one.

But most importantly, do not be silent. Even if you are not old enough to vote, be vocal in your support of politicians who oppose these policies. Inform and expose these abuses to your peers. We are the constituents of the future, and we need to show lawmakers that our voice matters.

After continuous abuses, we do not owe lawmakers our kindness nor our compliance, but we all owe the queer community our advocacy.