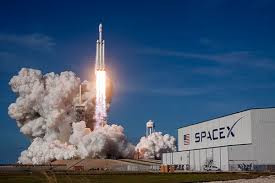 Elon Musk’s company, SpaceX, launched their next generation rocket, the Falcon Heavy, in February of this year. This shocked the world and showed that private companies possess the ability to hold their own in the space exploration industry while also making a profit. However, this raises a question: Is the private space industry the future? Or, is NASA still the only way forward?

We have already seen SpaceX innovate and advance space travel. SpaceX stunned the world in 2017 by performing the first ever rocket landing, thus showing the potential of reusable rockets, according to Space.com, a website dedicated to space exploration.

This, along with many other launches of satellites and rocket models, has illustrated the potential for private companies. GeekWire explained that companies such as SpaceX and Blue Origins, a privately owned aerospace manufacturer and spaceflight service, will be the first to send a manned mission to Mars based on the progress they have made already.

Where does NASA stand in all of this? Well, not exactly in the best position.

Sure, we have seen NASA perform incredible feats of engineering and science, such as the Apollo program and the space shuttles, but it seems that their time in the sun is over.

Since the end of 2011, NASA has not been able to send any payload into space without use of Russian rockets launched out of Kazakhstan, according to National Geographic. NASA’s dependency shows it diminishing relevance, and the only way for it to rebolster is if the president cares about space exploration.

The Trump Administration has said that it will establish a new space agency, the Space Force, according to CNET. This program could light the spark that NASA has been waiting for and cause a new wave of funding to hit the organization, which would allow them to continue their unfinished projects.

In the end, we really don’t know who is going to get to Mars first or even if it will be the Americans who are the first to step on Martian soil. If privately-owned companies can keep up the progress that they have made thus far, we could see the future of space travel resting in the hands of these companies.