The Confusing Priorities of Feminism 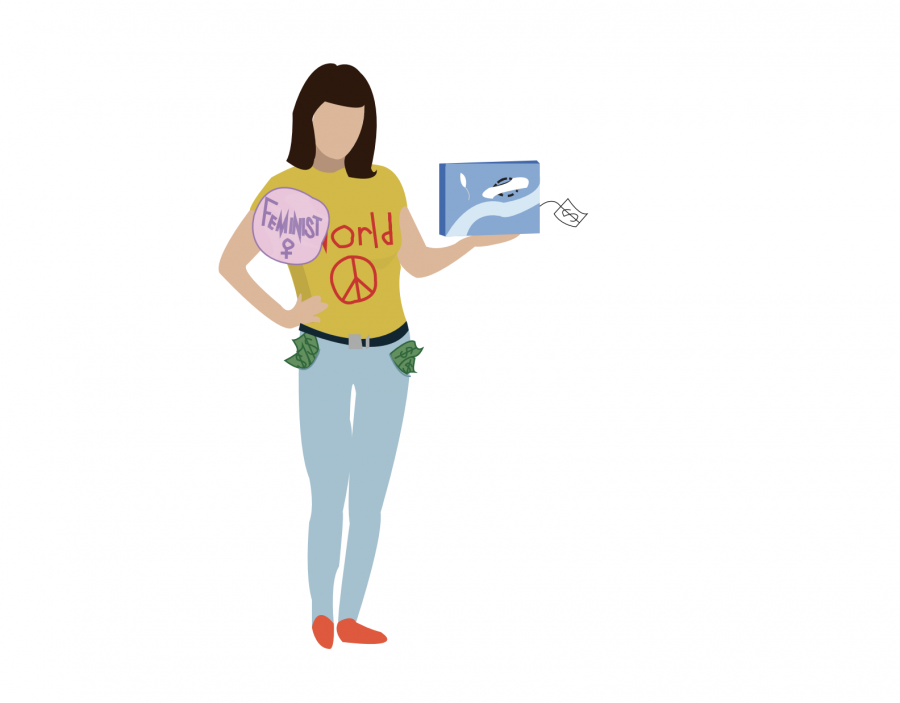 It’s not a surprise that we make the mistake of thinking our needs are the most important and forgetting the needs in third world countries, due to our lifestyle in a country full of opportunity.

People in the United States have taken many things for granted. We obtain items that are less than a week’s worth of pay to us, yet a luxury to women around the world. Women have worked to  spread realization and procure justice around this nation. The feminist movement has expanded greatly, with more than 30 national feminist news and opinion magazines today, and the commonly known trend in most schools of being labeled a “feminist.”

With people sporting t-shirts, buttons, and patches promoting the movement, feminism has spread as a fashion trend while still serving its main purpose of promoting women’s equality. The disadvantage of that, however, is that people begin to label themselves as part of the movement, yet don’t bother educating themselves further than the main message of standing up for women. People often ignore and forget the necessary inclusion of standing up for not only American women, but women around the world. Feminism includes all women – minorities and LGBT members included – which are left out too often.

Women don’t only exist in the privileged manner seen most often in the United States. Women worldwide struggle to be healthy, clean, and even respected. Therefore, the greatest issues we should focus on are not american feminine hygienic prices.

What we don’t realize enough is that feminine hygienics are manufactured items which are the result of labor that is then structured and sold. Despite fabrication time, they are considered a worldwide luxury. We should fight for the access of proper menstrual care to women who aren’t even socially accepted and shunned when they’re on their period. We’re standing up for women around the world, we shouldn’t be crying about the prices that are rather affordable.

Some women have to sleep with men for financial benefits, regarding the purchase of menstrual products. According to a study done in Mukuru, Nairobi, girls engage in prostitution at astoundingly early ages, beginning at 10 years old. This is in effort to afford feminine hygienics for their future, which consist of, but are not limited to, tampons, pads, menstrual cups, and cloths.

Using cloth is harmful because they have to constantly be washed, and feminine hygienics are required to be switched, and not worn for any longer than three hours. However, these women across the Western Hemisphere wear cloth all day, for there is no time to wash the cloth and allow it to dry throughout the day, according to Dignity Period. Even then, the drying of cloths take a long time, and they aren’t sanitary when the slightest bit wet or moist, as damp cloths lead to the risk of UTIs for women.

In Nepal, some areas have rejected the idea of a woman’s period as “taboo.” Women in the socially developed areas of Nepal receive more respect and understanding from it. However, that still leaves a numerous amount of areas within that region that haven’t grown from the idea of shunning a woman for it. The social tradition, known as “Chhaupadi,” prohibits Hindi women from participating in every-day family activities during their period, because they’re considered “impure.” According to Time’s Magazine, such activities include being inside their own home, touching men, eating nutritious foods (butter, meat, milk, yogurt), using warm blankets, going to school, and taking a bath. Women are forced to eat dry food and live in makeshift huts. This may seem like an ancient practice, but according to The Independent, it still goes on today in western areas of Nepal. Women have died due to this practice and will continue to.

But, we don’t even have to go around the world to see this. According to a report by the National Alliance to End Homelessness, within the United States in 2016, there were 564,708 people that were homeless. Of that population, 206,286 were families, 358,422 were individuals, and a quarter of the whole group were children. Homeless women do not have the money to access feminine hygienics, and according to articles on Bustle and The Sydney Morning Herald, are forced to make their own out of public toilet paper, fabric from their clothes, or other things they can find.

Despite those who are homeless, feminine hygienics aren’t even provided to those on welfare. These products aren’t seen as a necessity to those who cannot afford such items.

Rather than thinking about women worldwide, homeless women, and those on welfare, we’re trying to find a solution to remove the tax on the items for ourselves. It’s important to remove the tax, or even lower the prices, on these items. However, it shouldn’t be a priority.

It’s far more important to prioritize those who can’t afford these products at any cost before we start to protest for the benefit of those who can. In New York, the tax on period products, including panty liners and period underwear, was removed on Sep. 1, 2016. This is something for women to celebrate. Maryland, Massachusetts, Minnesota, New Jersey, and Pennsylvania exempted menstrual products as well. Regardless, this is a great advancement for feminists. But, the effort feminists put into acts like this should be dispersed and prioritized for help to women worldwide, the necessity for those on welfare, and lowering the prices to help the homeless.

Goals can be achieved with the voice women have when united towards the same goal. We can begin by finding ways to provide items such as menstrual cups to women in other countries. Otherwise, we can work on technology to dry the cloths they use, which should be accessible at all times in any condition. Within our own country, we can provide the accessibility to feminine hygienics in public areas for the homeless, in the same way we provide public toilet paper to all people with no payment required. And, if we can fight for the tax removal on these products, we should be able to add the importance of providing feminine hygienics to the women and families on welfare.

Women united are very powerful; but the power begins with the health of every individual.