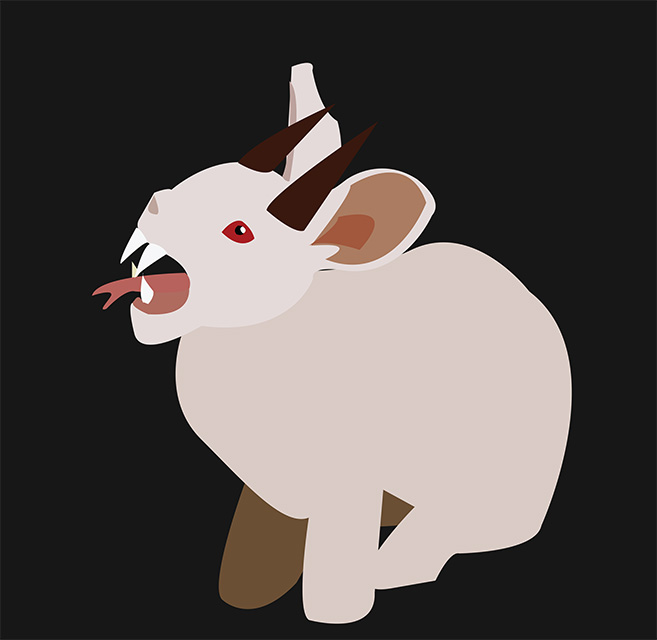 The Leporidae family is no laughing matter, although many would consider it as such. Truthfully, many people would smile upon seeing a member. And a small group of audacious folks has dared to own one. Taking a step back from lunacy, I am here to bring awareness to the dangerous and grotesque reality that is rabbits. These adorable creatures are ravenous consumers of greenery, taking it upon themselves to devour any shrub, grass, or plant that enters their line of sight. Locking on to their meal, they pounce suddenly, without warning. Before you know it, the helpless plant is torn into pieces and taken away from the life it so peacefully lived (That is, before coming into contact with its fluffy nightmare).

The danger rabbits impose on our ecosystem is overlooked by many because of their large eyes, stubby tails, and button nose. I sat down with communications junior Ian Gonzalez to get a feel for just how severe this epidemic is.

“I used to want a pet rabbit until I realized how big of a responsibility it is,” Gonzalez said. “They poop a ton, and cleaning the cage is a huge pain. They’re so cute, but there was no way my mom was going to let me have one. I gave up on that dream pretty quickly.”

The concern I had was validated by Gonzalez’s remarks. He failed to show any concern of the pressing matter at hand. Additionally, in an extremely scientific poll of my Facebook friends, participants were shown a picture of a bunny and asked, “Do you think rabbits are cute?” The results are shocking: everyone thinks rabbits are cute. It is nearly impossible for one who knows the truth to still think these beasts are adorable. I find the interview and Facebook survey to be conclusive of one thing and one thing only: something so widespread and pervasive, yet so unknown; something I like to call Cottontail Fever.

According to The Department of the Environment and Energy’s website, “Grazing and burrowing by rabbits can cause serious erosion problems, reduce recruitment and survival of native plants, and modify entire landscapes.” Not so funny anymore. The threat should be obvious now. In fact, the other side of the planet is already feeling the effects of letting this pest graze freely. Australians are living with the consequences of exploding rabbit populations every day. Pestsmart.org says, “The overall loss caused by rabbits to agriculture and horticulture in Australia was recently estimated to be about $206 million per year.”  It’s only a matter of time before the rabbits hop on over to our country and ravage on our terrain. Soon, the land of the free and home of the the brave will be sapped and taken advantage of by these deceptive little furries.

Cottontail Fever is here. It’s climbing in your windows and snatching your people up. If left uninterrupted, the manifestation of this disease could never end. The Leporidae family could arrive any day, destroy the land we love, and escape the scene of the crime while we were busy batting our eyelashes at the allegedly cute and fluffy animals. As Margaret Atwood once said, “Stupidity is the same as evil if you judge by the results.” Our naiveté could have the same detrimental impacts as the rodents we ought to fear if the recognition of the problem never exists in the first place.