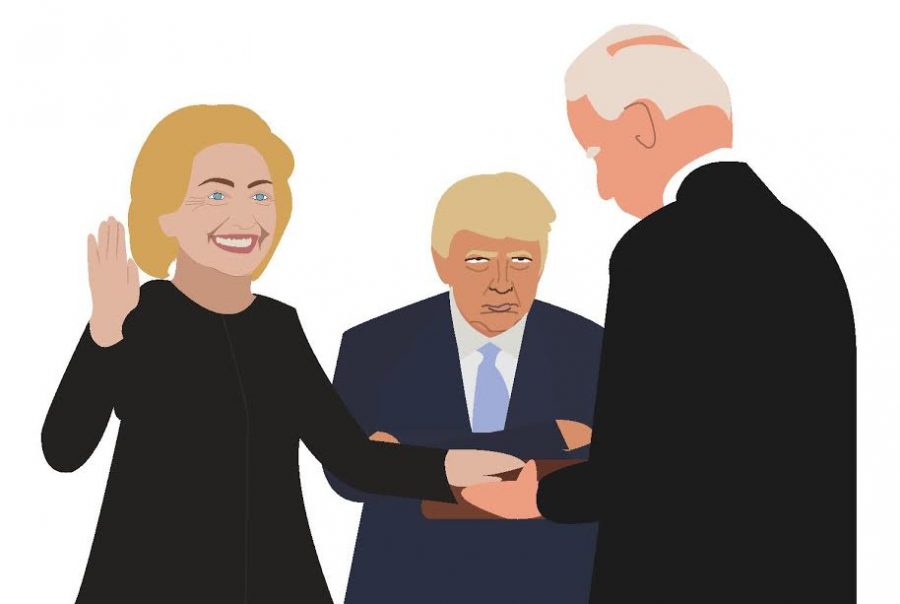 Election Day is drawing in as the country decides whether they’ll be voting for Hillary Clinton, Donald Trump, or, in a few cases, a third-party candidate. The presidential debates for this round of elections has finally come to an end with the third presidential debate on Wednesday, Oct. 19 at the University of Nevada in Las Vegas, Nev. The moderator was Chris Wallace, an anchor from Fox News, who asked each candidate a question about a topic, gave each candidate a two-minute talking limit, and guided the discussion into deeper conversations.

The debate began with a few tricky social questions about the Supreme Court, immigration, and abortion. Trump and Clinton’s views were, for the most part, polar opposites. Regarding abortion, Clinton reinforced her pro-choice stance by referring to the Supreme Court case of Roe v. Wade, stating that “there can be regulations on abortion so long as the life and the health of the mother are taken into account,” and that “I will defend Roe v. Wade and I will defend women’s rights to make their own healthcare decisions. We have come too far to have that turn back now.” Meanwhile, Trump, who has a pro-life stance regarding abortion, frankly said that “nobody has business [getting an abortion].” Trump and Clinton also clashed on the issue of gun control, when Trump insisted that implementing any new forms of gun control would violate the Second Amendment (the right to bear arms); Clinton promised to increase gun control while ensuring that the Second Amendment stays in place, “I understand and respect the tradition of gun ownership that goes back to the founding of our country, but I also believe that there can be- and must be- reasonable regulation. Because I support the Second Amendment doesn’t mean that I want people who shouldn’t have guns to be able to threaten you, kill you or members of your family.” This was a strong point for Clinton.

After a few hot topics were covered, the presidential debate quickly turned into a more personal one as Trump and Clinton started making some personal lashes at each other. When discussing immigration and border laws, Trump accused Clinton of simply “granting amnesty” to absolutely anyone who wants to come into the U.S. Clinton responded by subtly changing the topic of the conversation to the rumors many rumors swirling around regarding Trump. Among these, Clinton pointed out that Trump may have some connections to Vladimir Putin, the president of Russia. There have been rumors that Russia is attempting to influence the U.S. elections in favor of Trump, which Clinton claimed to be true by stating that Putin wants a “puppet in the White House.” Trump immediately and angrily shut down the idea that he could be connected to Putin and pettily responded to Clinton, “No, you’re the puppet,” making a clear attempt to get a rise out of Clinton. However, she held her ground and Wallace guided the conversation back to immigration once he had realized how out of hand the debate had gotten.

The next section of the debate was about the economy. Regardless of either candidate’s plans, it was very obvious that Trump was childishly ripping down anything Clinton stood for. For instance, he started his argument by saying, “First of all, before I start on my plan, her plan is going to raise taxes and even double your taxes. Her tax plan is a disaster.” The problem with Trump is that each time he takes a direct rip at Clinton, it hurts his image instead of helping it. Instead of using his time to explain his stance and how he wants to actually “make America great again,” he uses his time trying to demonize Clinton. Clinton is not perfect herself, for she also makes too many jabs at Trump. However, the difference is in the delivery of those jabs. Clinton tries to remain civil and clearly focuses her on presidential priorities. Clinton spends more time delivering her message of hope to Americans than attacking Trump.

When Trump was once again addressed about the way he treats women, he stuffily attempted to reassure that “nobody treats women better than I do.” However, several minutes later into a different topic, Trump proceeds to unshockingly call Clinton a “nasty woman,” simply disproving the statement he originally tried to make.

Toward the end of the debate, Trump was clearly getting insecure. He claimed that everything is rigged against him: the media, the election, and even the Emmy Awards (in regards to his former television show, “The Celebrity Apprentice”). Trump’s pettiness and childish behavior continued. At this point, we will be voting in the first female president of the United States on Nov. 8.