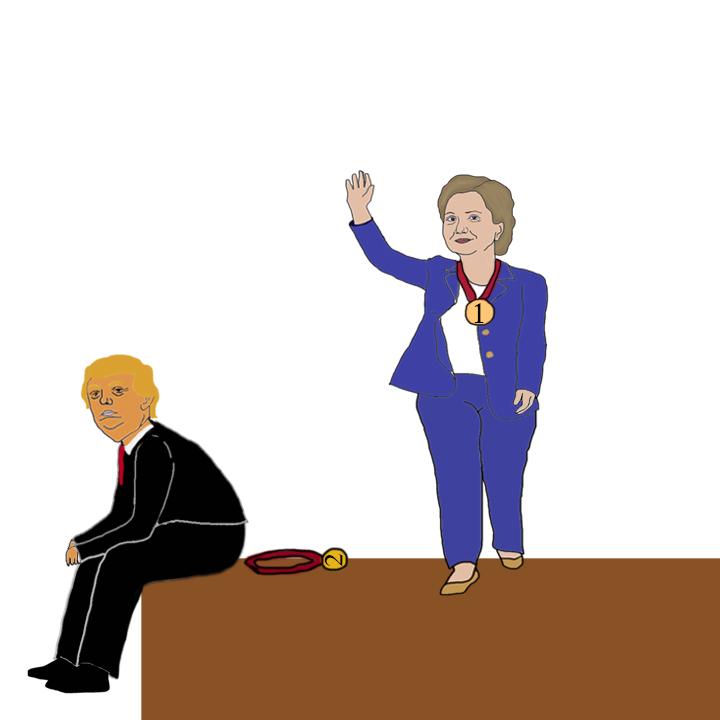 It was clear that the second presidential debate would be one filled with tension and pettiness when the two presidential nominees did not shake hands with each other. On Oct. 9, the debate commenced when Hillary Clinton and Donald Trump stepped out onto the stage at Washington University in St. Louis, MO.

The event was moderated by Anderson Cooper from CNN and Martha Raddatz from ABC. Both moderators were required to remain unbiased and not address any pre-existing political affiliations they had. However, throughout the entire debate both Cooper and Raddatz showed extreme distaste for Trump. Trump went over time during his argument, they immediately cut him off; if Clinton went over time, she seemed to get some more leeway. Even though Cooper and Raddatz seemed to subtly favor Clinton, in most cases they rightfully condemned Trump’s behavior and ridiculous responses.

During the debate, Trump went off topic often. For instance, Trump’s new scandal was an important topic of conversation; a tape from 10 years ago was released in which Trump made some negative and uncomfortable comments about women, and insinuated that due to his fame and power, he had the ability to sexually assault women and get away with it. Cooper addressed the situation and asked Trump, “Are you modeling positive and appropriate behavior for today’s youth? […] You bragged that you have sexually assaulted women. Do you understand that?” Trump admitted that he did say the uncomfortable comments, but dismissed it immediately as “locker room talk” and somehow managed to change the topic to talk about ISIS and immigration.

One of Clinton’s scandals was also addressed during the debate. In the past, Clinton had mishandled 33,000 emails, some of which supposedly contained classified material. Raddatz asked Clinton on the situation, “You don’t call that extremely careless?” Just like Trump did regarding his scandal, Clinton confirmed that she did mishandle the emails and takes responsibility for her actions. However, unlike Trump, she apologized to the public and claimed that she would never make a careless mistake like that ever again. Trump clearly thought that Clinton’s words were both empty promises and more proof that she should not be president. When he joined into the conversation, he ended up threatening Clinton, saying that if he ended up being elected, he would hire a prosecutor to review Clinton’s claim again and open up another investigation of her email scandal so that he can throw her in jail. For a man hoping to obtain the presidency in the next month, his behavior is certainly uncivil.

The debate covered a variety of topics such as healthcare, foreign policy, immigration, the crisis in Syria, and tax plans. Clinton and Trump both simply stated the points on their platforms for each topic as the debate went along, seeming to disagree on almost everything. There were some touchy subjects discussed, such as the treatment of American Muslims in an Islamophobic world. Both candidates made strong cases about inclusion and equality under their respective presidencies (regardless of the fact that both of them, especially Trump, have been labeled anti-equality for different reasons in the past).

One of the final questions of the debate was asked by a citizen sitting in the town hall. Each candidate was asked to name something they admire about their opponent. This was important because both the entire night and the entire election process so far has been one filled with tension between the nominees. The succeeding conversation was the most civil one of the entire debate. Clinton went first, stating that she did not like anything that Trump stood for, but admired Trump’s family and the way he had raised his children. Trump thanked Clinton for her comment, and said that, while he does not agree with any of her values either, Trump believes that it is admirable that Clinton always puts up a good fight and does not give up.

Election day is less than a month away, and there is one more debate to follow. When all was said and done, just like the first presidential debate, Clinton won. However, it was a close call. The debates make or break the results of the election and give undecided voters a chance to see which nominee will make the best president for at least the next four years. Clinton will need to continue to keep her game up if she wants to win, and Trump will have to step it up a bit more and control his clear urges to say the unnecessary.