Once Upon A Time In … West Palm Beach

Ticket holders, guests, and chaperones were gathered at the Palm Beach County Convention Center on April 23 to experience a little magic at the fairytale-themed prom 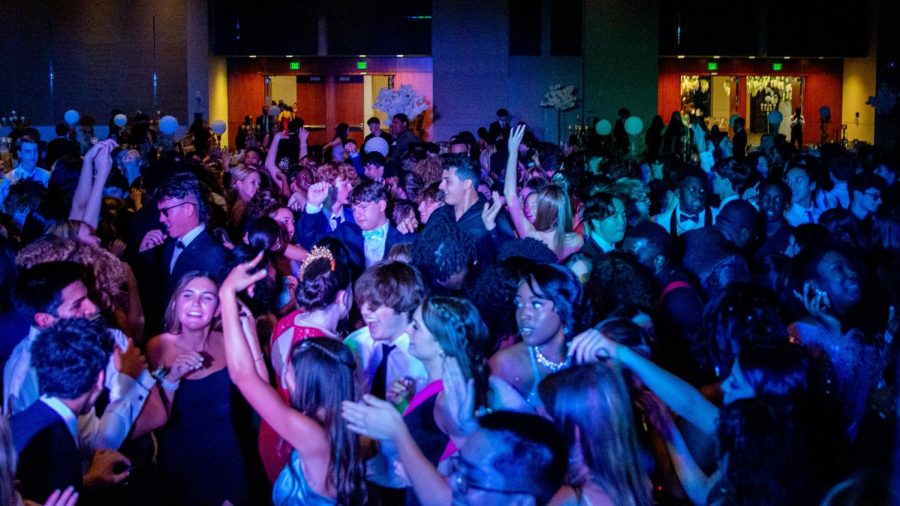 Students celebrate on the dance floor at the school’s first prom in two years.

A word was used incorrectly in the caption “Communications senior Kaja Andric smiles after being crowned prom queen.” The word “queen” has been changed to the correct term “royalty.”

A caption attribution to a photographer stated “Caitlin villacrusis.” The last name has been capitalized.

Much like teenagers, prom has gone through its phases. Nevertheless, it remains a high school tradition. Fashions and themes have morphed over the years, but some timeless rituals remain.

Preparations for prom have not evolved much and began at different hours for different students. Some woke up at 7 a.m. Others, like theatre junior Amberly Rodriguez, woke up at 12 p.m., after what she described as “the best nap of (her) life.”

Most followed the “standard” prom procedure: hair, makeup, pictures outside. Even Principal Blake Bennett had a classic prom experience while getting ready with her husband.

“My mom and dad were over and they actually took pictures of us as we were getting ready for the prom,” Mrs. Bennett said.

The prom-goers weren’t the only ones getting ready. The sophomore and junior class councils arrived at 9 a.m. and got to work in order to bring the venue — the Palm Beach County Convention Center — to life.

“It was not as stressful as I thought it would be,” dance junior Gabrielle Kiminyo said. “We were working together a lot. It was a lot of fun to see it all come together and seeing it filled with people now.”

Magnet coordinator Georgia Mounce told a different story. “Stressful,” she said about the process. “There was an immense amount of stress trying to plan a prom after not having one for the past two years and factoring in inflation.”

While setting up for an event of this scale can be stressful, Kiminyo and Ms. Mounce agreed that it was worth it in the end.

“Everything that could have gone wrong did during the whole process,” Ms. Mounce said. “I feel relieved now that everything is over and came together just as we had envisioned.”

The first recorded proms are found in yearbooks from the 1930s and ‘40s, but they were actually held as early as the 1890s. Proms started taking shape and reflecting the events that we have today during the 1950s (think “Grease”) and have continued to evolve since then. In particular, co-ed interaction isn’t stressed as much today as it once was.

As the Prom Guide states, “More and more girls are choosing their own dates for the prom and more and more guys are going ‘stag’ or with a group of friends. Prom is often still the main social event of the high school season, but it is also a time for fun and the creation of memories for everyone to enjoy.”

Students’ comments reflect this. While there is an undercurrent of finality, the overwhelming feelings that come with prom are generally excitement. Mostly over getting to spend time with friends, share in a common experience, and, as communications senior Penelope Ryan said, “dancing and seeing your teachers dance.”

“I think it’s a rite of passage everyone goes through on their way to college,” piano senior Ethan Zhu said. “It’s the centerpiece of your experience in high school. It’s important that everybody at least gets to experience it.”

Similarly, Mrs. Bennett explains that prom “is an important tradition because it culminates, for juniors, the end of junior year before you officially become seniors, and for seniors, it’s really their last hurrah together. This is your last dance. Your last time where all your friends are together in high school.”

Prom’s continued existence is a testament to its significance in the lives of high schoolers. It’s a sendoff for seniors, an initiation for juniors, and, as Mrs. Bennett put it, “It’s a special memory that most people think back upon fondly.”