Seeking out the Right School

College Fair: an event that prompts questions, decisions, and preparation. 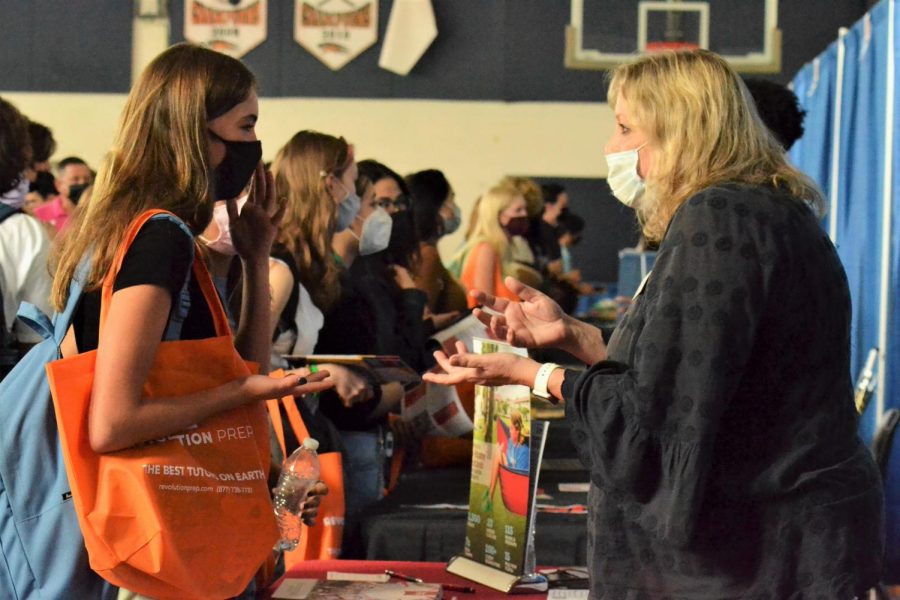 Searching for her future school, digital sophomore Alice Mackenzie talks with a college representative while other students gather alongside her at different booths. At the annual College Fair, students had the opportunity to interact with representatives from over 80 schools nationwide. They had time to ask questions and exchange contact information to learn more about colleges they are interested in.

Eyeing the row of tables, students took out notebooks and pens, pages filled with questions and quickly-jotted bullet points. Students explored the setup as they carried bags filled with college pamphlets and papers at the annual College Fair, which took place on Oct. 8 from 4 p.m. to 6 p.m. in the gym and media center.

Prior to COVID-19, the College Fair included 140 schools, while this year it held 80 due to COVID-19 restrictions. Now that the school was able to hold a College Fair in person, students of all grade levels and their parents came to explore the different colleges that attended this year. Among the colleges that attended, schools included Florida state schools, music and art schools, and technology schools.

Some students, like communications senior Yasmin Ali, were presented with a slew of new possibilities, as it was her first time coming to such a large college-related event.

“I don’t really know how these things really go,” Ali said. “I didn’t go to it in my junior year or sophomore year, so this is my first College Fair, but I was excited to talk to people from the colleges. I’ve done virtual meetings and virtual seminars with the college admissions officers,  but it was never the same interactive level.”

Other students, such as vocal senior Cameron Martin, were able to develop an idea of what they were looking for in a prospective college through inquiring about majors, programs, campus life.

“I’m currently refining my college list, and making sure that all the colleges on my list are a great fit for me,” Martin said. “Location was a big thing for me. I limited my location to the northeast area. I personally want to get out of Florida, but also, the student body is important to me.”

Despite the College Fair serving as an event more directed for upperclassmen, some freshmen saw attending as an early opportunity.

“I wanted to figure out where I want to go because I have no experience with researching colleges or universities,” theatre freshman Micayla Hutchings said. “Since I want to get more into my major, I want to find colleges that connect with my major.”

As students were already excited to attend, others were appreciative of the event’s small scale. Dance senior Samantha Ryecroft said she was  excited that the College Fair was only for Dreyfoos students, as it was a smaller event than bigger College Fairs. “It allows more attention for you to talk to them and for them to take their time with you,” she said.

Although some students were nervous when it came to talking to the college representatives, students became more comfortable as they got a chance to open up about themselves to find colleges that suited their interests.

“I feel more at ease now,” vocal sophomore Brian Trompeter said. “Before, I was scared to go up and talk to people, but now, I feel a lot better about it, and I’m a lot more confident going up to them.”

For years, coordinator Olga Middleton has been trying to be a part of the official College Florida tour, which requires a formal invite. They are the ones who disseminate school information to college representatives around the nation. The PTSO play a large role in organizing the event, as a database is built and a massive invite is sent to colleges to inform them about the school’s planned event date and encourage colleges to attend

“It takes a lot of legwork from the front end to be able to put something of that magnitude here,” Ms. Middleton said. “We had a few cancellations, including Julliard, who loves to come, but because our cases were so high in Florida, and a lot of Northern schools decided that the reps were gonna be traveling to Florida this year, some schools are not traveling until this spring.”

Like other students, vocal junior Saedi Superficial went to the College Fair to get an overall idea of what colleges she would want to attend.

“It’s my junior year, so obviously I need to start thinking about applications and taking scored tests,” Superficial said. “I think going to the College Fair is a great opportunity for me to scout out what colleges would best fit me.”