Audiences Are Permitted at Sports Games, but not at Concerts 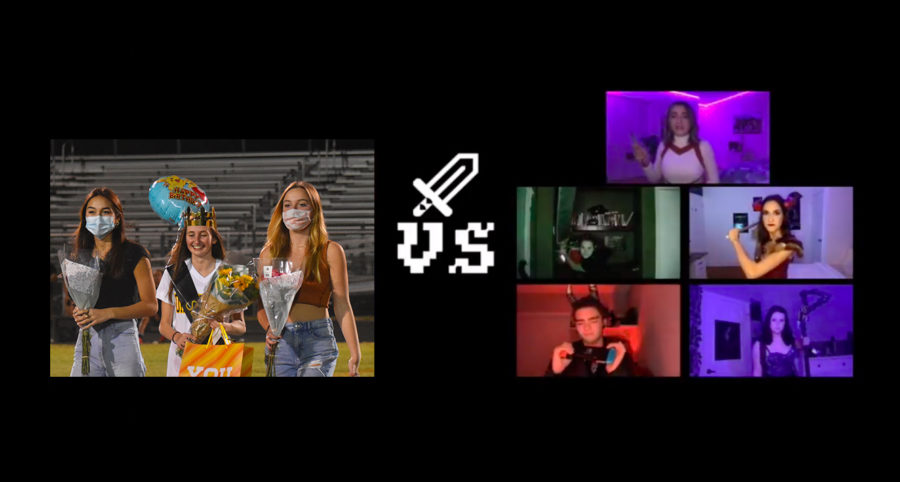 On the left, the girls soccer team celebrates Senior Night with a small audience of parents and friends. On the right, the theater show She Kills Monsters is being performed on Zoom. Lighting and other post-production additions energize the online performance. Photos by Bridget Frawley and Isabella Johnson.

14 months ago, hundreds of students heard the once familiar words, “Please silence your phones, the Prism holiday concert is about to begin.” Today, productions are being watched over phones and computers—and silencing one’s cell phone is no longer a desirable policy.

When, if at all, audiences should be permitted at performances and sports games is an issue decided upon by school board members. They are asking a question students have heard many times during the past year – should protecting public health be prioritized over returning to normal life?

At school, crowds can gather at both indoor and outdoor sports games as long as they stay six feet apart and wear masks.

However, theatre senior and volleyball player Isabella Betz explained that at her games, those guidelines were sometimes broken by students from other schools.
“All of the parents and guests from our school wore masks and were socially distanced,” Betz said. “I can’t say the same about the other teams.”

Still, Betz believes that audiences are a crucial part of volleyball matches.

“I think that [the audience] should be required to wear masks and socially distance, but I don’t think that sports are the same without an audience cheering on the players,” Betz said. “As long as we are being safe about it, I don’t see a problem.”

Track Coach Ross Venning agrees that audiences should be allowed at games.

“They can space people out and limit the number of fans, and people are responsible enough to wear their masks,” Venning said. “If the NFL, NBA, and MLB are allowing fans and have guidelines in place, then why can’t high school?”

At concerts on the other hand, there’s no opportunity to break social distancing rules because audiences are not permitted.

“Socially distanced shows could be a possibility,” dance freshman Savannah Ehrlich said. “My studio just did a show with not many people, but it did work. It is so saddening that my first shows at Dreyfoos may not happen.”

Despite the challenge of performing online, students are doing their best to adapt and engage their audiences.

In the production She Kills Monsters, that adaptation meant adding virtual effects like chimes and digital drawings, as well as requiring students to use headphones to drown out sounds like dogs barking.

“Getting involved with our audience was really challenging because it was a pre-filmed show,” theatre senior Miranda Faria said. “But it was live streamed on YouTube so people could comment as the show went along, which was fun to watch people [react]. Outside the livestreams, we used Instagram takeovers to show sneak peaks of the filming process which included Q&As where they could ask us anything about the show. That part was really fun because [we were able to] do more virtual engagement throughout the rehearsal process to promote the show and showcase more than just the final product, which I really love.”