BEHIND THE SCENES OF THE HARVEST 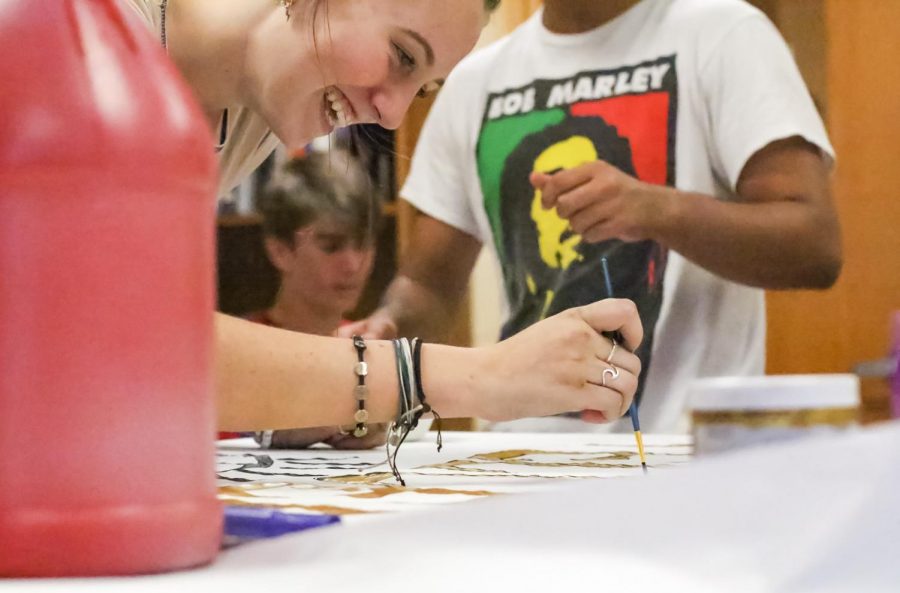 Communications junior Lucy Steigenga paints a sign for the haunted house while staying after school on Oct. 14. The theme revolves around humans in animal masks harvesting organs from other humans, thus inspiring the name The Harvest.

For the past two weeks, the boys and girls locker rooms have slowly been transforming into a haunted barn. This year’s Fall Dance, named The Harvest, will take place on Oct. 17. Coordinated by SGA, the dance will have a DJ, live music, a haunted house, food, and more. Though most people only see the final product, SGA officers and volunteers put in unrecognized time and effort to pull the dance together.

The concept of a fall dance came to fruition after the homecoming dance began to lose its popularity in 2016 and “nobody really went,” said Arman Khoshbin, SGA Co-Corresponding Secretary and vocal junior. This is the second year the Fall Dance is being held, and SGA hopes to make it an annual tradition.

“I don’t think students want a homecoming where people get dressed up in formal attire for no reason and just stand around,” Khoshbin said. “It’s important to us to have some sort of dance that fills in the spot of homecoming—something that kids will be excited to go to. I don’t really know a lot of other schools that [have a Fall Dance] and make a haunted house and everything.”

SGA members announced the Fall Dance with a debut post of the theme on their Instagram on Sept. 16. Hoping to add a mysterious element to the dance, SGA continued to post photos and video, created by SGA Co-Historians, communications junior Adam Goldstick and communications sophomore Allison Robbert. The video trailer garnered more than 1,400 views.

“I think that we were trying to make it more mysterious so that people would inquire [about the theme] and ask about it and start talking about it,” SGA sponsor Sarah Garcia said. “The videos that Adam and Allison made really got students intrigued on what was happening and kind of played into that whole horror and mystery.”

SGA Co-President and digital media senior Kristina Ronan “was the one who made the design of how the walls were going to look,” while SGA Co-President and communications senior Sebastian Fernandez “was more on the technical side,” according to Ms. Garcia. In order to make the haunted house come to life, the group created a blueprint, broke the house up into sections, and put up tarps to serve as faux walls.

After developing the theme, creating a marketing strategy, and formulating the logistics, SGA moved their meetings from the Media Center to the gym and began setting it up for the dance with some additional help.

“We’re doing a lot better with coming up with strategies to make things go a lot faster,” SGA Co-Recording Secretary and communications senior Faith Tirtarahardja said. “This year, SGA has [National Honor Society] and [National Art Honor Society] volunteers helping as well. We’re a lot more organized this year, and everyone was split up into sections with a partner.”

Using feedback from last year, SGA also made numerous changes to this year’s dance, including adding live music and a magic show. Two bands —Watching Paint Dry and Dreyfoos Fusion— are made up of current students and will be the live music for the night, with theatre senior Justin Strikowski performing as the magician. The haunted house was also expanded across two locker rooms this year rather than just one.

“Last year, we realized that everyone really just wanted to go in the haunted house, but while they were waiting in the line, they were bored and not doing anything,” Ronan said. “So, we added live music outside this year.”

Members of SGA came to school on weekdays during which school was not taking place, as well as on Saturdays. Many officers believe that students “don’t really realize how much SGA tries to do for the student population,” according to Ronan.

“There’s a lot of hard work that goes into this and the fact that it is only $10—I think a lot of people should be attending,” Ms. Garcia said. “We have a lot of tickets sold already—almost over 300 tickets. It’s definitely going to be a lot of fun.”

Tickets to the Fall Dance are $10. Click here, see an SGA officer, or find Ms. Garcia in the Media Center to purchase yours.