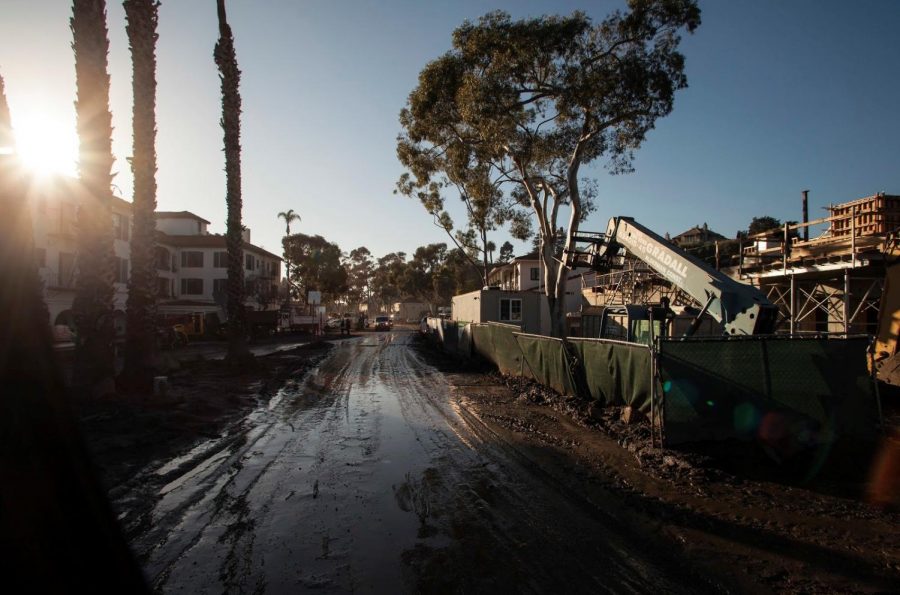 Mud covers roadways in Montecito, California, Jan. 11, following a mudslide earlier in the week. Deep mud has left some areas cut off from critical services, and residents who sheltered in place during a storm earlier in the week need to leave their homes. California National Guard high water vehicles helped transport residents from neighborhoods that are cut off to a centralized drop-off point where they can be picked up or taken to an evacuation center.

California is Hit with Another Natural Disaster

Rainstorms hit the wildfire-charred Southern California hills on Tuesday, leading to mudslides that killed 20 people and destroyed dozens of homes. Officials say 43 individuals are still missing, and search efforts following these mudslides will enter an eighth day on Tuesday, with more than 1,250 rescuers on site. The Thomas Fire – the largest wildfire in California history – burned more than 281,000 acres of land and vegetation leaving the area especially susceptible to dangers associated with the inclement weather. Randall Jibson, a research geologist with the U.S. Geological Survey, said that communities below the scarred land could remain vulnerable to mudslides for years due to the fire.

On Saturday, an emergency alert notification was sent out to Hawaiian citizens warning them of a “ballistic missile threat inbound to Hawaii.” The warning went out on cell phones, televisions, and radios at  8:07 a.m. (HST).

“BALLISTIC MISSILE THREAT INBOUND TO HAWAII. SEEK IMMEDIATE SHELTER. THIS IS NOT A DRILL,” the alert read.

Following the warning, the Hawaii Emergency Management Agency (EMA) tweeted that there was “NO missile threat” to Hawaii, but the message did not reach those who do not follow the account. Thirty-eight minutes after the first warning, Hawaii’s EMA sent an alert to mobile devices across all islands informing residents that the first alert was a false alarm. On Sunday morning, officials confirmed that the message was sent out as a result of an employee pushing the wrong button. Rather than triggering a test of the system, the employee activated “event mode.”

The Trump administration resumed receiving renewal applications for the Deferred Action for Childhood Arrivals (DACA) program as a result of a federal court order. Moving forward, the U.S. Citizenship and Immigration Services will not be processing applications for individuals who have never before received DACA protections. Earlier in the week, President Donald Trump hosted a bipartisan discussion for immigration reform, which froze after he allegedly referred to Haiti and certain African nations as “shithole countries,” asking why the U.S. does not have more immigrants coming from countries such as Norway. He has since denied the comments and blamed Democrats for the stall in talks for a bipartisan solution regarding the future of DACA.

DACA is probably dead because the Democrats don’t really want it, they just want to talk and take desperately needed money away from our Military.