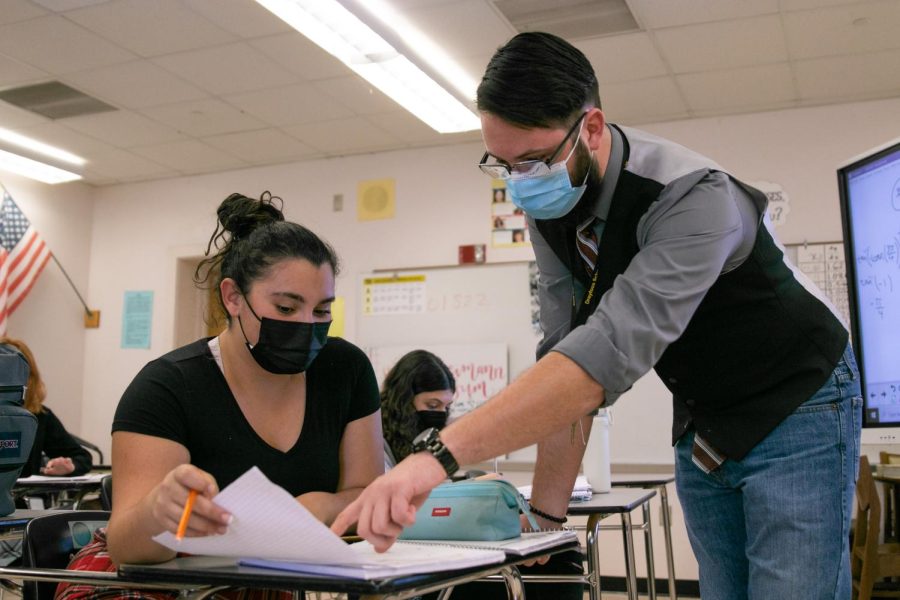 New math teacher Timothy Freeman helps band sophomore Gianna “Gigi” Mendelson with homework problems at the end of his fifth period precalculus class. Her classmate, band sophomore Ryan Brown, believes Mr. Freeman’s spontaneous style of teaching better “accommodates the needs of the class” by going at the pace of the class. “If you have a more rigid system, you can’t be that flexible,” Brown said. “You can’t be that adaptable.”

“Math teachers have to be both sadists and masochists.”

This wasn’t your typical perspective for a precalculus class: Math teacher Timothy Freeman, equipped in one of his hallmark vests and ties — a style he describes as “pseudo-business casual” — walked to the SMART Board and began teaching a class he had grown to know over the course of the past three months.

Since November 2021, Mr. Freeman has taken on precalculus and AP Calculus BC classes, learning the campus culture as he goes.

“The atmosphere, the hype, which was lived up to, was really what helped with the transition,” Mr. Freeman said. “The focus on actually doing your academics as students is really what has helped make it such a smooth and easy transition.”

Mr. Freeman began his career in mathematics serving as a graduate assistant in Florida Atlantic University’s Master’s Program. After serving as a substitute teacher for both precalculus and AP Calculus BC classes in November, he took a permanent high school position.

“I haven’t faced as big of a struggle as most people would anticipate in high school because it is Dreyfoos,” Mr. Freeman said. “Most of the students here, both from what I’ve been told and from what I’ve seen, tend to pay attention.”

Mr. Freeman seeks to bring stability to student learning and offer the same level of energy he exhibited from his earliest days of teaching in his new position.

“I remembered all the teaching, all the experience, and all the fun times I had recalled at the college level,” Mr. Freeman said. “I brought that with me walking in, even though I was walking in the middle of November, having no idea what any of the classes were doing or if I was even going to be staying with them for more than a week or two.”

When not on campus, Mr. Freeman codes, games, and writes to help him with his “logical” teaching style. His varied interests contribute to what his students say is his “chill” personality.

“He’s really relatable because you see him humming while he’s writing the math questions down,” vocal junior Gabriela Hernandez said. “He’s not this strict person you can’t mess with.”

Mr. Freeman follows a less rigid structure and a more spontaneous flow to the classroom. He believes the style “always opened up more doors and allowed more thoughts to be expressed.”

“I know what I want to teach,” Mr. Freeman said. “I have everything ready to go, but when it actually comes time to step up from the board in front of the class, it’s more free-form. I allow the class to guide the speed and what we focus on. So even though I teach four classes of Pre-Calculus, each lecture, even though it covers the same material, has its own life from the others.”

“The free-form style appeals to me a lot better as a student because you have more chances to ask questions,” Brown said. “You can change it up as you go to accommodate the needs of the class if there’s only one part that they’re struggling with.”

“They’re more excited about ‘getting (hard concepts)’ than I ever was,” Mr. Freeman said. “It’s that whole recognition that they ‘get it’ no matter what it took. That’s really what it is.”