A “Little Letter” to Officer O 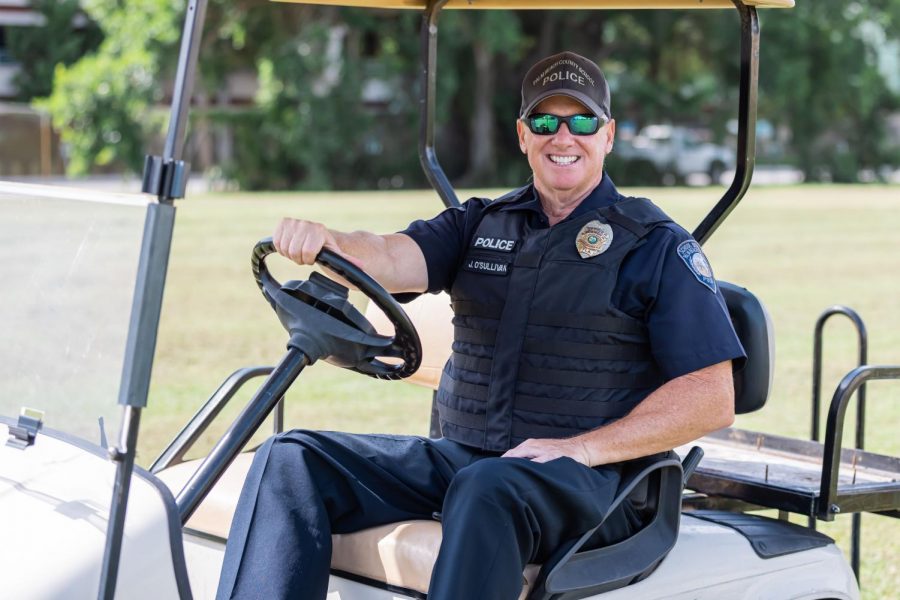 Everyday, Officer O. drives his golf cart around campus to ensure that all entry points are secure and each student feels safe. Part of these rounds include going to the field and cafeteria during lunch to check that everything is running smoothly.

Officer James O’Sullivan, known on campus as Officer O., has seen a lot during his over 21 years of policing. One of the more notable sightings came when Mr. Engstrom called Officer O. to the girl’s bathroom in building 7. Standing in the bathroom was a homeless woman, washing her clothes in the sink.
“She thought there were demons in her clothes,” Officer O. said, laughing. “I hit the demons and got them out.”
However, demons and bathroom sinks are not the usual occurrences Officer O. encounters on the daily. His day-to-day schedule is constantly changing, making the schedule of his routine tasks a mystery.
“I do everything in infrequent and irregular intervals,” Officer O. said. “I don’t try to do anything at the same time or on regular intervals, because then people can watch you and time you. I’m that paranoid New Yorker.”
Officer O. lived in New York for 42 years prior to moving to Florida. He worked with the New York City Police Department for 21 years before doing a crossover class and taking the state police exam to transfer to Florida.
“Every day is a great day. The kids are incredible here, and I like interacting with people,” Officer O. said. “I enjoy looking after you guys … I look forward to coming in, even when it’s pouring rain; I would cross tri-railers back in the day. I’d be in the rain for 15 minutes, but I still look forward to coming here.”
To be recruited for the New York City Police Department, Officer O. attended a six month Police Academy. The academy consisted of physical training, along with law, social science, and police science studies. After his move to Florida, Officer O. had to attend an equally rigorous series of courses and training, including high liability training. Once he passed that exam, Officer O. was finally eligible to take the Florida Police State Exam.
“My favorite part was that I passed the first time, so I didn’t have to study for it again,” Officer O. said. “Sometimes people have to take it over, and then there’s a lot of pressure.”
After he was hired by the Palm Beach County School Police Department, a team of over 200 police officers, Officer O. worked in elementary schools prior to working on our campus. The elementary schools he worked at had a different environment than those of the New York City schools Officer O. was used to.
“All our high schools had metal detectors,” Officer O. said, referring to New York City schools. “We were still taking TEC-9s, cane swords; there was still a lot of weapons in the schools.”
One of Officer O.’s routine tasks is surveying the gates surrounding campus, ensuring they are locked so nobody except students and faculty can enter, or as Officer O. calls it, “keeping the wolves on the outside, and the sheep on the inside.”
“We’re unique,” Officer O. said. “I’m blessed to be here. All the kids play well together; we don’t have fights, we don’t have people really stealing from each other. We might have something where somebody leaves something behind, […] but nobody [is] coming in looking to take anything.”
This school year, Officer O. is not the only police officer patrolling campus each day. He is training new hires and officers from the West Palm Beach Police Department that have been assigned to campus in response to a push for additional safety measures in schools. Among these new officers is Sergeant Daniel Turner.
“I wasn’t sure what I wanted to go to college for,” Sergeant Turner said. “I decided to start taking some criminal justice classes, and I ended up doing an internship at the Hillsborough County Sheriff’s Department. Once I started riding with them [and] seeing what they did, I basically fell in love with it. That was 26 years ago.”
Many of these new officers come from diverse backgrounds — one new hire was a 23 year veteran and a former New York State Trooper for the New York City Police Department before becoming a Florida Trooper. When training, Officer O. evaluates their different skill sets and what areas they need more knowledge in.
“[I train new hires] by trying to address what area of concern they might have,” Officer O. said. “Everything will be a little bit unique. The last guy had been in Florida, so he knew the computer system, so we went over other school things. He wanted to interact [with students] more, because when you’re a Trooper, you don’t interact the same way.”
Recently, there’s been a misconception that Officer O. is training new officers because he is retiring next year. However, Officer O. wants to dismiss those theories and let the student body know that he is here to stay.
“I’m 59, I’ll retire at 62; but I lift weights, I hit a heavy bag, I know I can still do the job. I’m not going anywhere for a while,” he said.
Although Officer O.’s location on campus at a given moment is unpredictable, many students and faculty are familiar with his personable attitude.
“He’s a great person,” vocal junior Mitchell Thai said. “He honestly feels like someone that anyone on campus can talk to about anything and talking to him is really enjoyable since he’s so friendly. He is an irreplaceable part of Dreyfoos, because having random interactions with him throughout the day is a morale boost.”
In return, Officer O. has received tokens of appreciation, such as letters from students, thanking Officer O. for his daily acts of service.
“You’ll get little letters,” Officer O. said when asked what the most rewarding part of his job is. “You’ll get a, ‘Thank you so much for helping me find my phone.’ You guys are so nice and thankful that you’ll write a little note just to show how much it meant. It’s those little things, knowing you made a difference.”