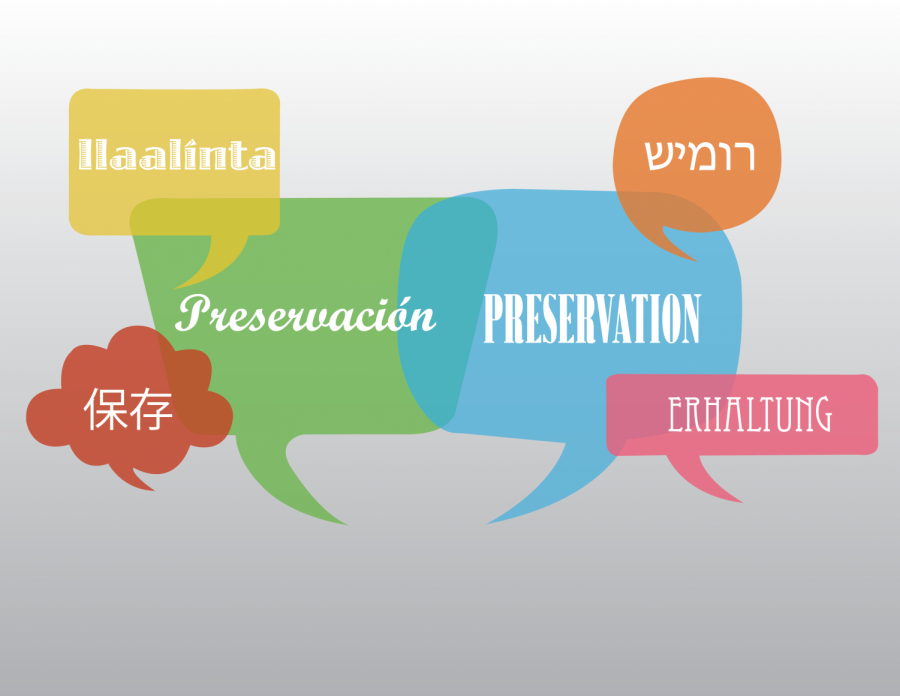 The word ‘Preservation’ (from left to right) in Somali, Hebrew, English, Spanish, Simplified Chinese and German. “It requires a mental discipline to switch and exclusively speak your parents' language when you are with them, and not speak English,” said communications freshman Kaja Andric. Many students at Dreyfoos learned their parents language to preserve their parents culture.

“Sayonara!” piano sophomore Izumi Yasuda said to her parents as she left for school, having learned her parent’s native language. From language, to food, to religion, many students use their culture for self-expression.

“I can talk to a whole new variety of people and have an instant connection to them because of the language we share,” communications sophomore Grace Gosinanont said, who speaks Thai with her parents.

Language may also serve to bridge students’ cultures with an appreciation of their parents’ pasts. Understanding multiple languages, especially those linked to one’s ancestry, frequently helps to foster understanding and empathy.

“Knowing my parents’ language gives me a deeper connection to their culture,” Andric said. “I’m able to communicate with my extended family, and I have friends overseas that I hang out with during summers.”

Equipped with multiple languages, students are able to have more meaningful experiences in other countries.

“I travel to former Yugoslavia every other year,” Andric said. “I think that staying there often gives me the chance to experience the culture on a more personal level. My mom and dad can’t be as sincere and their true selves speaking a second or third language like English.”

For multiple students, this understanding can lead to an entirely different perspective about the origins of their family.

“A lot of Thai culture revolves around being able to interpret the language and being able to speak it,” Gosinanont said. “It gives me the chance to understand the meaning behind each story told to me.”

Many times, a student’s languages can help define their self and their culture, being a combination of their parents language and the English they learned at school.

“I can speak both languages equally, but I think I am culturally closer to Japanese, so it’s always fun to talk about cultural differences with my friends,” Yasuda said.

Because of these benefits, bilingual students encourage others to learn a language from their own history and become familiar to a past.

Gosinanont said, “It’s an experience that will bring you closer to your family and your family’s culture.”