Stephen Spielberg's “West Side Story” takes a different approach than its predecessors. 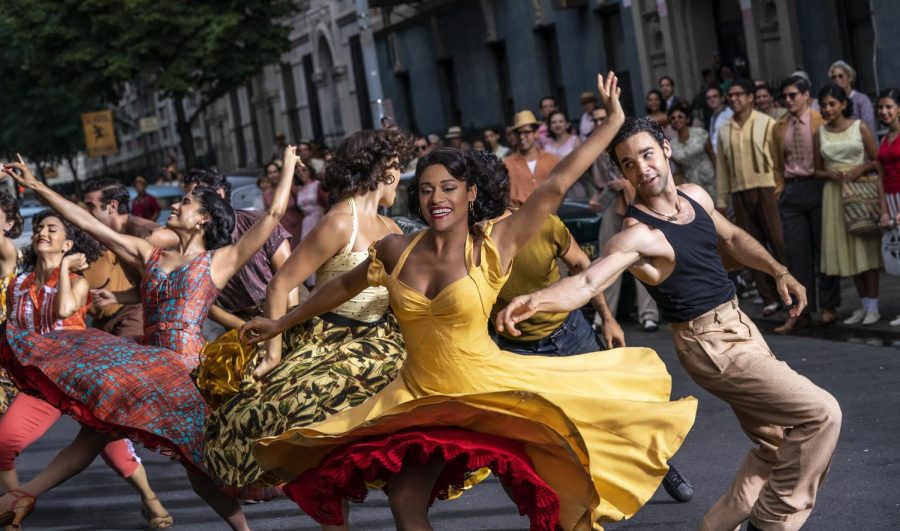 The 2021 version of the classic tale “West Side Story” is showing in surround-sound IMAX theaters. But when the notorious Jets gang strut onto screen in their 1950’s vagabond swagger, only to bust out synchronized twirls and pointed toes as the music kicks in, it screams Broadway.

Directed by Stephen Spielberg, this movie musical retells the story of the late Stephen Sondheim’s take on the Romeo and Juliet trope: “West Side Story.” The plot — a forbidden love tale, of course — follows the romance of Tony (played by a dreamy Ansel Elgort) and Maria (Rachel Zegler), who are members of warring gangs: the Jets and the Sharks.

Featuring numerous Broadway veterans, the supporting cast is just as — if not more — enjoyable than the leads. Ariana DeBose as Anita delivers a highlight performance as she dominates every scene she’s in. Whether she’s gushing about her love for America, twirling her signature red-accented dresses, or delivering tear-jerking dialogue about her struggles as a black Puerto Rican woman, she forces the audience’s attention to her.

The supporting members of the respective gangs deliver the goofiness expected of juvenile delinquents and the tension of the race and class divisions of the time period. Riff (Mike Faist), the leader of the Jets, shoots both snappy one-liners and daggers at his Puerto Rican adversaries.

Known for his role as the heartthrob love interest in the “Fault in Our Stars,” Elgort delivers a surprisingly layered performance as Tony struggles with the grief of past wrongdoings and with his love for Maria. The love story itself does, granted, come unnaturally fast considering they quite literally fall in love at first sight. But Elgort is able to fill the screen with his voice in his solos, as well as mixing well with the vocally-stunning Zegler. Though the chemistry does seem a bit rushed at times, the two leads deliver convincing enough performances for the audience to root for their love.

One of the most impactful performances comes from Rita Moreno, who originally played Anita in the 1961 version and now stars as the kind shop owner Valentina. Acting as a grandmother figure and moral compass in the story, Moreno performs with a gentle care that only comes from someone who’s been doing this for decades.

Sondheim’s version, though revered as a Broadway classic, is not without its drawbacks. The original musical’s depiction of Puerto Ricans has been heavily criticized for being insensitive to Puerto Rican culture. When Spielberg started the project, he vowed to fix these issues, meeting with several Puerto Ricans to ensure his version was more authentic.

Whether this version actually accomplishes this goal is a more complicated issue. Though it does provide needed insight into the struggle faced by Puerto Rican immigrants, it also coaches American-raised actors to speak in heavily-accented Spanish, which can feel inauthentic when telling a story of such genuine cultural struggle.

Spielberg also makes the choice to not use English subtitles when the characters speak Spanish. While this does help immerse the audience into the ethnic enclave of the West End, it also leaves non-Spanish speakers unaware of important nuances in the dialogue.

Despite its imperfections, “West Side Story” is a delight to watch. The electric dance scenes are reminiscent of watching a Broadway show, while lighthearted numbers like “Gee, Officer Krupke” allow the emotional beats to breathe and show off the talent of the ensemble. It is because of this high-energy tone that the emotional climaxes hit hard. Bring tissues.

Fans of classic Broadway, as well as avid movie-goers, will find something to love about this film. As a viewing experience, the movie is equal parts poignant and pleasant, and does a masterful tale justice.