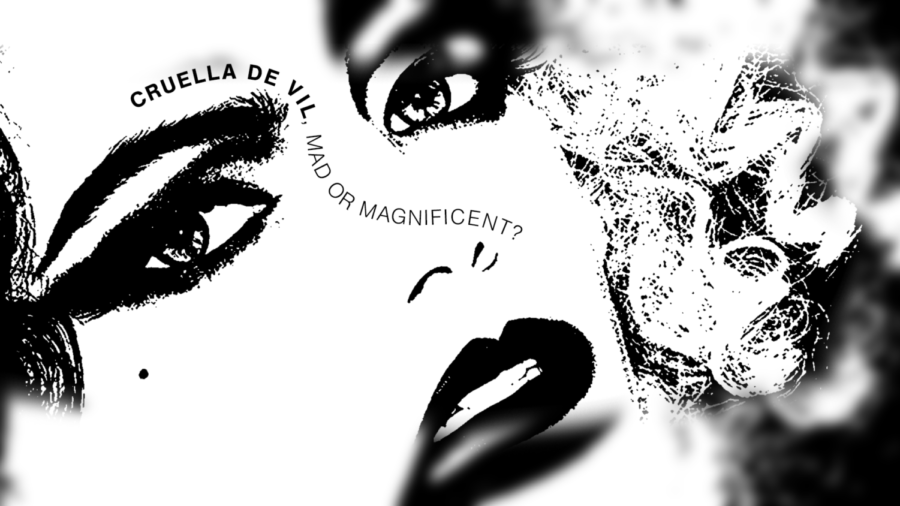 Disney has continued reviving their animated classics by bringing the fashion-loving, dalmatian-dooming villain to life in their newest film “Cruella,” directed by Craig Gillepsie. The 1961 animation “One Hundred and One Dalmatians” has always been my favorite movie by the Disney franchise, Cruella de Vil being ranked as the superior villain in my eyes, so I was weary that this movie would not do her psychotic self justice.

Taking place in 1970s London during the punk-rock revolution, a grunge aesthetic protrudes through the music selection, wardrobe, and overall appearance of the film. This film follows the antagonist-turn-good trope, as seen in Disney’s “Maleficent” (2014), where Maleficent is depicted to be merely misunderstood, rather than the heinous villain present in “Sleeping Beauty” (1959). Next in line is Cruella de Vil, who Gillepsie attempts to humanize by showcasing the challenges she faces, proving she isn’t all dog skinning, spot stealing, and psycho.

Cruella, originally born Estella, starts as a skunk-headed girl with a fiery spirit and a pin-covered blazer. Her bold sense of style causes her to be bullied at her preparatory school, but Estella fights back, earning her a suspension and a car ride to London. The trip takes a dark turn as young Estella finds herself orphaned after the sudden death of her mother. After arriving in London, she runs into two familiar faces, Jasper and Horace Badun. This gang of misfits finds fun and finance in petty crime. As their stealing escapades progress, the three are not kids anymore, and Estella, now played by Emma Stone, swaps the two-toned hair for auburn. When she thinks she has secured a job at a London department store, her hopes of delving into the fashion sphere are short-lived, as she is tasked with scrubbing floors and emptying trash bags. Despite the mops and brooms, her ambition and experimental fashion choices catch the eye of the narcissistic Baroness von Hellman, played by Emma Thompson.

The Baroness is renowned in the culture of couture and takes Estella in as a designer, fostering both an apprenticeship and rivalry between the two. Estella views the Baroness as a mentor, though quickly comes to find the secrets and conniving truth that lurks behind her high status. As Estella uncovers more dirt on London’s pinnacle of fashion, she goes full-on Cruella, igniting a feud as she seeks the glamour and recognition of the press to outshine her haughty competitor.

Fashion is a driving force in this film, making reference to iconic fashion pieces designed by figures such as Vivienne Westwood and Alexander McQueen. It felt at times I was watching “The Devil Wears Prada” though with a sinister side as the Baroness and Miranda Priestly could take over the fashion empire with one menacing glare. Thompson truly was the star of this movie, from her poise, self-absorbed mannerisms, and deadly gaze, to the point where, at times, she overshadows the true villain of the movie. This is due to Cruella’s humanized portrayal, casting Thompson as the vile antagonist and Stone as the antihero.

Incorporating themes of grief, rage, and revenge, this film is rated PG-13, a rarity for a lot of Disney classics. At two hours and 14 minutes long, this movie might not be the best pairing with a short attention span. Despite the extensive length, the pacing was relatively fast; though, as Emma vs. Emma style showdowns fill the streets of London, some scenes felt repetitive. The constant use of music also blurred the story that was trying to be told; the film was dependent on 1960s and ‘70s music to portray the desired mood of the scene, instead of letting the characters and dialogue speak for themselves. But, some of the songs did show the madness and spiteful nature of Cruella, most notably when she crashed the Baroness’s fashion show with a punk-rock, LED light display and a dalmatian fur coat. She claims the coat isn’t real, but is it really in Cruella’s interest to wear faux-fur? I don’t think so. Though the characters lacked complexity, their surface level personas and actions were wildly entertaining, livening the theatre with flames, striking looks, and a sense of madness. Cruella’s madwoman exterior is broken down to the vulnerability of goal-oriented Estella, battling with the troubles of her past and the surprising details she uncovers along her fashion journey. Does this mean I have fallen into the trap of feeling sorry for Ms. de Vil and believe that her troubled circumstances make up for her vile, mad, and ruthless ways? Well, simply put, no. Although, I would not pass up the opportunity to join her in a punk-inspired fashion take-down in the streets of London. You would have to be mad to turn that down, right?