THE STIGMA OF MALE DANCERS 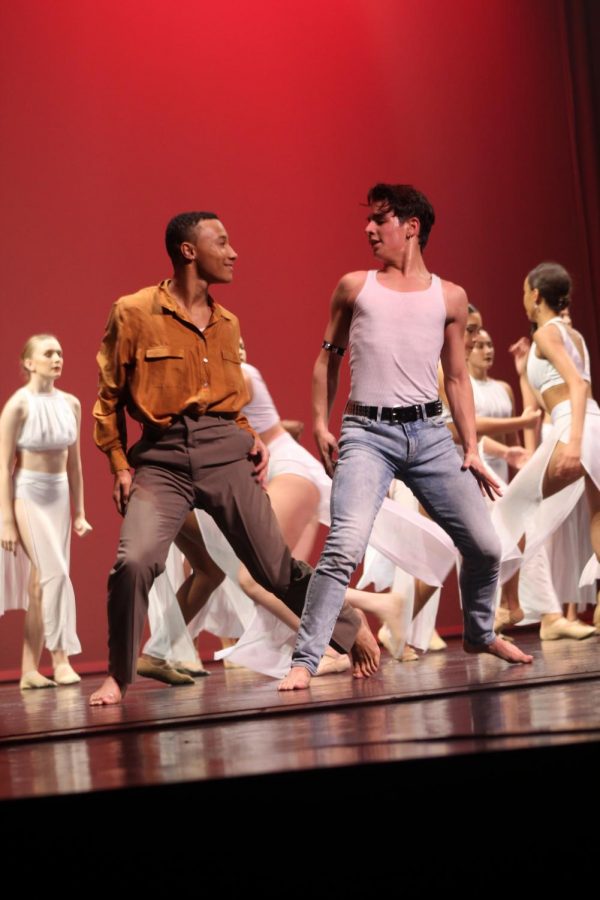 Dance sophomore Mason Evans and dance junior Brenan Gonzalez were just two of several male dancers in last year’s Spring Concert. “I think the biggest challenge [of being a male dancer] is all of the stigmas and stereotypes that come around,” dance junior Alex Thomas said. “[People say], ‘Oh, ballet or dance is not a sport and you don’t have to work as hard and this and that.’ Growing up and defying all of those odds is a challenge.”

Good Morning America’s Lara Spencer blew up on social media after receiving backlash from the dance community. Spencer commented on Prince George taking ballet, laughing with her co-hosts and adding that she’d like to see “how long that lasts.”

Following the incident, Spencer apologized on Instagram and live television. She also conducted an interview with several male dancers regarding their experiences. Although Spencer may have recovered from her ridicule, this situation underscored a much broader issue—society still seems to live under unspoken gender roles, giving those with large followings the ability to scoff at those who don’t fit the mold.

“I’m not heated,” dance junior Alex Thomas said, shaking his head. “I mean, people have their values and opinions and everything, but there are certain negative comments that people can say that a lot of people don’t want to hear, and I think just saying it on live television wasn’t a good idea, especially with everybody else laughing in the background. I think that’s what really set it off.”

Thomas pointed out that Spencer’s comments could have only served as an impetus for dancers to work harder. “Your enemies are your biggest supporters,” Thomas said. “Anything that your enemies say, just prove them wrong, and, in this way, prove her wrong—that us male dancers can do ballet.”

Most in the dance community were not enraged but rather disappointed at the ignorance that still exists. Many were surprised that the host of a show with such a wide influence would make degrading comments.

“In reference to Lara, I’m not necessarily mad at her for saying what she said. I’m more shocked, if anything, that she would go out and publicly say that on national television,” dance sophomore Mason Evans said. “Like, girl—everyone just saw that. I believe the reason she said it was just because she wasn’t educated enough [about] being tolerant and accepting.”

Many dancers and their supporters were taken aback by Spencer’s reaction to what they love to do. Male dancers of all ages, as well as their parents, took to social media platforms, like Twitter, Facebook, and Instagram, to educate Spencer and let her know that it is OK for boys to dance.

“If I could tell male dancers who are afraid to pursue dance one thing, it would be to not care what people think of you,” Evans said. “Use people’s judgments to push you to work harder. It shouldn’t matter what people think of you as long as you are happy and are trying to achieve your goals. It may be hard in the beginning, but it gets easier.”

Being at a school of the arts, students are no strangers to breaking boundaries and social norms, even in spite of obstacles. They take their passions to heart, and when someone threatens those passions, it can be tense and unsettling.

“I feel like one side of society supports male dancers, which is amazing,” Evans said. “There is also the other part of society [that] thinks that we’re all feminine and that dance isn’t important. But, I believe it’s just because they haven’t taken the time to understand it.”

There always has been, and likely always will be, people in society who look down on those who have uncommon interests—Dreyfoos, luckily, happens to be a haven of expression and acceptance. In fact, students celebrate each other’s originality, and dancers like Thomas feel that “it’s really welcoming to dance here.”

“At Dreyfoos, it’s different because … no guy is looked at differently because they dance,” Evans said. “People at Dreyfoos understand it’s an art form and are really accepting of it.”

As with anything, every individual artist faces a different experience as they pursue their career or passion. Thomas started dancing when he was just 2 years old, gaining more and more skills in his art over the past 14 years.

“It was hard growing up to dance,” Thomas said. “When people find that out, it’s weird. But, then they really see all the hard work and challenges that I’m put through.”

Adversity is nothing new to male dancers, but having people with common interests and struggles is a motivator. Dance dean Heather Lescaille pointed out that when her husband attended Dreyfoos in the ‘90s, “he was one of three male dancers in the program.”

“The biggest challenge [of] being a male dancer is being a minority,” Evans said. “Going into dance is sometimes a little nerve-wracking when you’re the only boy or there are only a small number [of boys]. Also, being a male dancer, I feel like sometimes it’s easy to feel out of place because there aren’t really a lot of us.”

However, the program has grown to include 18 male dancers grades 9 through 12 this year, with two others taking dance as an elective. Lescaille pointed out that the increase in male dancers is beneficial because there is “safety in numbers.”

“I think it depends on the group setting that they’re in,” Lescaille said regarding how challenging it may be to be a male dancer in today’s world. “I think among other adolescent males, in particular ones that don’t go to this school, [being a dancer] may be a difficult conversation still for them to have and that’s because of the lack of education of the arts in schools in general.”

Despite the various obstacles, many dancers express gratitude for being able to create their art. Dance proves to be a rewarding experience for all who have had the opportunity to partake in it.

“I think the greatest [reward], in general, is just expressing it and doing it because you’re passionate about it,” Thomas said. “And there’s nothing else in the world you’d want to do besides dance, all day, every day, for the rest of your life… that’s the biggest reward.”

Being such a disciplinary and complex art form, there are many values and lessons to be learned from dance. Everything from self-control to attention to detail can be applied to experience outside of the studio.

“I think [dance] teaches you how to fail and how to get back up, and I think that that’s a great lesson to have,” Lescaille said with a confident nod. “And then, I think for the audience, it teaches you to have an appreciation for something that’s live and right in front of you and to use your imagination—something I don’t think everybody uses anymore.”

Mrs. Lescaille aims to teach her students the right skills and mindset needed to defeat adversity and ignore the stigmas that surround male dancers. Lescaille hopes that her students will leave Dreyfoos not only “well-trained and well-versed in various techniques and styles, but [also] confident enough to go out there, regardless of what anybody says to them.”

Male dancers are just one of many groups in society who face hardships, whether it be difficult training or the ridicule from those around them. However, Dreyfoos students will continue to push through trials and setbacks as society adjusts to the ever-evolving world that will one day accept the fact that boys do ballet.

“They will face rejection,” Lescaille said. “Whatever rejections that they face [I hope] that they hold their head high and they keep pushing, they keep climbing and they have a successful career ahead of them in life.”