This Week on ‘Game of Thrones’: ‘Battle of the Bastards’ 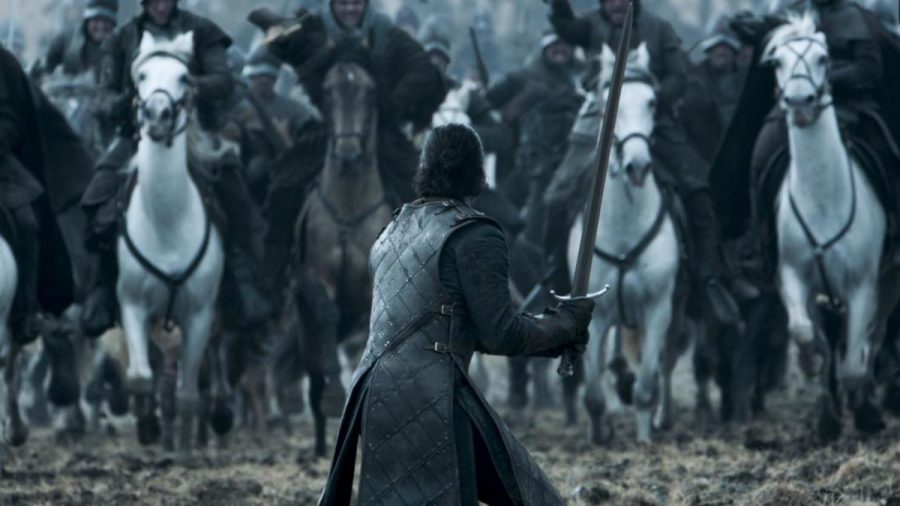 Jon Snow stands alone in the battlefield as the Bolton cavalry charges towards him.

Watching “Game of Thrones” is sometimes reminiscent of watching a big budget action film of the highest quality. Never has that been more clear than what audiences saw in the latest episode titled “Battle of the Bastards.” We were promised a battle at the beginning of the season, and this episode, it all came to a head. The show was firing on all cylinders and delivered some of the most explosive and shocking moments of the show to date.

The reputation of the infamous episode 9’s continues this season. Ned Stark’s death, the Battle of Blackwater, and the Red Wedding are just a few of the big moments seen in this episode. Before we get to the self titled battle in the North, audiences were surprised with an intense action sequence in Meereen to start the episode. Daenerys, who had just returned to find her city in complete ruin, had to think up a plan to stop the masters from destroying her city. In similar fashion to the ruthless actions of her father, the Mad King, she decides she wants to crucify all the masters and burn their cities to the ground. A more level-headed Tyrion advises Daenerys against that plan, facilitating an epic scene in which she and her three dragons fly to the attacking fleet and set a ship on fire. After six seasons, we finally see all three dragons in action, demonstrating how they will come in handy when she takes over Westeros. Theon and Yara finally reach Meereen once the battle is over and offer an alliance to Daenerys, giving her a fleet of ships in exchange for independence for the Iron Islands. Dany and Yara seem to be in agreement about the future, as they’re both women eager to take over a throne and change the world for the better.

In the North, Jon and Sansa ride to meet Ramsay before the looming battle, which leads to nothing but the two sides trading insults. Sansa shuts down Ramsay’s taunting, stating “You’re going to die tomorrow Lord Bolton. Sleep well.” Of course, Ramsay thinks nothing of it, and tells the men that he hasn’t fed his dogs in seven days. This would come back around to literally “bite” him, but more on that later. Overly confident Jon and Davos do a little pre battle planning, with no concern for what Ramsay may have up his sleeve. Sansa warns Jon that Ramsay is the one who sets traps and sees them coming, saying that he shouldn’t do what Ramsay is expecting him to do. She even admits that their brother Rickon is a dead man walking, and that they shouldn’t focus on getting him back. Meanwhile, Davos takes a late night walk before the battle since he can’t sleep, and unfortunately comes across the site where Shireen was burned alive. He finds the wooden stag he made her, and realizes what happened to her.

The next morning, both Ramsay’s men and Jon’s men line the battlefield full of burning crosses with flayed men ready to fight. Ramsay walks to the front of the his line of men pulling Rickon with a rope. He proceeds to let him loose and tells him to run across the field to meet with his brother. But there’s always something more when it comes to Ramsay, who retrieves his bow and arrow and begins shooting them at Rickon, intentionally missing his first few shots. Jon naively jumps on his horse and begins riding towards him thinking he can save them. Right before they reach each other, Rickon is pierced with an arrow through the heart. Falling into Ramsay’s trap perfectly, Jon begins riding towards Ramsay and his army, which leads to all of Jon’s forces following suit. Jon loses his mount and faces the Bolton army, ready for his last stand. Before they can trample and kill him, Jon’s forces crash into Ramsay’s, leading to chaos. Audiences are rewarded with a great example of cinematography as we get a three minute sequence filmed in one shot as Jon fights among all the confusion and action on the field.

The clashing between the sides creates a huge pile of bodies that separates the two sides of the field. Ramsay’s spearmen then form a phalanx around Jon’s forces, surrounding them. Jon is nearly suffocated as he’s trampled in the confusion. As all hope looks lost, the Knights of the Vale, called upon by Sansa, arrive and save the day as they mow down the Bolton forces. Ramsay, in complete disbelief, rides back to Winterfell as Jon, Wun Wun the giant, and Tormund chase him. Wun Wun shortly breaks down the doors of Winterfell and the rest of the forces are taken out. Wun Wun is delivered a fatal arrow to the eye by Ramsay before Jon completely loses it and begins pummeling Ramsay on the ground. Sansa shows up, leading to some sympathy for her and leaves him alive. The Stark banner is triumphantly put back on the walls for the first time since season 2. Justice is finally delivered for the worst person in “Game of Thrones” history. Ramsay is tied up and locked in the kennel with his hounds who proceed to tear him apart as Sansa watches.

The battle for Winterfell has to be one of the greatest battles in the show’s history and potentially one of the best in television history. The writing, the set pieces, and the cinematography couldn’t have been of higher quality, delivering one of the only truly perfect episodes of the show. With the season finale approaching fast, one can only hope they find a way to top an episode like this.