This Week On ‘Game of Thrones’: ‘The Door’ 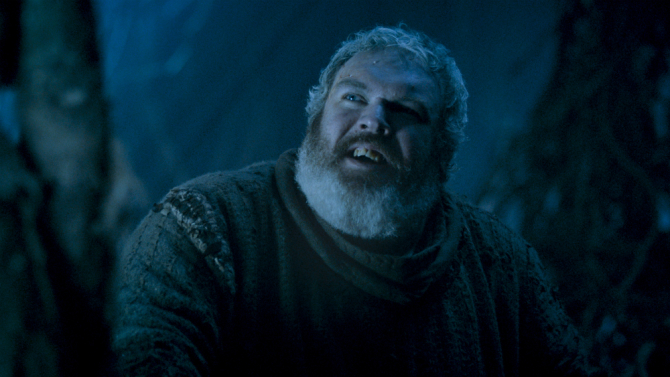 Irish actor Kristian Nairn has played the character of Hodor since season 1 of “Game of Thrones.”

“Hold the door.” Never again will fans of the show be able to hear someone say this to them without nearly breaking down. This gut wrenching phrase revealed one of the shows longest running mysteries in the fifth episode of season 6 of “Game of Thrones” titled “The Door.”

Fans were finally treated to the mystery behind how Hodor, Bran’s long trusted companion, came to speak only one word: “Hodor.” In a long string of connected events, viewers are made aware that Bran was the one responsible for Hodor’s lifelong disability. While having a vision, Bran is seen by the Night’s King, leader of the White Walkers, who grabs him by the arm. When Bran wakes up, his mark is left on him, allowing the Night’s King to enter the tree if he were to come for Bran. When the White Walkers arrive at the tree, Bran is still in one of his visions, while Meera and Hodor attempt to wake him up. The two manage to carry Bran all the way to the door at the back of the cave and narrowly escape the walkers. Meera shouts for Hodor to hold the door shut while she and Bran escape into the snow. But since Bran has warged into the future Hodor, the past Hodor he is seeing a vision that he is warged as well and hears Meera’s words. This leads to him having a seizure, and repeatedly cries “hold the door,” which goes on until his words eventually merge into “Hodor.” This revelation is intercut with Hodor being torn apart by the Walkers in the present day, which makes it a devastating moment. We lose a beloved character just as we find out his heartbreaking backstory.

The attack scene is reminiscent of last season’s “Hardhome,” where a large group of White Walkers attacked the Wildlings’ home, and is the first major White Walker offensive this season. It is revealed that the Children, the creatures guarding Bran and the Three Eyed Raven, are the ones who created the White Walkers centuries prior. They were meant to combat the invading humans who were taking their land, but eventually grew out of control.

Across the sea, Jorah finally revealed to Daenerys his case of Greyscale, which is slowly killing him. Heartbroken and shocked, she tasks him with finding a cure, healing himself, and returning to her to advise her when she conquers the Seven Kingdoms. In Meereen, Tyrion and Varys are visited by another Red Priestess, who believes Daenerys to be the chosen one. Varys is wary of listening to her, until she reveals that she knows information that only he could possibly know, proving her magic to be real. Arya continues training under the Faceless Man, which, though interesting, feels like a retread of exactly what she went experienced last season. Through all Arya has endured in the course of the show, it feels as though her character should be doing bigger and better things at this point.

In Castle Black, Sansa is finally asserting herself and using her power to take a stand. Littlefinger’s decision to marry her to Ramsay came back to hurt him, as Sansa has finally had enough and turned him away for good. Whether he truly knew what Ramsay would do is another story, but it’s safe to say we haven’t seen the last of Littlefinger, as he most likely has a bigger plan in his mind for the war to come in the North. Sansa also stepped up to make her case for which families Jon should ally with in the North. She is emerging as a major frontrunner in the game, something we’ve never seen from her character up until this point. And who could forget the Brienne and Tormund romance that’s brewing, a surprising match made in heaven. It’s always hard to say goodbye to characters on “Game of Thrones,” especially someone like the loveable Hodor. But this episode brought a close to a superb first half of the season and set the stage for what’s to come next. Winter has finally arrived, and who knows how many victims will be brought with it.