This Week on ‘Game of Thrones:’ ‘Oathbreaker’ 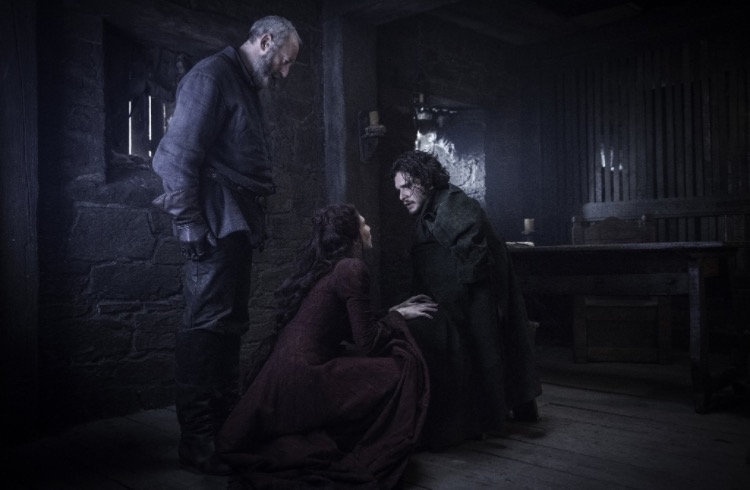 "Game of Thrones" character, Jon Snow, awakens to a surprised Davos and Melisandre.

From Winterfell to King’s Landing and across the sea in Meereen, vengeance is on the minds of many players in this week’s “Game of Thrones” episode titled “Oathbreaker.” With the return of more characters and a follow up to some of last week’s stories, the episode was complete with deaths, revelations, and setup for the future of season 6.

If the big news hasn’t yet reached you, Jon Snow made his epic return in the final moments of last week’s episode. This week’s show immediately follows up with the aftermath of his resurrection and how everyone around him deals with it. Melisandre, who initially believed she failed at bringing him back, is filled with hope that her prophecies may actually come true. The rest of the men in the Night’s Watch are stunned, with some even viewing him as a god of some sort. Snow delivers his much deserved justice on the men who killed him, including his biggest rival Alliser Thorne, and his young prodigy Olly, who delivered the final blow to Snow’s heart that killed him. After the two of them are hanged for their deeds, Snow promptly decides he will leave the Night’s Watch. Under their vows, men must serve at the Wall until their “watch has ended,” or when they die. Since Snow had technically died, he is free of his vows, and can pursue his next course of action. He is finally headed south, where he will hopefully find his sister Sansa and take back Winterfell. It was a moment many fans have been waiting for since he first took his vows. His commitment to the wall has kept him from involvement in the major power struggles over the course of the show, and it looks like he will finally be able to get more involved in the central action.

Ramsay is now fully in control of Winterfell, and is looking to attack Castle Black and murder Snow with the help of some allies in the North. One of them brings him a “gift,” which is revealed to be Rickon Stark, the youngest of the Stark siblings who haven’t been seen since season 3. Though it was a nice moment to see him return, it only signaled bad news for the young boy, who will now face the wrath of Ramsay who is looking for revenge in the wake of Sansa’s escape.

Audiences also got to check in with Bran, who witnessed a very interesting flashback. We see a young Eddard Stark, Bran’s father, battle Targaryen soldiers at the Tower of Joy during Robert’s Rebellion, where he has come to find what has happened to his sister, Lyanna Stark. After defeating the soldiers, Ned heads inside to find his sister, before the flashback cuts back to the present. This scene teased one of the most famous theories in the “Game of Thrones” universe. The theory, dubbed “R+L=J,” is the idea that Lyanna Stark, who was kidnapped and raped by Rhaegar Targaryen, son of the Mad King, gave birth in the Tower of Joy right before she died, forcing Ned to take the child under his wing. Who was that child? Jon Snow. This theory would not only confirm that Jon Snow is actually part Targaryen, but that he is not the bastard son of Ned as previously believed. It has yet to be confirmed, but the way the show is headed, the truth may be revealed in the coming episodes.

In Meereen, Varys continues to do what he does best: brilliantly collect information through his wits and network of spies. His intellectual abilities are showcased here as he uses his skills to get a woman to reveal important information regarding the rebellion in Meereen. Relaying this information to Tyrion, the two will most likely formulate a plan to exact revenge on the masters who are funding the operations. Finally, in King’s Landing, King Tommen uses his little strength and wit to attempt to get his wife released from prison. But of course, he is easily manipulated by the High Sparrow and stands down. Hopefully this story is wrapped up sooner than later, as it seems the characters in King’s Landing are stuck dealing with this tired conflict that is leftover from season 5. This is especially true for people like Cersei, who, instead of having a hand in the major events happening around Westeros, are left to do nothing but take out the very people she regretfully put into power last season.

With a handful of stories and even more revelations, this season continues its move towards more conflict. Major characters are still getting into place for upcoming confrontations and we continue to watch as the pieces of the puzzle are laid out. With Jon Snow on the move and progress in Meereen, we may finally have something to root for in this show.