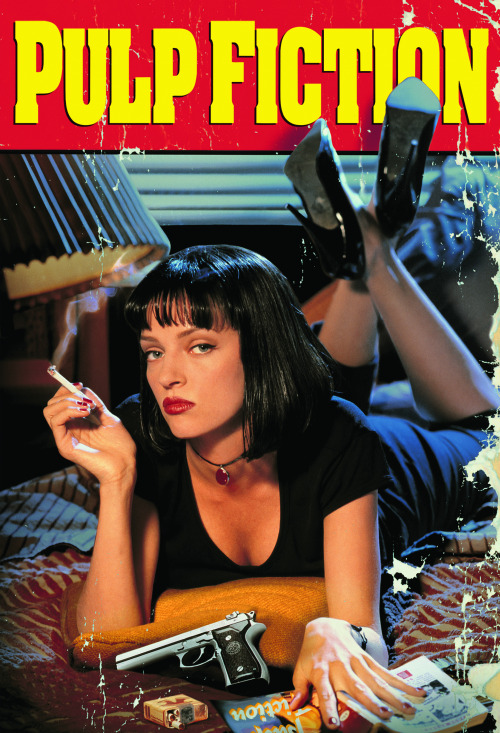 An official poster for "Pulp Fiction," which was released in theaters on Oct. 14, 1994.

There are only so many instances in a lifetime when a film comes out that is so groundbreaking that it completely transforms the cultural landscape. One of those movies is “Pulp Fiction,” a neo-noir crime drama that intertwines the stories of two loyal hitmen, a struggling boxer, and a gangster after a mysterious briefcase. Directed by Quentin Tarantino, it is one of the most well written, well acted, and stylistically unique movies ever made.

From its title to its closing scene,  “Pulp Fiction” leads the movie industry with its substance. The movies title “Pulp Fiction” refers to old magazines known as pulp magazines, named after the type of paper they were printed on and famous for their explicit fictional stories highlighting sex, violence, and drugs. A title card opens the movie with a dictionary definition of “pulp” for those who are not aware of its meaning. The inspiration is evident all over the film, with consistent use of drugs such as cocaine and heroin, as well as a balanced dose of violence scattered throughout the film.

The movie follows a nonlinear storyline, with the different chapters taking on different narrations throughout multiple time periods.. One of the greatest things about the movie is its unique structure, redefining how a film could be shown to audiences. The movie opens with lovers Honey Bunny and Pumpkin plotting to rob the restaurant they are currently dining at. It then swiftly moves into the next scene featuring Vincent Vega and Jules Winnfield, the two hitmen, picking up a mysterious briefcase from some untrustworthy associates of their boss, Marsellus Wallace. These two unrelated stories flowed accordingly even though they are separate and not in chronological order.

The movie’s best element is it’s dialogue that drives the film from chapter to chapter. For a good five minutes straight, Jules and Vincent do nothing but talk about how a man was thrown out of a window by their boss for giving his wife, Mia Wallace, a foot massage, and what they believe the true implications of a foot massage are. The Jack Rabbit Slim’s diner scene between Mia and Vincent is iconic, and completely driven by a conversation that discusses awkward silences and pilot TV episodes. The chapter accumulates to one of the most tense scenes of the movie: Mia’s drug overdose. After she has been given the antidote, the scene ends with the lines: “If you’re alright, say something.” Mia replies, “Something.”

The Bonnie Situation, one of the most hilarious chapters in the whole movie, comprises of Jules and Vincent furiously trying to figure out what to do after Vincent has accidentally shot someone in the head. The banter between the two makes the situation so much more fun and adds to the audience’s love for the two heroes. With each scene containing a slow monologue, the film somehow keeps your interest and adds tension. The dialogue is filled with pop-culture references, including certain shots recreated from other movies or lines from TV shows appearing here and there.

The acting from Uma Thurman, John Travolta, and Samuel L. Jackson is phenomenal, as viewers instantly connect to them despite their criminal backgrounds. From start to finish, you are sucked into the story. Once the dialogue is over, the robbery is stopped, and the briefcase is delivered, “Pulp Fiction” will be etched into your memory as a cinematic masterpiece.