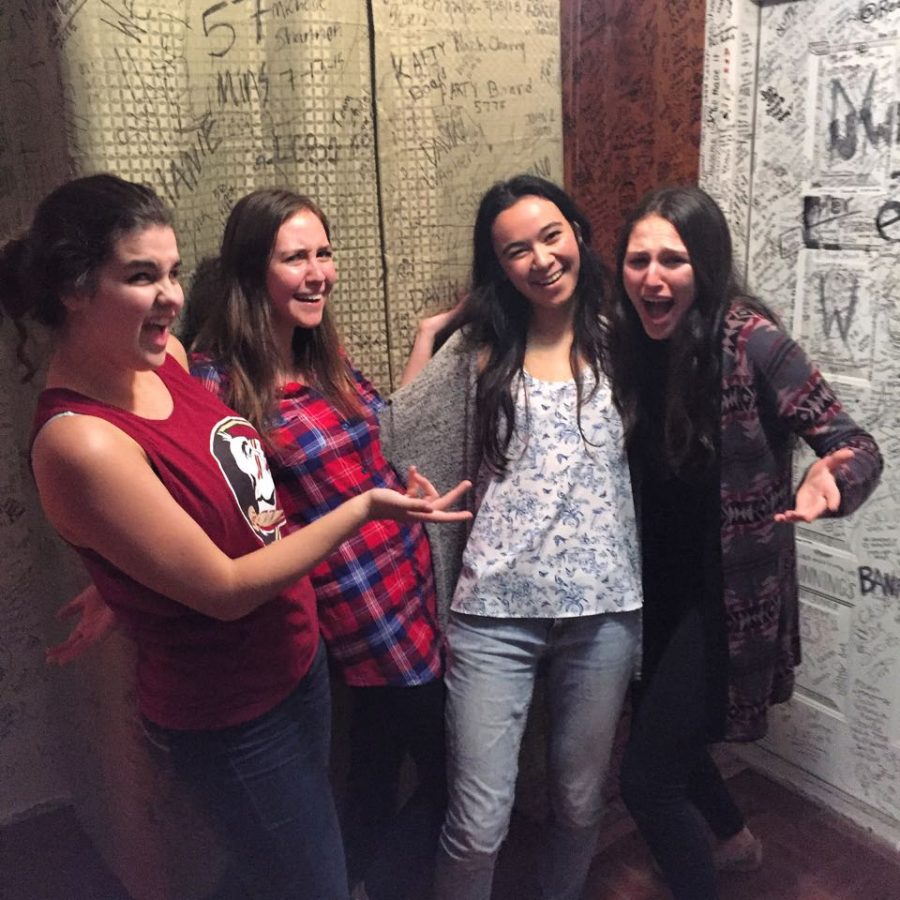 The door shuts behind us. The TV in the corner turns on and a countdown begins. We have 60 minutes to escape this room.

For my friend’s birthday, a couple of my friends and I decided to surprise her by participating in a room escape game at QQuest Live Escape Games in Pompano Beach. The concept is simple: You have 60 minutes to use clues dispersed throughout the room to find a way to escape. Your “gamemaster” watches you work over cameras, and if you need a hint, you can contact him or her via a walkie talkie. However, for each hint you receive, a six-minute penalty gets added to your final escape time, hurting your chances at breaking record time.

We signed up for “Room Amnesia.” The premise is that you ate a drugged sandwich, and you woke up in a strange room with no memory of how you got there and a note saying that the police are after you. If you don’t escape in 60 minutes, the police will arrive to arrest you. According to our gamemaster, the success rate is around 15 percent.

The group size for each room is two to 10 players. We were a group of four, and we felt like it was a good number as we were able to divide tasks, but it wasn’t too crowded. You may get grouped with other parties, but we were the only group scheduled for the time.

We started by each searching a section of the room for clues. The room appeared relatively mundane, with a couch, a table and chair, bookshelves, and other typical furniture.

In the beginning, we were a bit unsettled, as we’d had a rocky entrance. We chose to set up an 11 p.m. appointment, and as we pulled up to the small building with boarded-up windows we began to have second thoughts. When we approached the front door, we heard screams from inside. A keypad was attached to the door, and we entered the “room code” we’d been emailed with our booking confirmation. After a couple of unsuccessful tries, a group of people burst through the door, running past us and screaming. They had been the group scheduled before us and thought it’d be funny to scare us. They succeeded, as my friends and I all screamed and recoiled several feet back. This experience set the tone for the rest of the night.

Thus, when we began our escape, we were already shaken up. The loud, eerie noises including police sirens and a woman laughing that randomly emitted from the TV didn’t help.

The QQuest website says, “Most people would describe our game rooms as intriguing and possibly a little goofy, but certainly not scary. You will not find any severed heads in the room, and no one will jump out at you in a zombie costume. Our games make your heart beat with excitement, not fright!” Despite this assurance, my friends and I did quite a bit of screaming at things that weren’t actually scary and had to mentally and emotionally prepare ourselves every time we unlocked a door. We’ve chosen to blame the group that scared us for our jumpiness.

I have been a fan of escape-the-room computer games for a long time, and I was excited to attempt it in real life. Some puzzles such as using certain clues to find a passcode immediately clicked for me because they reminded me of puzzles I had completed online. My friends and I were able to use clues to solve all of the puzzles and figure out the combinations for what seemed like an endless stream of number locks (there were at least eight). We only asked for hints when we were confused about where to use certain clues or what to do next, but we applied the logic ourselves. Our tasks ranged from using books to help us break codes, to translating Roman numerals, to completing Sudoku under severe time pressure.

Because we were so hesitant to complete certain tasks for fear of jump scares in the beginning, we lost time. It felt like we completed the majority of the tasks in our last 20 minutes, because we had a good understanding of what had to be done at that point. By the time the counter reached zero, we knew we were very close to escaping but accepted our fate of being arrested for the drug-induced crimes we had committed, which we had figured out the details of during our search for clues. (Spoiler alert: The crimes are really weird.)  However, our gamemaster was nice enough to allow us extra time because we were the last group in that room for the night, and she saw how close we were to victory. Within about five minutes, we emerged triumphant from the locked room.

Despite our initial reservations, my friends and I truly enjoyed trying to escape. We worked together as a team, each of us figuring out different puzzles and finding specific clues. The puzzles were challenging but not impossible, and I am impressed by the elaborate design of the room.

We have agreed to return to QQuest to complete the location’s other room, “Chainsaw Bob.” In this game, Chainsaw Bob has lured you into his trap, but his chainsaw has broken and he has gone into town to get a new one. You must escape before he returns. We are a bit worried about what we will find in Chainsaw Bob’s lair, but we are excited to escape.

Although we technically did not escape in time, we were proud of ourselves nonetheless, especially when the escape rate is so low. If you are looking for a fun way to bond with your friends or family while feeling more intelligent than you probably are, QQuest has got you covered.

“It was probably the most intense hour of my life,” Spanish River senior Lucy Hotz said. “I feel like we’re all closer having gone through it.”