The Energy and Connectivity of Jazz

Jazz students play with a full band for their first full concert since 2020. 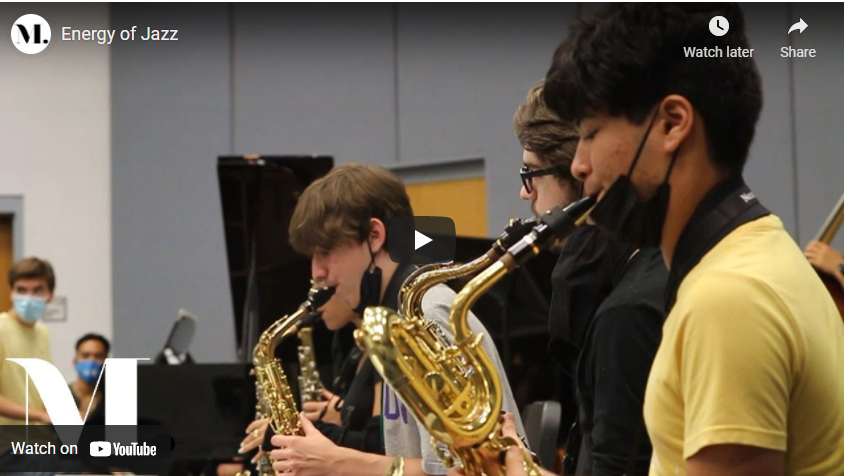 A comma was placed in the title of the piece “A Little Bit of Blues” in the sentence, “The melodies of “A Nasty Bit of Blues,” echoes in the music building as … ” The comma has been removed.

A word was used incorrectly in the sentence “Students grasp their instruments at their side as they wait for their queue.” The word “queue” has been changed to the correct term “cue.”

The melodies of “A Nasty Bit of Blues” echoes in the music building as jazz students come together in preparation for the department’s first concert of the year. Students grasp their instruments at their side as they wait for their cue. Jazz Director Christopher De Leon conducted the performance, intermittently lifting his eyes from the music to the band, and back to the music.

“They’ve been playing together consistently since the beginning of the school year,” Mr. De Leon said. “It’s the earliest [full] jazz concert the jazz program has ever put on … the energy is right, they’ve really worked hard.”

Mr. De Leon and the jazz band have recently celebrated a lot of successes together. Last year, the jazz band attended a competition often referred to as “The Super-Bowl of Jazz Bands,” where out of 70 bands who submitted entries, only 15 were selected by a panel of judges. Our jazz band was one of them. This was the first time since 1998 that Dreyfoos was selected to attend this event. Mr. De Leon plans to use the critiques from the judges at this event to improve the band even more.

“It pointed out some things to us as an ensemble that we really need to focus on and maybe is new to the kids,” Mr. De Leon said. “In a way, it was a big challenge, not having everybody here last year. But now that we’re here, we can really address some of those things, and springboard into new successes.”

Last year, jazz members experienced difficulties as they tried to form relationships with one another and come together as a band. It was a challenge for students to prepare for their performances, as they only rehearsed one or two times before a concert. Further, it was tough for students to connect with Mr. De Leon, as he only stepped in as the new jazz director in the middle of the last school year.

This year, however, the band has multiple instances to practice together, as well as build connections to one another and their director.

“I feel like I’m communicating with everyone a lot more. Being able to actually play together is good, compared to last year where it didn’t feel like I was there at all,” band senior Ethan Sanchez said. “When I play with them, even if we’re just improvising together, or having each other do solos, it’s good.”

This bond has not only strengthened between members of the band, but also for Mr. De Leon.

“He gets the band excited and there’s a great energy in the band room,” band sophomore Anna Catherine Coutinho said.

This feeling is something that has been consistent throughout multiple members of the Jazz band.

“He’s pushing everybody to play a lot more and that’s what I like,” band senior Nathan Delgado said. “He’s getting us to a lot of places, and we weren’t allowed to do that in the past two years.”