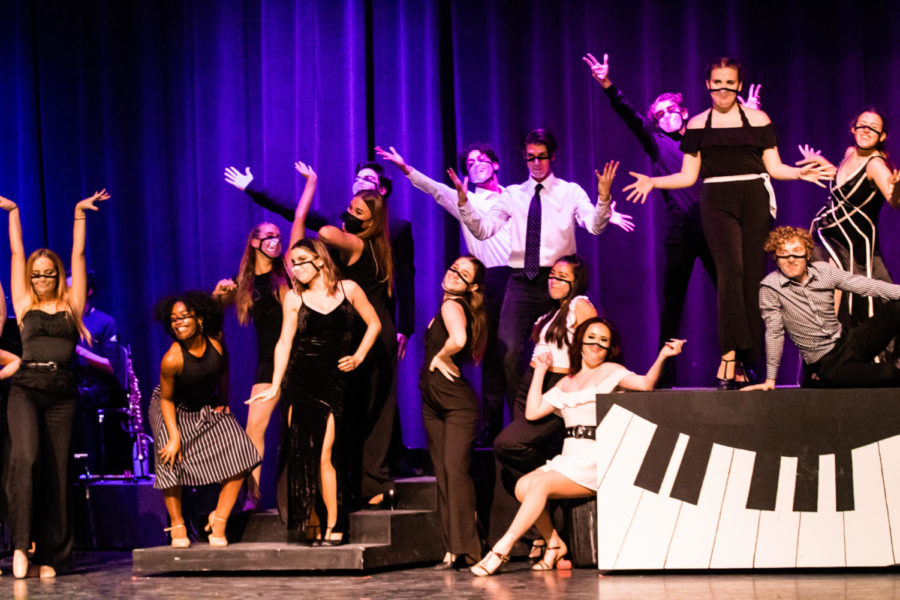 The cast of The World Goes ‘Round strike their final poses in the last number as the audience applauds and the curtain descends.

The audience murmurs under the dimmed lights. Actors are called to the wings as the rest of the cast hurries from the dressing rooms to the stage. The auditorium goes dark except for a spotlight illuminating the center of the red curtain, the symphony’s melodies rising as the curtain does for the first time in over a year.

“It feels exhilarating to finally be able to have a live audience, because [it] creates a different energy than performing in your room at home,” theatre sophomore Carsten Kjaerulff said. “It’s an honor to be able to perform in front of people for the first time in over a year.” 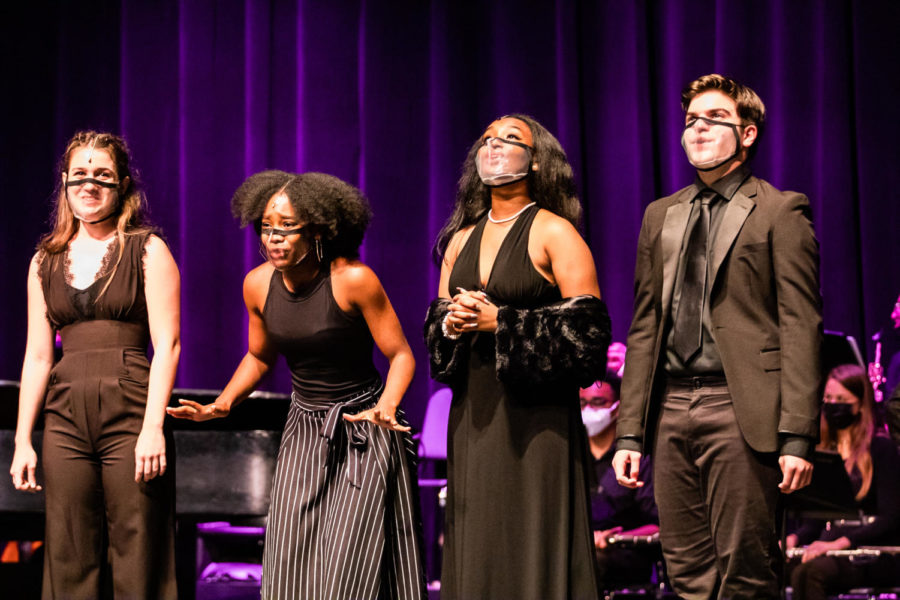 The production, a musical review featuring songs from shows by John Kander and Fred Ebb, was directed by theatre dean Michelle Petrucci. Theatre senior Dillon Cavanagh worked as the dramaturg, the “historian” of the production, and researched the shows the songs were chosen from. Cavanagh advised cast members to research the show and its creators by completing two google forms each week.

“There’s so much to a lot of the songs that gets overlooked,” Cavanagh said. “The song ‘My Coloring Book’ was the first song that Kander and Ebb ever wrote, and that was what caused them to write together.”

The audition process functioned differently for this production. Due to the musical review format, students auditioned for solos instead of assigned roles. The cast was also involved in various ensemble numbers. To audition, applicants submitted a pre-recorded video of themselves singing a 32 bar cut of a song of their choice. A callback list was sent out shortly after telling selected students which song to sing from the show. Then, the two-month rehearsal process began, consisting of song practice and blocking.

“First semester, we were all virtual and I tried to participate as much as I could. I did some virtual shows, but there’s nothing like being in front of a live audience,” theatre senior Rachel Robinson said. “Being in Meyer and doing the show was so rewarding, and it’s been a year and a half for me since I’ve opened the show on a real stage.”

At 6:48, 12 minutes before showtime, the performers piled into the Brandt Box Theater for their pre-show warmup of “What Time Is It?”  This pre-show ritual stirred excitement with less than 10 minutes until the curtain rose.

“We have a tradition that we do with the underclassmen and senior girls and we have our warm up with the cast and it felt so much more energetic,” theatre senior Brooke Debeer said. “I missed those traditions that we do before shows.” 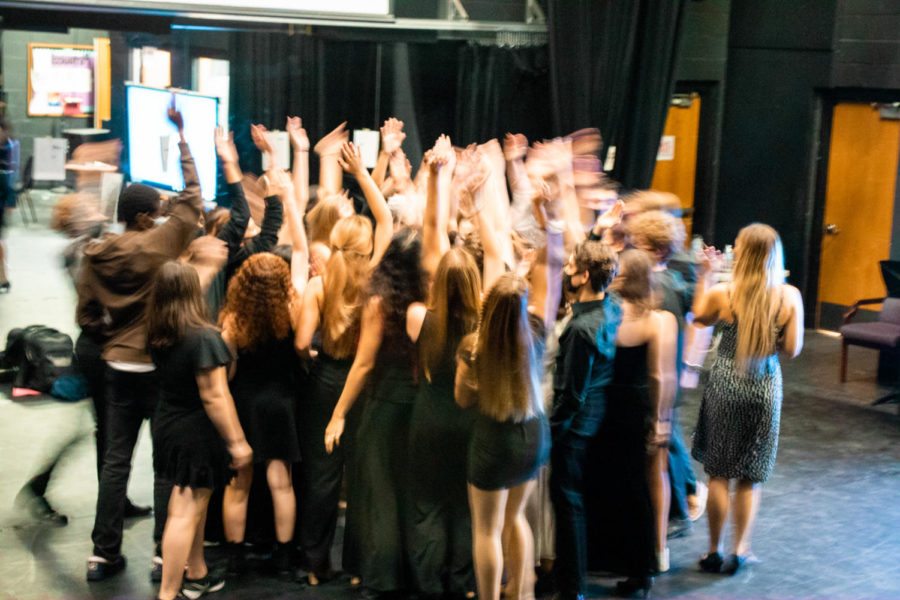 As part of their warm up, the cast and crew gather together to cheer before going on stage.

A majority of the performers wore clear masks, conceived and made by Debeer, who used shower curtain material that was left over from her senior rep project. It took about a week for Debeer to make 30 masks for the performers.

“We were practicing with black masks throughout rehearsal, and I was thinking about how other places have done clear masks and we weren’t getting information that we were going to have [them],” Debeer said. “For my senior show, my last time at Dreyfoos, I want the audience to see my face … I came up with this pattern from a mask that fit me and copied the pattern and made it with the clear material and showed my director and she loved them. They didn’t fog or echo as much as the ones she had seen in stores.” 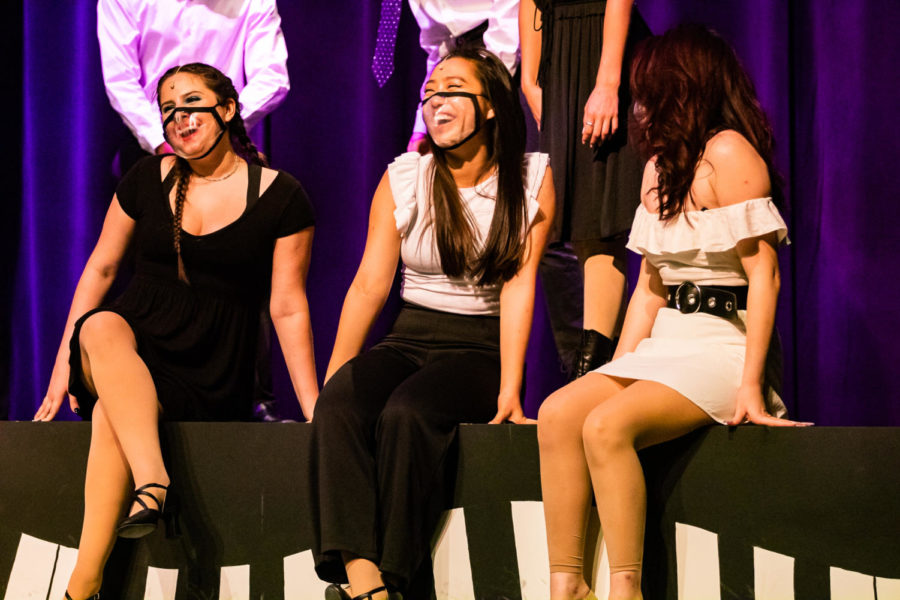 Smiling, theatre seniors Gianna Romano-Hall and Victoria Hockton and theatre junior Angelina Tharitimanont watch from the stage platform as others perform their solos.

Theatre sophomore and props manager Samantha Peitz helped ensure props stayed sanitized. All props were placed in squares marked with labels and blue masking tape. Unused props were housed on a table and then transferred to another table where a crew member would sanitize them with wipes. For theatre freshman Maya Gary, who worked as assistant stage manager (ASM), this was her first in-person production on campus.

“Once I found out there was a live production I was excited by the idea of getting to work on it. It let me learn more about how to work as an ASM in in-person shows, as well as letting me get involved in the theatre community more,” Gary said. “I’ve gotten to know amazing people through the experience. I’ve also learned more about working in theatre and have been able to experience how it feels to work on a show here.”

This production was also theatre senior Miranda Sampaio de Faria’s first musical review, since she is on the acting track. When the opportunity to perform in-person arose, Sampaio de Faria seized it.

“It was something I never tried and never dedicated time to and I was like, ‘It’s my last year at Dreyfoos and I want to do anything related to theatre that I can,’” Sampaio de Faria said. “[My favorite part of opening night] was the first number that everyone went on stage together and how right before, we were backstage hyping each other up. Coming in and seeing everyone for the first time and getting to share that experience with people that I’ve known … felt special.”

While actors sang and danced across the stage, eight musicians played throughout the duration of the show. Prior to opening night, the musicians had about a month to prepare their music through two rehearsals a week. During tech week, they stayed until 9 p.m. each night to rehearse with the performers. Band junior Emily Breidenbaugh played the piccolo, flute, and alto flute.

“You could hear the audience laughing at points and engaging with the performance,” Breidenbaugh said. “To be able to share the music you’ve been working on and love with others makes it so much more worth it.” 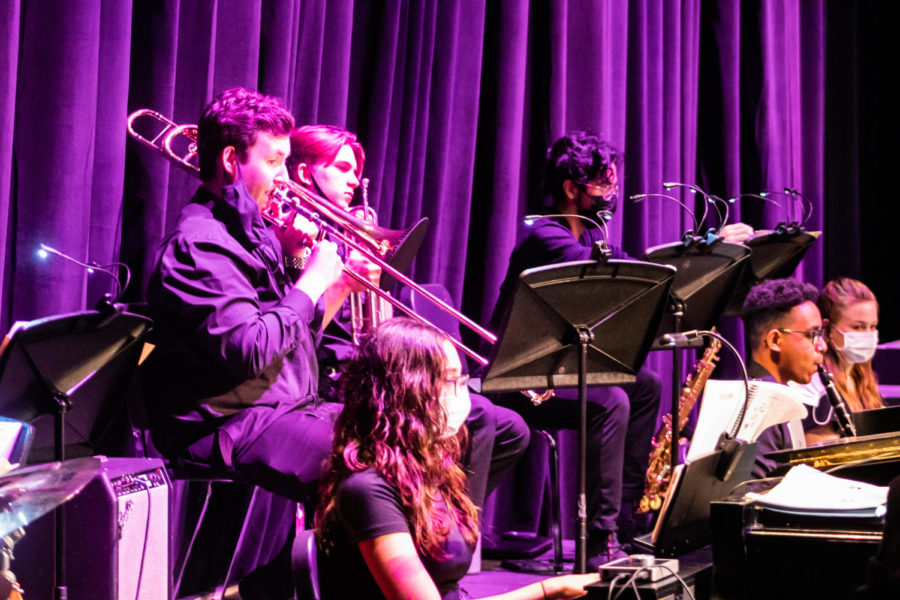 Members of the band play to the tune of ‘Rink’ by Kander and Ebb in the first act.

As the curtain dropped and the final number concluded, performers spilled back into the wings, ran to the backstage hallway, and shared laughs and hugs on their last opening night as seniors.

“I thought I would never be in Meyer Hall again, so when the principal cleared us to have a Meyer Hall show, it was an exciting day for everyone in the theatre department,” theatre senior Hannah Gardner said. “When everyone was hearing the cheers, some actors were crying because it’s been a long time since we’ve had it. It’s been an exciting and emotional experience.”