FROM GYM TO KRAVIS: A MERRY PRISMAS SPECTACULAR 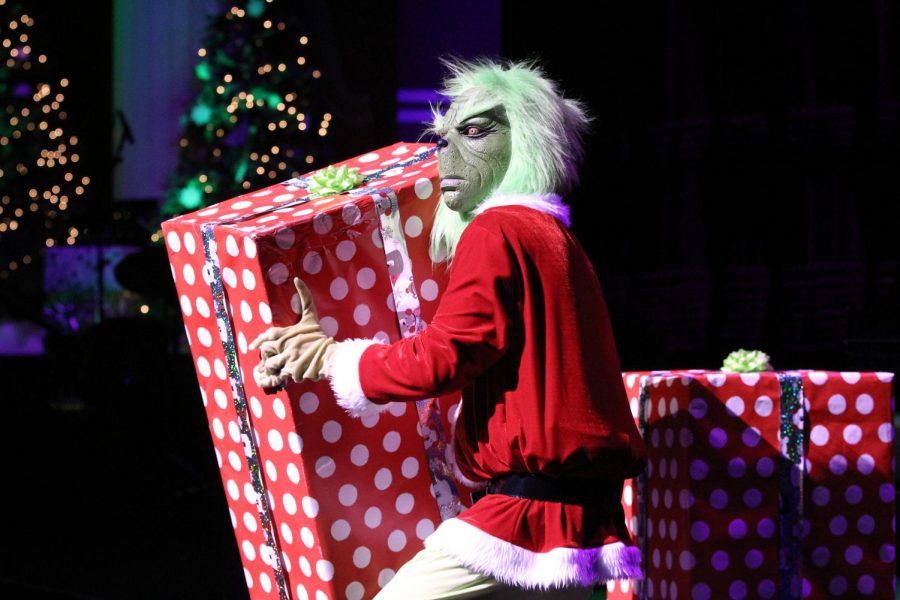 On Dec. 4, students, families, and alumni filled the Dreyfoos Hall at the Kravis Center of the Performing Arts for the 30th annual Prism holiday concert. Through donations from the family of novelist James Patterson, this performance has been held at the Kravis for the last eight years. This year, the music department added interactive elements to the display, such as the Grinch swiping presents off of the stage and vocal senior Ben Myers, dressed as Santa, sprinkling tinsel over singers during an a cappella piece. “The show has only gotten better since I've been in Dreyfoos,” piano alumnus Hunter Fani (‘08) said. “It was [a] really amazing experience to see, and brought up a lot of memories of stuff that we used to do during Prism time and doing the Prism concert series. It was a real experience.”

It’s the tiptoe of the Grinch, the traditional African beat of the bongos, the impromptu karaoke of Mariah Carey’s holiday classic — it is Prism. The annual holiday concert returned to the Dreyfoos Hall at the Kravis Center for the Performing Arts on Dec. 4. Eight years ago, the blend of cultural music experiences debuted under professional key lights instead of in Meyer Hall or a fluorescent gymnasium as they did 30 years prior. This change enabled every student to be able to experience Prism, unifying all students to celebrate one holiday season: “Prismis”.

“I’m excited about just hanging with my friends backstage, and then on stage, playing [and] listening to all the festive pieces with them,” band sophomore Emily Brown said before the performance. “But I’m nervous about being on stage at the right time. [I’m] hoping we all sound good and play well.”

Students and parents packed Dreyfoos Hall as the house lights dimmed and ambient Christmas trees lit the aisleways, glowing against blazers and gowns. Musicians practiced for this moment in the 2,000 seat auditorium twice — once in a full-day dress rehearsal, and again in a performance for numerous local elementary, middle, and high schools.

“My favorite part about Prism is playing “Jingle Bells” because it is an exhilarating experience,” piano sophomore Deven Seedial said. “It was a lot more work for the quartet, as we had to get together a lot more. We didn’t really get the tempo together till this morning. Before the concert, we had a metronome playing. When we were backstage, we were literally just clapping it to make sure we won’t forget.”

Santa and cowboy hats, yamakas, reindeer antlers, and traditional African outfits graced the stage to embrace the multifarious traditions that the holiday season brings. Music alumni attend the concert each year to see how these elements have evolved since their departure from the program.

“You guys were just able to turn everything up to 11,” piano alumnus Hunter Fani (‘08) said. “Back when I was in Dreyfoos, they had different orchestras and different small groups [in] different parts of the auditorium, [but] having the Kravis just allowed it to be even more than before. The effects that you guys did, like the arrangements [with] cowboy hats [and] having the Grinch walk around while [piano junior Shixuan Zhou was] playing, really added a special element to it.”

Auditions were held two months prior to the event, with students composing their pieces in small groups. They included “YeeHaw the Mistletoe,” “You’re a Mean One, Mr. Grinch,” and students’ renditions of “Pentatonix” style acapella groups. As a result of countless hours dedicated to the show, Prism was able to culminate in a month and a half.

“It was cool seeing all the other music majors perform,” band freshman Haley Avery said. “We detailed every single measure until it was close to perfection. Without [this type of practice], we would definitely be unprepared.”

Although Prism is a time of joyous holiday celebration, it also proved to be a moment of melancholy for seniors, who showcased all four years of musical growth one last time. With Prism’s finale, they reflected on a musical family and home away from home.

“[A highlight of this year’s Prism was] spending time with people that I’ll have to part with at the end of the year,” strings junior Jay Coleman said.

Along with students performing pieces on stage, many worked equally as hard backstage to help maintain the fluid appearance of the display.

“It’s definitely a lot more than I thought it was going to be,” piano sophomore Alice Chong said. “I’m an apprentice of Michelle Yang. She’s the actual leader of this all. We basically run around and select kids and assign them to where they’re going. Being a crew member, I actually made a lot of new friends.”

Santa’s tinsel confetti and glitter from festive attire that covered performers head to toe weren’t the only things that sparkled on stage. Prism performers’ smiles glimmered as they displayed what Prism is all about according to music majors: a coming together of joyous music and holiday spirit.

“Oh Jesus, I don’t know,” Fani said when asked about his favorite piece. “Don’t ask me that question, it’s all good. It’s like choosing a favorite child. It’s not going to happen.”

Below are a few moments from the rehearsals and final performance of this year’s Prism concert, held at the Kravis Center for the Performing Arts.