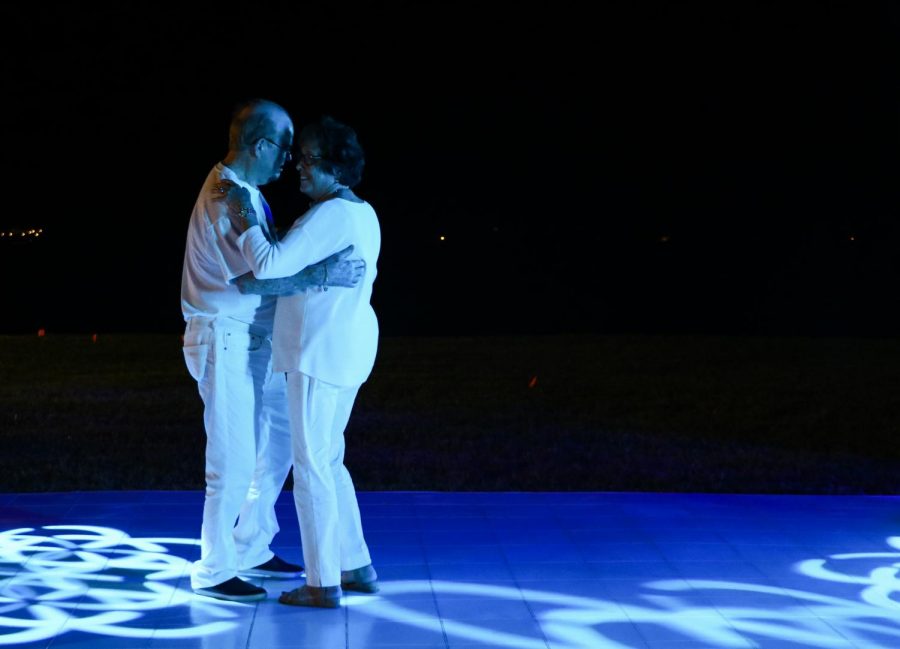 Amid looming clouds and swaying palm trees, a collection of white tables could not help but stand out. At the seventh annual Dreyfoos in White fundraiser, held at Curie Park on Oct. 19, attendees wore bird wings on their backs and decorated tables with replicas of Building 2 and even tennis nets. It was all in the hopes of raising funds for the arts programs.

Guests arrived within a few hours’ notice of the secret location and set up white tables with various themes. Through raffles and table sales, attendees raised money for the School of the Arts Foundation (SOAFI).

“It’s a great school,” founding principal of Dreyfoos Edmund Duhy said, “and a great school needs funding. Without the funding, we can’t do the artistic program, so it’s very important. Plus, it’s fun.”

Along with raffles and prizes for table decorations, student musicians and dancers performed.

“There’s a lot of hustle and bustle for the first half hour or so, and people started coming in,” strings senior Quinn Stolberg said. “And once everyone got settled, they were content and listening, and having food and drink, and it was nice.”

Many teachers, former teachers, and alumni attended. A Dreyfoos alumni band performed for the sparkler show, during which guests danced with sparklers on the dance floor.

Many of those in attendance have come to each of the seven annual events, supporting the programs students are able to participate in.

“I’ve been to all of them,” Mr. Duhy said. “I’m still on the Foundation. I love raising funds for the school. I enjoy it.”

For students, it’s also a special opportunity to perform.

“It’s the most highly touted quartet job [to] play Dreyfoos in White,” Stolberg said. “When Mr. Marshall asked us to play, [the strings quartet was] very excited. We’re really grateful to play here.”

Curie Park is also symbolic to the theme of the arts, since it was almost the location of a performing arts center.

“I had just come back from Sydney [Australia] to see the Sydney Opera House,” school founder Alexander W. Dreyfoos Jr. said. “I was with MIT’s president, Jerry Weisner, who used to be President John F. Kennedy’s science advisor. We were doing some fundraising for MIT and with them was Ian Pay, who did the Louvre [and] the east wing of the National Gallery. I said to him, ‘Wouldn’t this be a beautiful spot for a performing arts center?’ because the Sydney Opera House is right by the water.”

Ian Pay promised to design the performing arts center by Curie Park. This is why Mr. Dreyfoos believes the location of this year’s Dreyfoos in White, less than three miles away from Dreyfoos School of the Arts, is special.

“[It] would have been impossible,” Mr. Dreyfoos said, “but I was just learning, so we turned it down. Of course, the rest is history.”