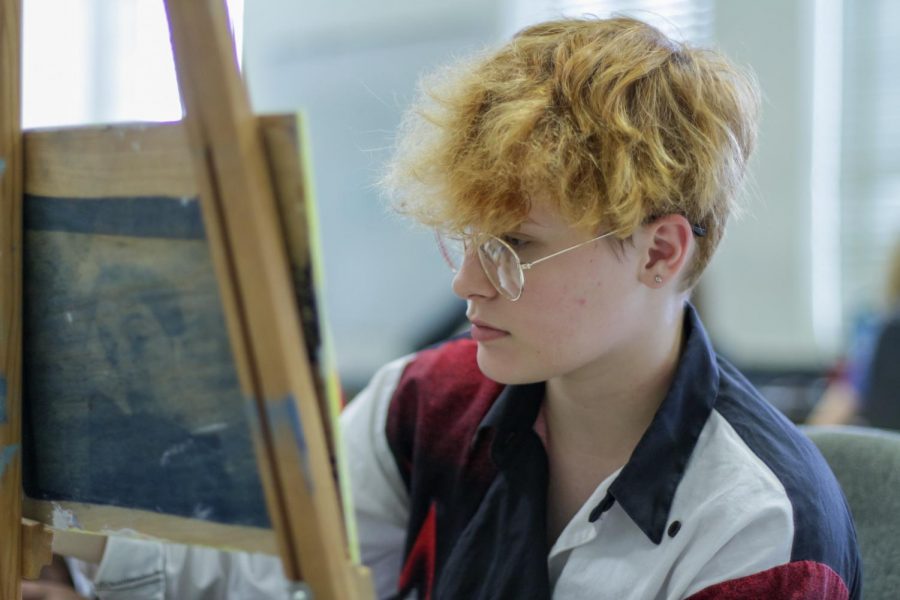 Digital media junior Ian Wood works on an acrylic painting for his sustained investigation project. “I wanted to portray animals which have histories of being menacing or fear invoking in an appealing way to nearly any viewer,” Wood said. “I guess the concept really stemmed from how people perceive me and how I try my hardest to appeal to others.”

Steam gathered along the rim of the silver pot, and a face appeared in the smoke. An eye peeked open to see colors seeping into cloth dunked in the solution. The fabric was almost engulfed in the green dye.  “Only a few more minutes,” digital media junior Ian Wood told himself after standing over the same pot for hours.

Wood entered his fashion pieces into the National YoungArts Foundation’s contest for student artists. As stated on its website, the mission of the National YoungArts Foundation is to identify “the most accomplished young artists in the visual, literary and performing arts,” and to “provide them with creative and professional development opportunities throughout their careers.” Although the foundation is known nationwide, it has a different meaning to Wood.

“I would call [YoungArts] a trampoline with the way that [it] boosts young artists,” Wood said. “It really motivates you to push yourself, go further, and take all the opportunities given to you.”

YoungArts accepts thousands of applications each year from students ages 15–18 in grades 10–12. Finalists can receive awards of up to 10,000 dollars, participate in master classes with notable artists, and become eligible for nomination as a U.S. Presidential Scholar in the Arts. Some of the 20,000 alumni include artists like Viola Davis, Josh Groban, and Kerry Washington.

“I’ve connected with [and contacted] a lot of different YoungArts alumni,” Wood said. Some notable alumni include Timothée Chalamet and Nicki Minaj. “Now, I have an entire network of other professionals.”

“I had just gotten into fashion, and I was very interested in something that could become my career,” Wood said. “A lot of the TV shows I watch, things I’m interested in, and pop culture [influenced me]. I just kind of mashed it all together, and out came the concept.”

Digital media dean Melissa Glosmanova taught Wood during his freshman year in her 2D Art class, where she noticed the distinction between Wood’s art and that of other students.

”What sets him apart from a creative standpoint is [that he is] not just doing photography and portraiture, but also dabbling in that world of fashion,” Mrs. Glosmanova said. “Marrying them in a way that is very unique to him … just absolutely sets him apart from everybody else.”

Wood uses his artistic identity in every contest he submits to. Along with YoungArts, he has submitted to Photofusion at the Palm Beach Photographic Centre, Canon’s photography contest, and more. Yet, YoungArts differs greatly from the other contests.

“I’ve never connected as much with the other artists, because everyone who’s there is very passionate,” Wood said. “It’s just so much different because everyone’s so into what they’re doing.”

Along with a possible $10,000 scholarship from YoungArts, there are many rewards that benefit the participant’s future careers.

“YoungArts is a fabulous opportunity for students to understand the submission process for their work,” Mrs. Glosmanova said. “There are a lot of different applications, not just for college, but in the professional world.”

After submitting, Wood got a call from his mom on the way home from school telling him the good news.

“I was really surprised because I just really didn’t think I was going to get it because of how young I was compared to everyone else,” Wood said. “I was on an adrenaline high for two weeks.”

Because of the recognition YoungArts has given him (along with the cash prize), Wood participated in Rhode Island School of Design’s Pre-College Textile Program over the summer, in which he boiled pits full of dyes and fabrics and used screen printing techniques. The program also included core classes that delved into design, drawing, and art history.

“[The classes] really deepened my appreciation for other art forms and introduced me to a multitude of different styles in my field,” Wood said.

Because of the program, Wood has gained a real world perspective on his artistic abilities, what art means to him, and his life experiences.

“[YoungArts has] definitely given me a purpose and a drive to wake up every morning,” Wood said. “It just makes me see the world in a different way.”

Watch out for more on YoungArts in Issue 1 of The Muse.