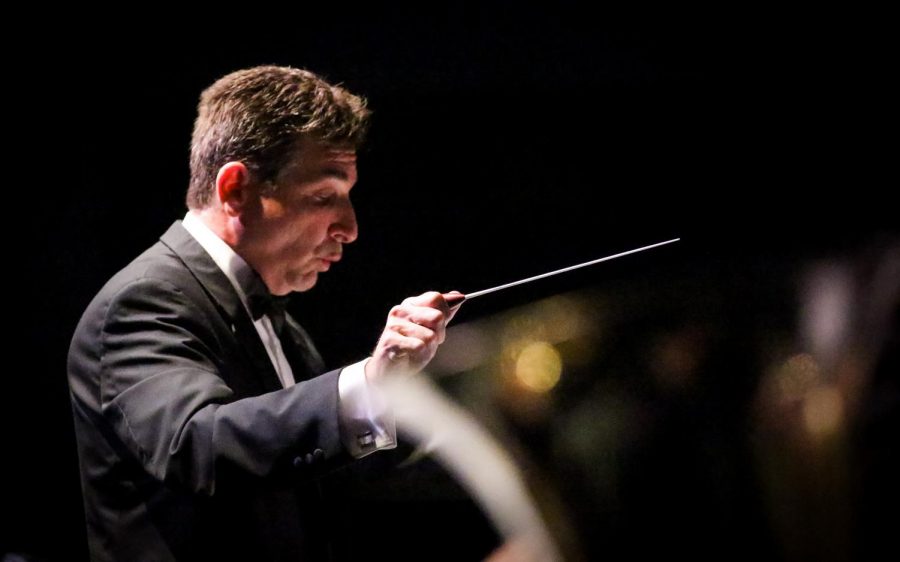 The band department began its school year with a literal bang. An ascending dissonant scale of trumpets, trombones, and French horns engaged in “Gavorkna Fanfare” by Jack Stamp—on Sept. 26 at 6 p.m. in Meyer Hall.

Band teacher Evan Rogovin started the concert with the Wind Ensemble, and Jazz Ensemble 1 joined after a 15-minute intermission. While the first concert showcased the department’s weeks of preparation, Mr. Rogovin also emphasized it as a learning experience.

“The first concerts are always difficult because […] you’re working on teaching fundamentals and basics, while also trying to get ready for performance,” Mr. Rogovin said. “It’s like building the airplane while you fly for that first concert.”

Along with integrating the basics, Mr. Rogovin created a new method to check his students’ progress on their pieces. Students are now required to upload videos of their practices.

“I’m trying to put more emphasis on the students to be more individually prepared, because […] they have to be really prepared to pull off [the first concert] because we continue to improve throughout the year,” Mr. Rogovin said. “It’s always baby steps, so to speak.”

Students in the fifth period ensemble class exercised different preparation techniques in anticipation of Thursday night’s performance. Wind Ensemble member and band sophomore Ellen Dahlstrom prepared for the performance by practicing independently before coming to class, where she perfected her parts while Mr. Rogovin made changes, she said.

The Wind Ensemble played contemporary pieces, and the jazz band added a different style in order to attract “a more diverse audience,” according to Mr. Rogovin. Band senior Skylar Margolin performed with the hope that the audience would leave with more of an appreciation for what musicians do.

“Showcasing skills to the audience is important because it gives Dreyfoos students the chance to share with others the reason they’re here,” Margolin said. “Playing for an audience makes all of the preparation worth it.”

When the curtains opened, Dahlstrom felt “a wave” come over her looking at the filled theater.

“It’s kind of exhilarating, especially if you have a solo or really exposed section coming up,” Dahlstrom said. “Your heart starts beating really fast. Then, when you play it, it goes beautifully, and it sounds amazing.”

In the same way the excitement rushed over the students, Mr. Rogovin connected to the performance.

“I have a blast when I’m on stage,” Mr. Rogovin said. “It’s a symbiotic relationship. They depend on me; I depend on them. Once I start, it’s like an out-of-body experience. All I feel is just me and the kids.”

After the performance, the audience left with an appreciation for the department’s “dynamic range,” as strings sophomore Elizabeth Abel said.

The audience got exposure to the students’ musical talents. Dahlstrom noted the department’s ability to unite friends, family, teachers, students, and faculty alike under a single cause: love of music.

“I think it’s important [that people come to these shows] because it exposes people to live music, which is something that people don’t get a lot now unless they pay hundreds of dollars for a concert ticket,” Dahlstrom said. “It’s pretty cool that we just sell $10 tickets, and it’s a great way for people to get exposed to live music performances.”